A developer wants to be allowed to apply to use a new housing project in Avila Beach as vacation rentals, but community members and county staff say existing vacation rentals in Avila are already so abundant that they're becoming detrimental to residential neighborhoods in the area. 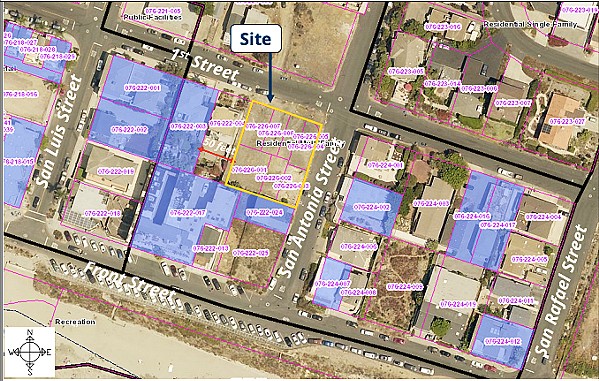 At a meeting on July 13, the San Luis Obispo County Board of Supervisors is slated to consider developer Erik Vasquez's request to repeal a condition of his Avila Beach housing project that prohibits vacation rentals in almost all units on the site. The condition, which was approved by the SLO County Planning Commission along with the rest of the project in August 2016, states that only one of eight residential units proposed for the site may be permitted as a vacation rental.

"Should the county desire to disallow short-term rentals in their entirety, I believe it should be done at a policy level and not ad hoc on a project basis as was done on my property," Vasquez, who represents applicant HDFT Investments, wrote in an appeal letter to the county in October 2020.

The project in question has already been under construction for years now and involved the demolition of three existing residences to make way for seven residential townhomes and one studio encompassed in four buildings.

Located at 217 1st St., the development is located near downtown Avila Beach and just a few blocks away from the beach, in a neighborhood that community members say is completely inundated with vacation rentals. After several Avila Beach residents brought up concerns about the project's potential to be used for tourists and visitors, commissioners added a condition limiting vacation rental usage to the one studio unit on site.

In October 2020, HDFT Investments and Vasquez applied to have that condition amended. The Planning Commission denied that request, and Vasquez appealed the decision to the Board of Supervisors just days later.

"For a point of information, given the number of short-term rentals in proximity to my property currently, I would not be granted a permit," Vasquez wrote in his appeal letter, "however one does not know what the future holds and I wish to be treated no differently than the surrounding properties."

But County Planner Young Choi said at the Planning Commission's hearing in October 2020 that vacation rental permits would likely never be granted to owners of the townhomes at 217 1st St. A county ordinance that regulates vacation rentals in Avila Beach limits the number of such establishments in certain areas, and Choi said there are already more vacation rentals in the 1st and San Antonia streets area than the ordinance allows.

Although Choi said those limits can be waived for applicants in special circumstances, he didn't find anything that would justify an exception in this case.

"Allowing a vacation rental on the project site and other similar properties in the area would cumulatively change the character of the neighborhood from a primarily residential area to a visitor-serving area," a county staff report on the project reads. "Therefore, the creation of more vacation rentals in this area of Avila Beach would degrade the quality and character of the residential neighborhood, effectively making it cumulatively more commercial (visitor-serving) in character, and thus degrade the quality of life enjoyed by neighboring residents who make the neighborhood their home."

For many of the same reasons, county staff are recommending that supervisors deny the Vasquez's appeal on July 13. Δ