Less than two months after San Luis Obispo County joined the U.S. and California in lifting a prohibition on commercial hemp production, SLO County supervisors will consider banning the crop again at a June 18 meeting. 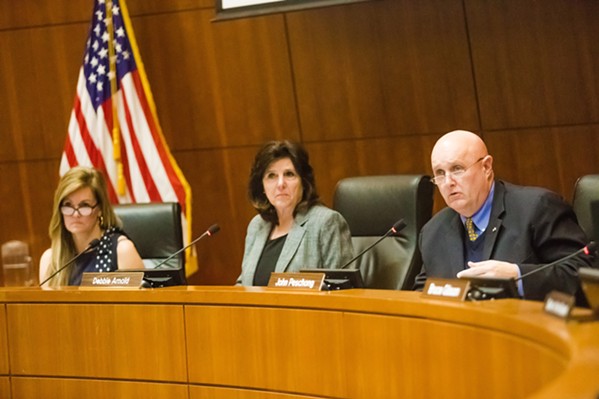 First District Supervisor John Peschong said some county residents have expressed concerns about the community impacts of growing hemp, including odor, and SLO's lack of local rules and regulations.

"We needed to look at all options and listen to the community," Peschong told New Times. "To me, it's all about neighbor-to-neighbor conflict."

In early May, SLO County legalized commercial hemp as statewide regulations went into effect for the industry. On Jan. 1, 2019, Congress removed hemp from the federal Schedule 1 controlled substances list.

Under the state's rules, county agricultural commissioners are responsible for registering hemp grows within their jurisdictions.

Since the local market opened, the SLO County Department of Agriculture has approved 14 hemp applications. All of those grows, according to Assistant Agricultural Commissioner Marc Lee, are for producing CBD, which is a non-psychoactive chemical in hemp that's used in health products.

"Everyone wants to grow for CBD," Lee said. "It's going to look very similar to cannabis and potentially the odors are similar. If they're growing for CBD, they're growing all the way to flowering."

The push for a hemp urgency ordinance came directly from the Board of Supervisors during a May 21 meeting. Peschong made a motion, which was unanimously supported, to agendize it, emphasizing the possible need for grow setbacks.

As proposed, the urgency ordinance would temporarily ban all industrial hemp cultivation with the exception of the 14 growers who already successfully registered in the county.

Urgency ordinances require four votes to pass (as opposed to a simple majority) and remain valid for 45 days, after which the board could renew it for another year.

Peschong said he will wait to hear more public input on June 18 before he makes up his mind about a moratorium.

"Everything's on the table," he said. "I want people to show up and enlighten us." Δ