The San Luis Obispo County Board of Supervisors resolved five months of gridlock on Nov. 7 and found a new county leader they could all agree on. 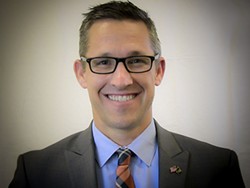 Horton, a military veteran who worked eight years in the SLO-area public sector and 11 as an engineer in private industries, will start his new gig as CAO on Nov. 15. He'll earn $331,871 in salary and benefits and oversee county operations and a staff of 2,800.

"Wade is the clear choice to lead us into the future," said John Peschong, SLO County 1st District Supervisor and chair of the board. "Even with our board's diversity, Mr. Horton's ability to obtain a 5-0 vote clearly demonstrates the confidence the board has in his leadership."

It wasn't easy to get that unanimous vote. The supervisors tussled over the CAO position, particularly when it came to hiring an interim CAO in the wake of previous CAO Dan Buckshi's resignation, according to 2nd and 3rd District Supervisors Bruce Gibson and Adam Hill.

The board considered an "outside" candidate for interim CAO who Gibson and Hill opposed, the supervisors wrote in a recent Tribune column, but the hire ultimately fell through. County Counsel Rita Neal declined to release the names of candidates considered for the interim CAO position to New Times, citing closed session confidentiality.

Horton takes over the helm as the supervisors continue to spar over issues ranging from cannabis regulation, to groundwater management, to budget priorities. Horton told New Times he'll be a steady presence amid the political roller coaster.

"As public works director, I worked closely with all five supervisors and developed a relationship and trust with all five," Horton said. "It's very important to provide unbiased support to the board and each board member. They each have issues that they're passionate about and want to get accomplished."

Horton said regardless of which policies the board ultimately adopts, it will be his job to carry them out to the best of his abilities.

"Once the decisions are made by the majority of the board, my job is to move forward and execute those policies," he said.

One of the first challenges on Horton's plate will be to patch together an agreement between the seven cities to build a new animal shelter. Paso and Atascadero recently pulled out of the project, but Horton believes the parties can resurrect the agreement with some more communication.

"Sitting down [with the cities] is probably a good first start," Horton said. "There's no question it's a better project with collaboration from all seven city partners." Δ