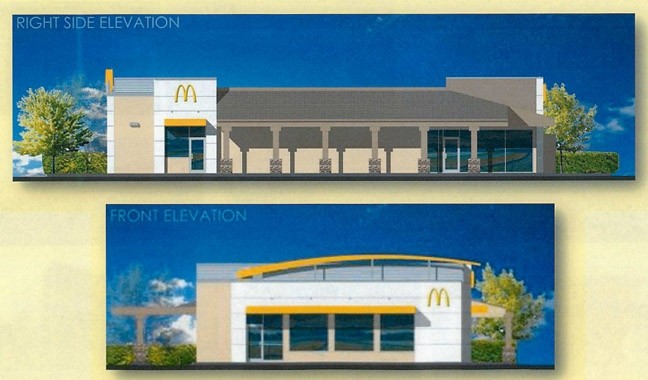 A multi-year march has ended under the Golden Arches.

On April 8, the San Luis Obispo County Board of Supervisors approved a contentious proposal to build a drive-thru McDonald’s restaurant in Los Osos.

The hearing dragged on for almost five hours, drew more than 100 attendees, and featured a torrent of public comment from Los Osos residents, most of whom were virulently opposed to the fast food outlet.

New Times counted 48 speakers during public comment, 33 of whom opposed at least some aspect of the McDonald’s project.

The board voted 4-1 to approve the restaurant, with District 2 Supervisor Bruce Gibson objecting to the drive-thru component, which he said was “a step back into the 20th century.”

The county Planning Commission had approved the restaurant but nixed the drive-thru on Feb. 6. The April 8 vote sided with a McDonald’s appeal of the earlier decision and re-inserted the drive-thru into the project.

Gibson made a motion to approve the project sans drive-thru, but failed to get a second.

“I cannot support a drive-thru,” Gibson said. “It’s not compatible with the Los Osos community character.”

The restaurant will occupy the old Bank of America building in the Vons Shopping Center at 1076 Los Osos Valley Road. The building has been vacant since 2005, and the property owner has been negotiating with McDonald’s since 2010.

Though approximately 15 speakers—some of them local McDonald’s employees—spoke in favor of the project and its positive economic impacts, most of the speakers slammed the restaurant.

Speakers labeled it a “Bob’s Big Boy abomination,” criticized it for having “horrid compatibility,” and predicted that it would “homogenize Los Osos” and create a “cultural dead zone.”

The six main areas of resident concern were the project’s compatibility with the surrounding community, traffic impacts, parking impacts, water use, the drive-through component, and wastewater impacts.

Though all the supervisors said they were sensitive to community concerns, the issue before the board was strictly regarding land use, and the supervisors who voted for the project said they couldn’t find a reason to deny this use.

After squabbling over the appropriate amount of water offsetting for the project, the board eventually agreed to require that McDonald’s offset 698 gallons per day through plumbing retrofits.

The Planning Commission also endorsed that 698-gallon figure, but environmental activists and project opponents at the hearing said that amount would not be sufficient to protect the strained Los Osos Groundwater Basin.

McDonald’s employees and supporters in the audience embraced in celebration after the final vote was taken late in the evening. As approved, the 50-seat restaurant will be open from 5 a.m. to midnight Monday through Thursday, and 5 a.m. to 1 a.m. Friday through Sunday.