Supes seek ban on marijuana dispensaries as board tension boils over

Update (Oct. 24): On Oct. 20, the Board of Supervisors continued its cannabis regulations hearing to Nov. 7.

After months of seesawing on how to regulate the marijuana industry in the wake of Proposition 64, the SLO County Board of Supervisors unveiled plans at its Oct. 17 meeting to ban all brick-and-mortar dispensaries in unincorporated communities. 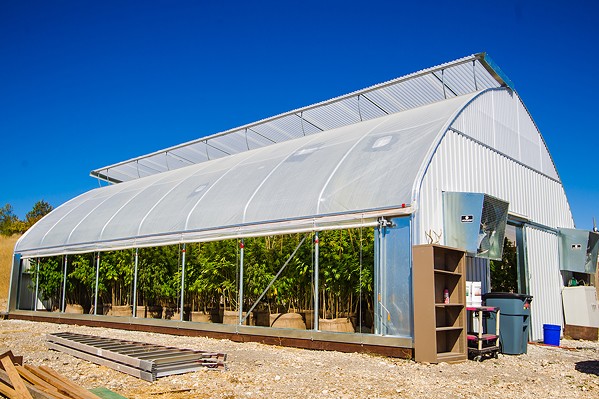 A final decision on adopting the ordinance was continued to Oct. 20 at 9 a.m., after dissenting 3rd District Supervisor Adam Hill refused to vote to extend the meeting past 5 p.m. Hill accused the board of making substantial revisions to the ordinance that hadn't been previously proposed or discussed, and therefore received no public comment.

"I think that's an abuse of process," Hill said, and later added that he thought it was a Brown Act violation.

In a series of "straw poll votes," Peschong successfully sought bans on medical and recreational cannabis dispensaries, the manufacturing and delivery of edible products for recreational uses, and any cannabis manufacturing using volatile substances.

Peschong, Compton, and Arnold said that the "mobile delivery" cannabis distribution model—currently the only legal means of buying and selling marijuana in SLO County—was sufficient for patients and recreational consumers going forward. Peschong said he was concerned about cannabis products in dispensaries attracting youth, and he was specifically critical of "gummy bears."

"I do believe in our county, they say the [mobile delivery] services work very well," Peschong said.

The county's current land-use ordinances already allow for the establishment of medical marijuana dispensaries, even though the county has rejected multiple applications over the years.

"This [dispensary ban] would be a step ," Supervisor Gibson said.

The board's direction ran contrary to the draft policy that was put before them, a culmination of many months of public and Planning Commission input, and it drew groans and gasps from a perturbed audience of mostly cannabis supporters.

When Peschong sought an outright ban on all edible products, both medical and recreational, in the county, an industry stakeholder in the audience muttered, "That's a HIPAA [Health Insurance Portability and Accountability Act] violation."

After Compton voted against allowing volatile manufacturing because she'd "seen the videos of explosions," the room howled with laughter, which was quickly rebuked by chairman Peschong.

The supervisors did not find time during the meeting to discuss restrictions on cannabis cultivation—which has been the most hotly disputed subject since it sets a cap of 50 total outdoor grows.

Acrimony among the board members boiled over several times, most intensely during a debate over whether to ban cultivation in the entire Carrizo Planning Area versus just the California Valley subdivision. When Supervisor Arnold described the state of the Cal Valley as "total chaos" after a recent influx of marijuana grows, Supervisor Hill responded, "I'm sorry you live in the nonevidential world," and then, while looking across the dais, said, "I see the little face you're making."

Peschong then called for a 10-minute break, and one citizen in the audience sighed and said:

"They're not serving the public."