The following article is only a portion of this special edition of New Times. Pick up this week's issue to see the rest!

Brian Singer graduated from the Cal Poly Applied Art and Design program in 1995 with hopes of becoming an accomplished fine artist. When he left San Luis Obispo for the professional world, he was hit by the harsh reality that very few artists actually make a living by hanging their work in museums.

Ten years later, Singer is running his own business in San Francisco, using his art degree like so many others as a graphic designer. But he's never let go of his passion to become an artist. Now, at last, Singer is nearing his goal, on the verge of making the big time, as his "art" begins to draw international attention. But, then, that may depend on your definition of art. 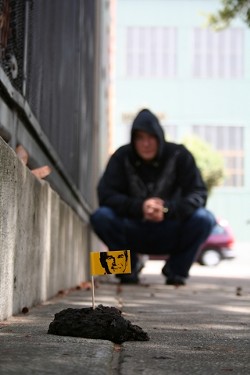 #One of two projects that have captured the popular imagination features a simple yellow flag - about 1 inch by 2 inches - depicting the face of George Bush, hoisted atop a thin, toothpick-sized dowel. The flag itself is nothing earth shaking, but the purpose of the yellow Bush flag has raised a few eyebrows and turned as many noses.

Singer, and anyone interested in downloading his flags from www.madeyouthink.org, are pounding the pavement from San Francisco to Shanghai staking these presidential pennants into steaming mounds of canine excrement: George Bush on a heap of dog crap.

Up until now, Singer has managed to keep his name separate from this potentially contentious campaign of self-expression, but crack detective work by New Times followed the trail of turds straight to the door of the this Cal Poly alumnus.

Online there are a wealth of stories detailing excrement incidents from around the world and linking up to Singer's web site, which includes a gallery of fecal photos but carefully omits the artist's name. Through these links, Singer has received a preponderance of positive feedback as well as requests for more free flags. Enthusiasts are also encouraged to download the PDF file and print their own flags, thereby saving Singer a bit of time and postage. Currently, he gets an average of about one flag request a day on his e-mail.

But for all the trouble of printing, assembling, and mailing these little yellow banners, Singer finds it all worthwhile, for the feedback has been about 98 percent favorable, he said. Very few people who are upset by the concept bother to voice their opinion, but those who do are often a source of amusement for Singer.

One of the more eloquently composed e-mails that Singer remembers said simply, "Fuck you. We're from Texas." A more well thought-out complaint challenged Singer to reevaluate his religious position and his relationship with God.

Many might just scoff at these putrid piles of pennant-posted puppy poops and say, "That ain't art." But Singer told an interesting story of the inspiration that led him down this shit-stained path.

Behind his urban San Francisco office, there's an alley that Singer passes every day walking in and out of work. In the alley dwell the dregs of humanity: the homeless, the miserable, the destitute derelicts of society. But what's worse, much worse, are the fresh stools that punctuate the alley like landmines; and we're not talking about dog poop anymore.

Try as he would to expunge this image from his creative mind, Singer just couldn't stop pondering the abject filth of human feces only steps away from his cozy cubicle. And suddenly the idea struck him.

"I connected the two things that disgust me the most on this planet: feces on the ground and George W. Bush," Singer recalled.

Singer's more palatable project - and one in which he takes greater pride, at least publicly - involves a far more erudite concept. He has sent 1,000 blank journals around the world, asking participants to fill in one or two pages, however they see fit, and then pass it along for someone else to do the same.

Ironically enough, the 1000 Journals idea actually originated under somewhat similar circumstances to the Bush flags. It was back at Cal Poly in the early '90s, in the Dexter building, which housed both the arts department and the ROTC. But it wasn't in the classroom where Singer found his inspiration; instead, it was in the restroom.

Between classes, Singer became captivated by the ongoing dialogue that covered the stalls of the school lavatory, the exchange of ideas between arts students and ROTC officers.

"To me, that was fascinating," Singer said.

So he started photographing the graffiti with plans to make a book out of it. But the more he thought about, the more he realized that such a book would have to be interactive; readers would need to have the opportunity to contribute their own crude commentary.

Then he decided to go completely interactive with a blank book in which anyone could write, draw or create. But one blank book could hardly be deemed a serious art project. There would have to be many - dozens, hundreds. Singer settled on 1,000.

Five years ago, he bought 1,000 journals, each 220 pages in length. Then he numbered them and began distributing them en masse. "This is an experiment and you are part of it," he tells people.

#The journals have been circulated all around the world, and are slowly filling up with pictures, poems, collages, and anything else people can think to contribute. In order to track the numbered journals, participants are encouraged to record their locations at www.1000journals.com.

The web site includes photos and brief biographies of individual journals, and even allows people to request a journal for themselves. As the project becomes increasingly well known, the opportunity to fill one of the 220,000 pages has become something of an honor, and people wait for months hoping to be mailed a journal from some far corner of the world.

Singer, who has seen only a couple of full journals at this point, commented on the unique personality of each booklet. In many cases, whoever started the journal seems to set the tone for the whole thing. For example, if the first page is done in collage, then the journal tends to be dominated by artwork. And if the first contributor treats it like a personal diary, then the journal will tend to be filled with writing and poetry, he said.

When Singer gets enough of the journals returned - he thinks 10-20 is a reasonable number - he plans to show them as a museum exhibition, something like a quilt or tile work of individual pages. Already, there is a film crew working on a documentary of the 1000 Journals project. They've traveled all over the world tracking down journals and interviewing people.

"They're filming in a number of countries," Singer explained, hoping to find "what the average Joe from Croatia thinks."

Singer expects the low-budget, independent film to come out some time around fall of 2006, primarily for film festivals. He's hoping to see a theatrical release shortly after that, and doesn't expect the movie to include any reference to the less tasteful flag project.

So far, Singer has managed keep these two projects disconnected, primarily to prevent his own political views from influencing the content of the journals or from discouraging potential participants.

"I would hate to have people find out that my political views are in the 49 percent and not the 51 percent."

But as both projects gain momentum around the global village, their paths were bound to cross somewhere. Singer was only somewhat surprised to see that connection made right here in San Luis Obispo.

Elsewhere, Singer's Bush flags have been connected, albeit erroneously, to a turd stamping crusade in Bayreuth, Germany. Police in this Bavarian town have spent months trying to determine how all the dog crap in the city park is being staked with miniature American flags.

Singer maintains that while he's not categorically opposed to such behavior, he's got nothing to do with it. His flags feature George Bush, not the stars and stripes. So Singer's whimsical protest continues, and he only hopes he doesn't end up in a lonely cell, writing to his diary about how the Department of Homeland Security came knocking on his door demanding an explanation.

Arts Editor Jeff Hornaday doesn't believe in defacing day-old dog logs with a visage of the president. Send your scoops to jhornaday@newtimesslo.com.