Has it really been 41 years since a 1 minute and 45 second song called "Bloodstains" ushered in a new, decidedly West Coast strain of punk rock? Yep. Agent Orange, the progenitors of surf punk, released a 7-inch, three-song EP that contained "Bloodstains," which fell into the hands of KROQ DJ Rodney Bingenheimer, who played the crap out of it and included it on his seminal 1980 Posh Boy Records compilation Rodney on the ROQ.

Suddenly this power trio out of Placentia in Orange County was the darling of the surf and skate scene, recording their 1981 debut album, Living in Darkness and later a 12-inch EP called Bitchin' Summer on Posh Boy, then signing to the bigger indie label Enigma Records where in 1983 they released the 12-inch EP When You Least Expect It ... and then their second studio album This is the Voice in 1986.

In addition to their originals, the band recorded punk versions surf classics such as the Chantays' "Pipeline" and other cover oddities such as Jefferson Airplane's "Somebody to Love." They signed to Restless Records, which released their 1991 live album Real Live Sound. Their third studio album, Virtually Indestructible, was released in 1996 on yet another label, Gunka Disc, which basically marked the end of their recording career aside from various 7-inch singles and inclusions on compilations.

Along the way, the band was a revolving door of musicians, the only continual presence being guitarist and singer Mike Palm (currently with Perry Giordano and Sandy Hansen). Original bassist Steve Soto left to form the Adolescents, former Social Distortion bassist Brent Liles did a stint before he was replaced by Sam Bolle, who jumped ship to join Dick Dale. All told, more than a dozen people have been Agent Orange members.

Even though they didn't record all that much and had continual band member turnover, Palm has kept Agent Orange alive with regular touring and staying true to their original punk ethos. You can experience their thunder when Numbskull and Good Medicine present Agent Orange at The Siren on Sunday, Aug. 22 (7 p.m.; 21-and-older; $16 presale at eventbrite.com or $20 at the door).

Get your yacht rock fix when Yächtley Crëw plays The Siren on Friday and Saturday, Aug. 20 and 21 (8:45 p.m.; 21-and-older; $22 presale at eventbrite.com or $25 at the door). The LA band delivers late-'70s and early-'80s soft rock hits such as Boz Scaggs' "Lido Shuffle," the Bee Gees' "How Deep is Your Love," Toto's "Rosanna," and more. Add in matching outfits and choreographed dance steps and viola! Campy fun!

"What you hear is the sound of friendship, hard work, imagination, and the hope to spread their message of love and the importance of having a good time," according to press materials.

By the way, if you were hoping to see The Brothers Comatose at SLO Brew Rock next Thursday, Aug. 26, and you haven't bought tickets, you're too late. It's sold out. 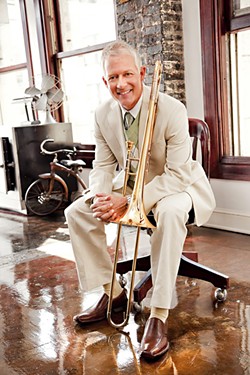 Concerts in the Plaza has been drawing sizable crowds, and this Friday, Aug. 20, expect another big gathering when folk power duo Bear Market Riot takes the stage (5 to 8 p.m.; all ages; free). This percussive, propulsive pair writes terrific originals and delivers a lot of sound for a duo.

The Famous Jazz Artist Series continues at the Harmony Café this Sunday, Aug. 22 (two shows at 3 to 4:30 p.m. and 5 to 7 p.m.; $25 per person plus a $10 food or beverage minimum; reservations at (805) 935-9007 or charlie@talsanusic.com), with famed trombonist Andy Martin. Matthew Evans (bass), Darrell Voss (drums), and series producers Charlie and Sandi Shoemake (vibes and vocals respectively) will join him. Martin is a member of Gordon Goodwin's Big Phat Band and was a featured soloist with Bill Holman for 15 years. He's also played in more than 350 movies such as Monsters, Inc. and La La Land, and is the trombone soloist for the character of Connie in Soul.

The Shawn Clark Family Band plays the Cass Winery Barrel Room this Sunday, Aug. 22 (4 to 6 p.m.; free but requires tickets available at my805tix.com/e/barrel-room-concert-shawn-clark-family-band/tickets). Clark delivers original heartfelt Americana as well as covers by the likes of Hank Williams Sr. and Marty Robbins. Inspired by Townes Van Zandt's version of the Rolling Stones' "Dead Flowers" in the film The Big Lebowski, Clark thought, "I want to write music that sounds like that." Now he does.

If you were hoping to see Incendio at Camp Ocean Pines this Sunday, Aug. 22, it's sold out, but tickets are now on sale for the next concert in the series, on Sunday, Oct. 17, with Jill Knight (2 p.m.; all ages; $30 general and $15 for kids at my805tix.com). Eric Williams (bass, vocals), Brynn Albanese (violin), and Tom Costa (percussion) will join Knight.

Comedians Steve Martin and Martin Short will tickle your funny bone this Sunday, Aug. 22, at Vina Robles Amphitheatre, with special guests Jeff Babko and The Steep Canyon Rangers (8 p.m.; all ages; $60 to $150 at vinaroblesamphitheatre.com).

Titled The Funniest Show in Town at the Moment, the performance promises to "redefine the form in unexpected and profound ways, from two of the funniest, most influential and acclaimed talents of the past century," according to press info. "Their humor is often subversive, but it's always a joyous self-deprecating romp from two comedy masters driven to make each other laugh as much as the audience. The jokes come at you at a rapid-fire pace with little setup and big punch lines as they mock Hollywood and the fickle nature of celebrity, but the comedy truly soars when they lovingly (and relentlessly) roast each other." Δ