Skateboarders and a few rollerbladers swarm around the skate park in San Luis Obispo’s Santa Rosa Park on a recent sunny Sunday afternoon; dogs frolick through the park; and children bounce around on the playground and the green grass.

On the roller hockey rink, the Central Coast Roller Derby (CCRD) is holding its annual Derby 101 Boot Camp, where new recruits in the Fresh Meat program are trained and prepared from tryouts to join one of the group’s several teams.

About 20 recruits and their trainers—many sporting black and pink, the organization’s colors—are moving through the basics of blocking, one of the most important skills in the full-contact sport. As two teams compete, each side has a jammer that circles the track, passing opposing players to gain points. Blockers try to stop the opposing jammer while clearing the way for their jammer. It’s one part racing, one part wrestling, and many parts grit—all on wheels. At the end of the rink, another group is being taught how to stand, and eventually to skate, while also being able to lean into the physical contact.

Before the daylong training concludes, recruits are prepared for the final exercise—five minutes of non-stop skating around the track. It’s a primer for one of the final tests that Fresh Meat eventually have to pass before qualifying for one of the teams—27 laps in five minutes.

“If you have to throw up, please don’t do it on the track,” says Pinball 5x5, one of the day’s trainers and president of the CCRD. Before they start, she gives a quick pep talk with a hefty dose of tough love.

As their reserved six-hour chunk for the rink’s use ends, team members pack up while roller hockey players roll on. Before they disband, one member pulls off the masking tape that marked the track’s oval boundaries, and just like that, it’s a roller hockey rink again.

In recent years, roller derby has seen the amount of accessible practice and competition spaces dwindle. Indoor facilities are costly or too small, and public surfaces that were once multiuse have been improved or converted in ways that favor one sport or another. Basketball courts at Meadow Park in SLO were resurfaced with a rubbery surface designed to reduce impact on the body, which, coincidentally, isn’t good for rolling around on. In Paso Robles, the outdoor roller rink in Centennial Park was converted in 2014 to be used for another up-and-coming sport—pickleball.

Now, a critical mass of pickleball aficionados with the Morro Bay Pickleball Club (MBCC) are looking to follow suit and put up funding to help the city convert the roller rink at Morro Bay’s Del Mar Park into permanent pickleball courts. In November, the process got an initial go ahead with a 4-2 vote by the Morro Bay Recreation and Parks Commission and is scheduled to go before the City Council on Feb. 23 for final approval.

If that site is converted to permanent pickleball courts, says Pinball 5x5, also known by her real name Dawn-Marie Little, then the CCRD will be left with only one place to play—Santa Rosa Park—during limited hours.

That prospect makes them nervous as they prepare to kick off their 10th season with a special anniversary bout on Feb. 27. So far, they only have Santa Rosa Park reserved for half the season, and other possible venues—like a building at the California Mid State Fair grounds—are too expensive.

“We’re a little nervous about our season,” Little says. “We have made commitments with visiting teams to host them, but we don’t actually know if we have a place to play yet.”

Once that’s sorted out, the bigger challenge is to figure our where their competitive and junior teams practice.

Kathy Thomas, who founded the MBPC and is an ambassador for the USA Pickleball Association, said that pickleball players in Morro Bay, who set up temporary nets and play during a reserved time two hours a day, six days a week, feel the pain.

“Right now it’s simply not accessible, except the two hours a day when we set up and take down,” she said. “We have a lot of people that want to play on the weekends or play after work, but they can’t because the nets aren’t set up.”

For that reason, Thomas and the MBPC are pursuing permanent courts that, like a tennis court, will always be there for those who want to play. The club originally looked for multi-use opportunities, including striping tennis courts at Monte Young Park, but tennis players rebuffed that. Then, they turned their eye to permanent possibilities.

Pickleball is similar to tennis, though it’s played on a much smaller court with a small paddle and a ball similar to a Wiffle ball. It’s fast paced, social, and relatively cheap and easy for a beginner to pick up. All of those factors have made it the fastest growing sport in America.

In the last few years, brand new pickleball courts and complexes have been built in communities and racket clubs across the county, some hosting well-attended tournaments. Still, the sport’s growing popularity has outpaced the process required to fund, approve, and build the appropriate infrastructure.

Now, the growing MBPC also wants to upgrade from the temporary setup they’ve used since the sport came to Morro Bay in late 2014. Many of the members are retired, politically savvy, or both, so they’ve been very well organized.

At first, the club was looking to build a 12-court facility, which would both make Morro Bay eligible to host sanctioned tournaments and also avoid displacing other sports. The proposal was put in the form of a Local Economic Action Plan, or LEAP, a new city program designed to stimulate economic and community activity. Building a tournament-grade facility would make Morro Bay a pickleball Mecca, the club said, and bring much-needed revenue to the city through tourism. 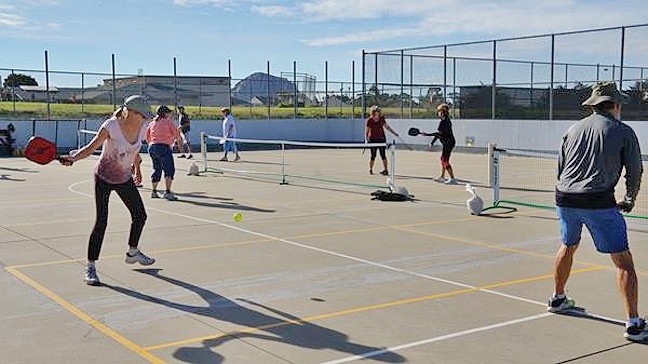 Those hopes fell short however, because the construction of new courts was either too expensive or the property’s owner wasn’t willing to give up the space.

That left the Del Mar Park roller rink as the only feasible site for permanent courts, and now the proposal before the City Council in February includes resurfacing and installing four permanent courts (two temporary courts are set up on the adjacent basketball court during play days).

“Where all this is coming from is related to funding challenges,” said Morro Bay Deputy City Manager Sam Taylor, who also heads the recreation department, at the November rec and parks meeting. “The entire discussion that we’re having literally comes down to just that one issue.”

Taylor said that because of the economy, grant funding is limited and very competitive, which makes meeting a wide variety of community needs a very difficult balancing act.

“The problem we have is when we’re trying to maximize the use of our space, we have a new user group that is large, they are continuing to grow, and they want more time, and they want a facility that is professional, and right now we’re not really providing that,” Taylor said.

Simply put, converting an existing surface is much cheaper than building an entirely new set of courts. The current proposal wouldn’t bring the economic stimulation that pickleball enthusiasts were hoping for, but it would give them a permanent, around-the-clock place to play, Thomas said.

Thomas is adamant that the club’s intention is not to displace roller derby—the club conducted surveys of how often the rink was used by whom, and she said that as far as they knew, roller derby didn’t use that rink, and that no one has reserved the site in a long time.

That’s not the case, according to Little. She said there are members of CCRD that use the rink once or twice a week to practice—though that’s generally during spring and summer months when there’s still daylight in the evening. Reservations haven’t been made in a long time because the different user groups were good at sharing.

While numbers do show that the MBPC has more people using Del Mar Park more often than roller derby, or any other sport, Little feels the pickleball players’ frustration of having limited facilities, but she doesn’t want that to lead to the loss of yet another multi-use space.

“We’re hoping that they’d look at other places to play pickleball, instead of taking over the only multi-use court that’s left,” she said. “I feel like there are a lot of other options, but people are refusing to consider them.”

Thomas’ husband, Robert, however, sees it differently. In November, he told the Recreation and Parks Commission that they should cater to the majority, and that pickleball is more accessible than roller derby.

“The needs of the many does outweigh the wishes of the few,” he said. “Everyone can play pickleball … . This is not an elite program for a few old rich folks; this is a program for everybody in this town.”

Members of CCRD, however, worry that an additional squeeze can make a big impact on those who have depended on roller derby, which they’ve said has become a support structure for survivors of domestic abuse and health issues and young people who have struggled with emotional or self-esteem issues. These are the folks who say they’ve found the strength to overcome their personal battles through participating in roller derby.

“Derby provides our players with a loving, non-judgmental family. Some players on our team feel like derby is the only family that they have. It’s important that we be there for them, and it’s important that we have a practice space so we can actually be there,” said a CCRD member named Ali, captain of the Junior Devils team, at the November Recreation and Parks Commission meeting. “I hope that as a community we can come together to realize that this park is important for everyone, and is not just important for one specific sport.”