As a big fan of weird, I like a band with an outlandish concept, which is exactly what Surfer Blood exhibits on their 2010 “Swim” video, which starts with lead singer John Paul Pitts being woken up in bed by his bandmates and fans who lift him crowd-surfing style through his own apartment where they shave him, brush his teeth, and strip him, sending him down the stairs and out the door in his tightie-whities. Then he runs through town to a laundromat where he steals clothes and keeps running, encountering strange characters before he runs into a concert hall and is crowd-surfed to the stage, where he takes his position as lead singer and finishes off the anthem, “Swim to reach the end, but I am steady not to offend. On whom can you depend? Swim to reach the end.”

The lyrics are impressionistic: “Lucid afternoon dream. Cosmopolitan scene. Look at what’s in store for me. Heads will turn in disbelief.” It’s all about attitude for this West Palm Beach, Flo., alternative rock outfit, whose debut single “Swim” was named 37th on Pitchfork’s 100 Best Songs of 2009. The track appeared on their 2010 debut album Astro Coast and propelled the band to a series of festivals. In 2013, they released their sophomore effort Pythons, and earlier this year their third album, 1000 Palms, hit the streets.

They’re one of two upcoming Good Medicine Presents shows this week, and this first one happens Saturday, Jan. 9, at Cayucos Vets Hall (8 p.m.; all ages; $16 presale or $18 at the door; ticketfly.com).

West Coast favorite Cayucas will open the show. The Santa Monica-based act was formerly known as Oregon Bike Trails and features twin brothers Zach and Ben Yudin. If you check out their self-titled video, you’ll catch scenes of both So-Cal and the Central Coast, including Cayucos and Morro Rock. Another video, “East Coast Girl,” features scenes filmed at the Madonna Inn, including on its pink basketball court and some of its gaudy rooms.

Sunny and breezy, Cayucas’ sound will offer a light counterpoint to Surfer Blood. They’re really fun, and the closest local touchstone I can offer is Fialta. Both are bands you can’t help being buoyed by.

Good Medicine’s other big show this week is Reel Big Fish on Tuesday, Jan. 12, at the Graduate in SLO (7 p.m.; all ages; $20 presale or $22 at the door), with Suburban Legends and The Maxies opening.

Huntington Beach’s Reel Big Fish wasn’t always the ska-punk juggernaut we know today. When the band first formed, they started as a Led Zeppelin cover band called The Fischer King, but then lead singer Ben Guzman left and backup singer Aaron Barrett took center stage and changed the band’s direction. Their debut album, 1995’s Everything Sucks, became an underground hit, and soon the band was signed to Mojo Records and their single “Sell Out” was in heavy MTV rotation.

The band remained signed to major labels through 2005, but in 2006 they decided to eschew the label model in the face of cataclysmic music industry changes … and they were also dropped by Jive Records, but who needs ’em, right?

Their live shows are legendary: humorously juvenile with their great originals and hilarious covers of New Wave, pop, and even metal tunes. Hey, with album titles like We’re Not Happy ‘Til You’re Not Happy, what else would you expect? Since going independent, the band has released Monkeys for Nothin’ and the Chimps for Free (2007), Fame, Fortune, and Fornication (2009), and Candy Coated Fury (2012).

“This album is a lot like our first two albums,” Barrett said of Fury in press materials. “It’s got a lot of the same intensity, frantic energy in the music, and the same sarcastic sense of humor. I think these are the fastest songs we’ve done since those albums. We’re finally just doing what Reel Big Fish does best, and that’s what we did on those first two albums. It’s hateful, mean, sarcastic, and sometimes-sad lyrics over happy, wacky, silly, joyous, fast music that makes you want to dance. This album is mostly love songs, but bitter, angry, hateful love songs. Just about everybody knows what it’s like to be in a bad relationship. These songs could be sung by a 15-year-old about his first love-gone-wrong, or by a 55-year-old about a bitter divorce after 30 years. They’re bad-relationship songs that everybody can relate to.”

By my estimation, they’re about ready for a new record, so maybe there’ll be some new material in the offering, too. Skank on!

And do yourself a favor and visit goodmedicinepresents.com, where you can see all their upcoming shows that include Jeff Bridges (Jan. 16), Paul Thorn (Jan. 24), and several SLO Gathering shows featuring groupings of our best local performers.

Bay Area jam band veteran Scott Cooper is a man of many side projects, but when he plays Mr. Rick’s this Friday, Jan. 8, at 9 p.m., he’ll be in the incarnation of Scott Cooper & The Barrelmakers playing an album release party for his new CD Batik in Blue.

As he notes in press materials, the CD will appeal to fans of the likes of The Grateful Dead (Cooper Plays in the Dead tribute act The China Cats), String Cheese Incident, Railroad Earth, David Lindley, Little Feat, and other jam-style acts.

Should be a great night of California music.

Legendary Central Coast swing-jazz combo The Viper Six plays two upcoming shows: On Saturday, Jan. 9, they’ll be tearing down the house at Paso Robles’ D’Anbino Cellars from 8 to 10:30 p.m. (reservations at 227-6800); Friday, Jan. 15, they’ll be swingin’ again for the Atascadero Performing Arts Center Committee’s Jazz in January show at the Colony Hall of the Best Western Plus Colony Inn in Atascadero from 6 to 9 p.m. (reservations at 712-9824). 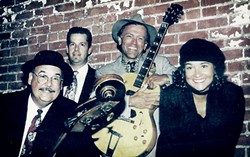 “We’ve been playing shows around these parts for the last 15 years, beginning at the first of the century in joints like the Frog and Peach Pub and moving up to a regular Saturday night presence at the world-famous Madonna Inn, where we attracted great crowds of young Lindy-hoppers (and ultimately got fired for bringing in too many lively dancing fans!),” claims frontman Ted Waterhouse. “We’ve also starred at three SLO Concerts in the Plaza shows, several Pismo jazz festivals, and stirred things up at the Mother’s Tavern Sunday swing shows every month until that place was sold and moved away from live bands. Since those days, our group has been more elusive, making an appearance here and there but never entirely dropping out of sight.”

In addition to guitarist-songwriter Waterhouse, the band has featured three lead vocalists over its lifetime, including Christine Tavares (now in the LA area) and Miz Buffy (aka Sharon Doran) who recently retired from the group. Now with the return of vocalist Emy Bruzzo, “who used to wow the swing faithful in the Madonna Inn days,” according to Waterhouse, the group has found a new burst of life and activity. “Emy has been keeping busy singing and acting lead roles in local shows such a Evita and Walkin’ After Midnight with the Pacific Light Opera Theater, Chameleon Productions, SLO Little Theater, Brickyard Theater, and the Central Coast Shakespeare Festival,” Waterhouse said. “She serves as choral director at Atascadero High School. Still, she’s pretty excited about being back in the local swing music scene with The Viper Six.”

“This is my favorite era of music. It’s always great singing to a roomful of swing dancers,” Emy says.

Robert Alberts will be on trumpet and Bob Osborn on saxes and clarinet as well as the crack rhythm section of Darrell Voss on drums and Travis Harms on upright bass. Get out there and swing it! 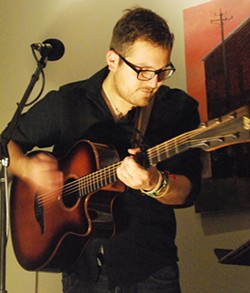 Pianist and Music Department Chair W. Terrence Spiller performs a benefit recital this Friday, Jan. 8, at Cal Poly’s Spanos Theatre, starting with two sonatas by Ludwig van Beethoven: the Sonata in F Major, Op. 10 No. 2, followed by the Sonata in D major, Op. 28, also known as “The Pastorale.” Francis Poulenc’s “Les Soirées de Nazelles” follows, and the evening concludes with five préludes from Sergei Rachmaninov’s Préludes Op. 23 and Op. 32. Tickets are $9 for students and $14 for the public, with proceeds benefiting the Music Department Scholarship Fund. Tickets at 756-4849.

Bakersfield ska, funk, and reggae act The Easy In plays the Frog and Peach this Friday, Jan. 8 (10 p.m.; 21-and-older; free), delivering their patented high-energy performance replete with originals horn-driven skank-worthy tunes. If you like The Slackers, Skankin’ Pickle, and Oingo Boingo, check ’em out.

Josh Hill of the Phoenix-based band The Hill in Mind is out on solo tour and will roll through SLO for a show at Frog and Peach on Wednesday, Jan. 13 to promote his upcoming solo album Hill Never Sing Again. These are great, literate, whimsical tunes—childlike and full of wonder, like the opening track “Little Boy, Liar,” which sounds like an autobiographical memory of childhood. Spartanly accompanied, some are spoken word such as “Failed Music,” which reminds me of a King Missile song. This guy deserves to be heard in a quite room.