A surfer has got to be able to get to exactly the right location to catch good waves. Now the hands-on owners of a new local surf store are placing a high-dollar bet on the value the right spot can have on retail. 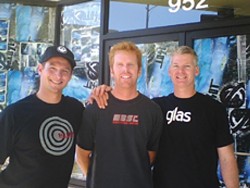 # San Luis Surf Co., an offshoot of the Morro Bay Surf Co., off Highway 1, is opening up in the 3,000-square-foot space formerly occupied by Meridian, on the corner of Morro and Higuera.

Anthony Randazzo Jr., the co-owner along with longtime partner Nathan Ditmore and new partner Tim Cowan the owner of Morro Bay's Pizza Port and a 25-year employee of Wavelengths said he understands that he'll be moving to SLO's "corporate corner," where his neighbors will be Victoria's Secret, Abercrombe & Fitch, and the Apple Store.

That kind of visibility comes with a price tag over $4 per square foot.

But Randazzo says it's a bet worth taking, especially now that Central Coast Surfboards is slated to move from its longtime Higuera Street location into a spot on Marsh.

That faith comes in part from the addition of Cowan to the company. Though Randazzo and Ditmore they also run a silkscreening business called Synergy believe they have strong contacts among young surfers, Cowan has more contacts among the graying surf crowd: "The middle-age surfers from 30 to 60," Randazzo said, "They're the higher end customers. That's really what Wavelengths had that we didn't [in Morro Bay.]"

Now that they've got the location, the owners said they're devoted to establishing street cred with the surfing and boarding community. They'll do that, Randazzo said, by focusing on the boards and wetsuits that draw real surfers into shops over the sort of "soft goods" such as clothes and shoes that are the primary moneymaker in the industry.

"If you have three surfboards and all clothing, people deem you a weak surf shop," he said. "We are going to be 100-percent customer service based we're owner-operated and we're in the water every day, so we know what we're talking about."