A slightly pineapple-scented store is sprinkled with surfboards and skateboards, its walls are lined with countless photographs of Central Coast surfers, perfect barrels, and surf-related quotes from classics like The Endless Summer and Fast Times at Ridgemont High. For more than 40 years, Central Coast Surfboards has supplied locals with all things surf, skate, and snowboard, and new owner Scott Smith plans to continue that legacy with pride. 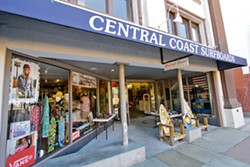 After ending a 15-year partnership with Arts Cyclery, Smith started thinking about his next move. He's been riding the waves San Luis Obispo County has to offer since 1991, and he said the shop has always "been a cool place for surf culture on the Central Coast." In the shop's humble beginnings, former owner Mike Chaney sold boards out of his Cal Poly dorm room in 1975. After bouncing around to a few downtown locations, Central Coast Surfboards landed on Marsh Street nearly 10 years ago.

When Smith approached Mike and Whitney Chaney about their succession plan out of sheer curiosity, he had no idea that conversation would've sparked change so quickly. But as of Aug. 11, he's been operating the shop on his own. At the time, the Chaneys didn't have plans to sell CCS, but the Chaneys said that when Smith came to them with the proposal, they said they knew it was the right thing to do not only for themselves, but for Smith and for their customers as well. To Smith, it was the best-case scenario to take over a shop that he's grown fond of over 25 years.

"My relationship with this store has always been out of a position of respect. I've really just liked the spot, so I approached Mike to see what his succession plan was. For Mike, it's his life's work. It's a huge responsibility to take on a store. I'm not just buying a store and seeing how it goes, I have to take it on and carry on his tradition," Smith said.

While the owners have changed, the heart and soul behind CCS is here to stay. The near future holds new products and community-based events for the store, fostering a commitment to bringing locals together in and out of the water. Moving forward, Smith invites those who haven't visited the shop in a while to come in, check out the history of surfing in San Luis Obispo, and get yourself a board—the water's just fine along the coast. And he would know; he surfs daily, wherever the waves are.

"The foundation of this store is to be sure that our customers are respected, taken care of, and always appreciated. We just supply the culture, equipment, and the vibe," Smith said.

• KCBX Central Coast Public Radio received a $5,000 grant from the Community Foundation of San Luis Obispo County. Starting this fall, reporting will be heard as monthly, four-minute features airing on KCBX during NPR's news magazines Morning Edition and All Things Considered. Some longer segments will be produced for KCBX's weekly local program, Issues and Ideas, which focuses on newsmakers on the Central Coast.

• Anita Williamson donated 25 backpacks filled with school supplies and treats through Jack's Helping Hand for children returning to school this fall. Her gift supports families whose children have cancer, disabilities, and special needs. Williamson previously donated Mother's and Father's day gift cards to the parents of the families served by Jack's Helping Hand. To learn more about how you can support Jack's, visit jackshelpinghand.org. Δ