At a Jan. 6 Grover Beach City Council meeting, city staff reviewed the results of the 2019 community survey, data the city says will help it gauge where community members stand on pressing issues in Grover Beach, including a potential public safety sales tax. 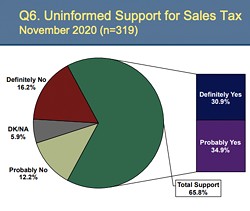 According to a city staff report, about 30 percent of those surveyed said they would definitely vote in favor of a half-cent sales tax increase in the November 2020 election to help fund essential public safety services. More than 34 percent said they would probably support such a ballot measure.

"For a special tax, which this is written as, that's an OK place to be," said Bryan Godbe, president of Godbe Research.

Godbe's research firm was hired to conduct Grover Beach's most recent survey in 2019 and its first in 2017, and he said at the Jan. 3 meeting that a special tax like the one Grover Beach is proposing needs a super majority to pass. Considering the survey's 5 percent error rate, support for the sales tax increase could truly range anywhere from about 62 percent to 72 percent of all Grover Beach residents.

"If you were to put this on the ballot," Godbe said at the meeting, "there's substantial work to be done."

But if the measure were adjusted and rewritten as a general tax, it would only need a simple majority to be approved and, according to the survey results, it likely would.

As written currently, Godbe said revenue from the tax would go toward public safety services, including maintaining rapid response to emergency 911 calls, crime prevention services, and youth violence prevention programs. If the city added road and infrastructure repairs to its revenue uses, it could argue that the measure is a general tax.

That would be a win-win, Godbe said, because Grover Beach residents surveyed dubbed repairs to roads, streets, and infrastructure their No. 1 priority in both the 2019 and 2017 surveys.

The only issue that came anywhere close to second place in both surveys is homelessness, and while residents said they were generally satisfied with almost all other city services, they reported being unhappy with the city's efforts to repair and maintain city streets.

"In terms of city efforts to improve overall perception of satisfaction and overall quality of life," Godbe said at the meeting, "you're going to get the most bang for your buck by continuing your efforts on repairing streets and roads."

Council members didn't hint at whether they planned to follow that advice.

The 2019 community survey cost the city $30,000 and covers a wide range of topics, and during the data collection process, Godbe Research contacted hundreds of residents representative of Grover's overall demographics and conducted 23-minute interviews with each over the phone, online, and through text messages.

Grover Beach City Manager Matthew Bronson said that like the 2017 survey, the 2019 data will be used to inform policy, budgetary, and operational decisions.

"It's a representative sample of the community to zero in on where the community feels we need to put our focus," Bronson said at the meeting, "and that will help inform our council and staff in meeting those needs." Δ