The ukiyo, or “floating world,” is the artful term used to describe the pleasure and entertainment milieu of Japan’s Edo period. The buoyant nickname evokes a sense of the ethereal—a dream world sufficiently elevated from drab daily life, but not so high up as to be inaccessible. This is exactly the kind of physical and aesthetic alchemy offered by SLO County’s own airborne auteurs, Suspended Motion Aerial Arts.

Since last fall, we’ve seen a number of strong—and I don’t just mean the brawn it takes to keep oneself aloft via aerial silks—Suspended Motion performances, including the Haunted Circus last Halloween, the sexy Circus Cabaret for Valentine’s Day, and their Earth Day Aerial Showcase, which doubled as a fundraiser for Pacific Wildlife Care. Now they’re lifting off with their third annual full-length performance, which this year will be Eventyr: Elemental Force.

This classic tale of dark versus light introduces the characters of Luna (Alex Milaychev, who also directed and contributed some of the floor choreography for the show), and her sister, Hope (Ryanne Howard). These suspended siblings must battle the evil Mirilith (Stephanie Bailey) to be reunited, in a storyline that dips into the best of the monomyth to create a framework for Suspended Motion’s gravity-defying gymnastics. Think of the plot like you might a story ballet, as basic instructions to guide you through a whirlwind of spectacular movement. 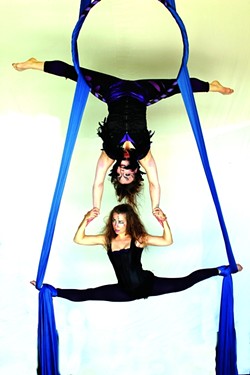 The “elemental force” of the title includes the classic four: earth, water, air, and fire. These are personified in Eventyr as Terran, Rayne, Gayle, and Ember, who come to Hope’s aid as she struggles against Mirilith’s malicious designs. These elementary “emissaries,” portrayed by a range of cast members in an ensemble style, enhance the circus-like nature of the performance. And while there are many national and international companies to satisfy the flying-circus connoisseur, some of which even breeze through town from time to time, the artists of Suspended Motion are unquestionably the premiere local levitators.

The show is written, choreographed, and produced by Suspended Motion Aerial Arts co-owners Regina Penton and Elizabeth Stevenson, who founded the organization in 2009 in an effort to combine their dual passions for athleticism and artistry. “We are incredibly proud to present Eventyr: Elemental Force,” Penton says in the show’s press release. “We have worked tirelessly for months to orchestrate a dynamic, dramatic show full of vibrant and memorable characters that will capture audiences’ imaginations.”

Eventyr features more than 30 local performers in a blend of floor choreography and airborne efforts to create a pageant of the elements only Suspended Motion could conceive. The aerial acrobatics will include use of hoops, cubes, and silks for a floating circus worthy of the aforementioned ukiyo. “Our entire troupe, including an incredible lineup of skilled aerialists, has put heart and soul into this year’s performance,” Stevenson adds. “We hope audiences love watching it as much as we have loved producing it.”

Come fly with them on June 14 and 15 at the Clark Center in Arroyo Grande. With all these elements in place, they’re sure to reach new heights.

Arts Editor Erin C. Messer flies through the air with the greatest of ease at emesser@newtimesslo.com.