I’m in Suspended Motion’s cavernous studio space at the end of Suburban Road, where long, colorful silks hang from the extra high ceiling all the way down to the hard, cold floor maybe 20 feet below.

Co-owners Gigi Penton and Liz Stevenson are telling me all about their upcoming show, Carnival of Phobias, which promises to be a grand display of strength, grace, and creepiness. 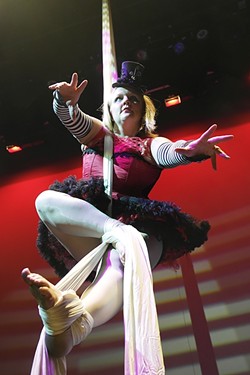 They plan to explore common fears—such as agoraphobia (a panic disorder triggered by environmental anxiety) and coulrophobia (a morbid fear of clowns)—through aerial dance and other circus arts.

This is their third annual Halloween show, the first having come about when a former student suggested they focus a Halloween show on professional-level performance rather than their typical studio shows, which are open to all their students, whether they’ve been studying for two weeks or two years.

“You can’t be complacent. It’s a high-risk dance form, a high-risk art form. It’s very physical,” Penton says of the performance, “but we’ve been preparing since August, and we’ve tried to construct the show so that performers get a rest between acts.”

“These pieces require the strength of gymnastics and the grace of dance,” Stevenson explains, who along with Penton is also a performer.

How do they come up with their themes?

“We change them every year,” Stevenson says. “The first year … ”

“ … was spiders and ghosts,” Penton finished.

“A haunted toy box,” Penton interjects, “like a teddy bear with a missing eye, creepy dolls, that sort of thing.”

These two ladies clearly spend a lot of time with each other, finishing one another’s sentence, for instance.

“Carnival of phobias—we’ve never done that before,” Penton says. “Fear of heights, what’s that one called?”

So what’s with the PG-13 rating? Too sexy or too scary?

“It’s because it’s creepy,” Stevenson says. “We’ve made a few kids in the audience cry. If you have a kid who doesn’t like to see balloon animals popped in front of him, this might not be the right show.”

“The creepiness is more generated from anticipation than anything else,” Penton explains. “I don’t like horror personally, but this is more creepy, mysterious, enchanting, and humorous. It’s dark humor, but it’s still there.”

Some of the creepiness comes from music choices.

“Some of it sounds disturbing,” Stevenson admits.

“Some of it sounds upbeat, but then you start listening to the lyrics and you think, ‘Oh, that’s just weird,’” Penton says.

And how do you make aerial dance creepy?

“Bent lines instead of long lines, a lot of hangs that really depict the feeling of having gravity pulling you down with nothing underneath,” Penton adds.

Yeah, gravity. Is acrophobia the same as fear of falling? Visit Carnival of Phobias, where if the performers have acrophobia, they’ve overcome it.