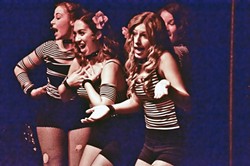 “All the world’s a stage,” Shakespeare proclaimed in his gender-bending comedy, As You Like It. Now, it’s probably more apt to say, "All the world is Shakespeare." Try as you might to escape his thumb-biting clutches, thou can’t elude him. In film, television, literature, the novelty sock industry, and even on the white-cotton front of a pair of men’s briefs you can buy on the Internet, there is the Bard. His influence is preeminent, and it is this very phenomenon that Suzy Miller and co-creator, Robyn Metchik, have tapped into with their new show at the SLO Little Theatre, Play On!

Miller, a long-time choreographer on the Central Coast, has always been fascinated by Shakespeare. Over the phone, she told me some of her favorite films and musicals: West Side Story, 10 Things I Hate About You, The Lion King. Their common denominator? An Elizabethan playwright. So, when Miller and Metchik, whose previous credits include a tribute to Bob Fosse (Razzle Dazzle), began brainstorming a new show, there was only one choice.

“Shakespeare is like a prism, you can see so many different things from so many different angles,” Miller said. Indeed, variety is what underscores Play On! In its structure, choreography, and musical choices, there is no denying Miller’s description of her show as “six degrees of Shakespeare.”

From the opening number, the ambitious scope is set. Absent is any mournful soliloquy or “Two households”-style prologue. Instead, we get “Cell Block Tango,” from the not-at-all-related-to-Shakespeare musical, Chicago. Why? Wait a minute. Listen to the lyrics. In place of the usual murderers' row, we get the names of Shakespeare’s leading men—Macbeth, Caesar, Hamlet, etc.

In ripped fishnets and under the heated glare of the red lights, the female cast dons their best Fosse swagger, while spouting lines like “Some men just can’t hold their Ides of March.” They finish, the lights darken, and a slideshow about Shakespeare’s cultural legacy begins that ranges in subject from Laurence Olivier to The Simpsons. This is, more or less, how Miller and Metchik’s show works—dance number, info session, comedy sketch, repeat. The effect can be, as Horatio in Hamlet expresses, “wondrous strange.”

To be fair, there was warning of this show’s weirdness. When asked for specifics, Miller replied that Play On! was a little “hard to describe,” that it was a “hodge-podge,” and “eclectic.” True to her word, the variety act can sometimes seem like a haphazard curio closet for anything, closely or tenuously, linked to the English dramatist. One minute, castmember Claire Gretlein accompanies a sweeping balletic number with an angelic rendition of “Kissing You” from the 1996 Romeo + Juliet soundtrack. The next minute, the audience is playing “Guess the Baz Luhrmann Movie?” with the cast. In one scene, the cast performs a refreshing acappella version of Lorde’s “Royals” and, in another, there’s an all-out tribute to Elvis. Put together, it can be a little jarring and more than a little confusing.

However, separate, there are moments of true pleasure and awe. In the comedic numbers especially, you can sense Miller’s irreverence and the cast’s infectious enthusiasm. Take the “Iambic Pentameter Suite.” This is a sketch that shouldn’t work. It begins with the definition of iambic pentameter (a series of unstressed, stressed syllables for those of us not currently studying for an AP English exam), demonstrated by way of tap dance, and ends with a gutsy, ensemble stomp routine.

Again, this all feels a little kooky, but that is its charm. An explanation of iambic pentameter using tap dance seems like the kind of hare-brained scheme drummed up by a self-described “fun” teacher, looking to liven up a dead class. To Miller’s credit as a choreographer and to the cast’s credit for their boundless exuberance, it is an inventive number only outdone by the show’s aerial dancing.

Yes, if Elvis, West Side Story, sonnet recitations, and excerpts from The Lion King weren’t enough, there is aerial dancing. Right when the frenzy of the ensemble dances and information slides (did you know King James I was obsessed with witches?) build to the point of overwhelming, Miller slips in two separate scenes of graceful acrobatics. In particular, when Shaley Gunther weaves her way through the silky drapes, she creates something far more bewitching than anything the three hags from Macbeth (ahem, Scottish Play) could conjure.

“Somehow, it melded into this solid alchemy,” Miller said of Play On! And, in some respects, she’s right. With a cast of only 14, a space as small and intimate as the Little Theatre’s, and in a two-hour running time, Miller and Metchik throw the world on a stage. Janis Joplin, Duke Ellington, The Great Gatsby, a lecture on Elizabethan diseases, flips, jives, and a Shakespeare quote-off—they may not always meld the way Miller intends, but there is an audacity and affection here that commands respect. Or, as the Bard himself said, “Though this be madness, yet there is method in it.”