"Mamas sigh when children cry/ You don't know the half of it child/ It's alright, it's ok/ on your side you got time/ By and by you'll come to find/ your own way// Drawn in a palm/ a lifeline goes on/ like a river source to delta/ It don't pause/ when it comes across/ a time zone or a border," Ray Bonneville sings in "Roll it Down."

With his well-worn voice, well-picked guitar, and haunting harmonica sounds, Bonneville is the quintessential traveling troubadour, born in French-speaking Canada and raised in the U.S. from age 12 (where he moved not knowing a word of English). He served a stint in the U.S. Marine Corps and Vietnam, worked jobs as a Boston cabbie and a flight instructor, and eventually scored opening gigs for the likes of B.B. King, Muddy Waters, and Dr. John. He currently calls Austin, Texas, home—even though he spends much of his time on the road, crisscrossing the U.S., Canada, and Europe. 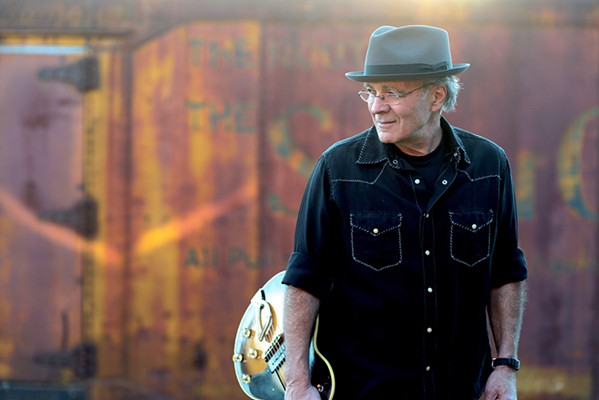 On Tuesday, Jan. 15, Bonneville makes his way to the Painted Sky Concert Series for an evening with Sacramento musician Richie Lawrence (keys, accordion, and vocals), in an intimate performance in the Cambria recording studio (8 p.m.; all ages; $20 at Boo Boo Records, Ball & Skein, or by calling (805) 927-8330, or at the door if not sold out).

In addition to being a New Orleans-influenced blues-folk proponent who keeps his sound stripped to the essentials, he's also a masterful raconteur whose road-warrior lifestyle is a source of endless anecdotes. He came a little late to his solo career of original music, recording his first album, On the Main, in 1992 even though he'd been working the blues scene since the '70s. His 1999 album, Gust of Wind, won a Juno Award (the Canadian Grammy). His post-Katrina ode, "I Am the Big Easy," won the International Folk Alliance's 2009 Song of the Year Award. In 2012, he won the solo/duet category in the Blues Foundation's International Blues Challenge. He's no slouch!

He's currently touring in support of his ninth solo album, 2018's At King Electric. If you like songs about hard living sung by someone who knows, look no further! This is going to be a great show. 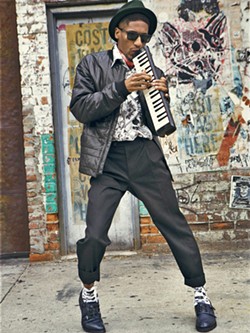 He's the flyest dresser with the coolest kicks, a master of all things keys, and New Orleans royalty. I speak, of course, about Jon Batiste, the musician, bandleader, and musical director of The Late Show with Stephen Colbert, who will play the Performing Arts Center this Saturday, Jan. 12 (8 p.m.; all ages; student and adult tickets from $41.60 to $72 at calpolyarts.org or by calling (805) 756-4849).

Expect an intimate solo piano concert from a performer dripping with charisma. And don't be surprised if he gets up from behind the piano to bust a dance move and play the "harmonaboard," a harmonica-style wind instrument with an abbreviated keyboard. The talented performer is also the artistic director at large of the National Jazz Museum in Harlem.

In what I'm calling a bold move, Good Medicine Presents and Numbskull Productions have booked three different shows for next Thursday, Jan. 17, becoming their own competitor! All three sound pretty damn good! Would you rather see Paul Thorn in the Fremont Theater, the Randy Rogers Band in the Alex Madonna Expo Center, or the New Breed Brass Band at The Siren?

Paul Thorn (7 p.m.; 16-and-older; $30.83 at fremontslo.com or eventbright.com) is a real Southern gentleman who delivers rootsy, deep-fried, rocking country blues. Raised in Tupelo, Mississippi, the son of a preacher who grew up singing in church, Thorn was also a skydiver, furniture maker, and boxer whose claim to fame was losing to four-time world champion Roberto Duran on national television. 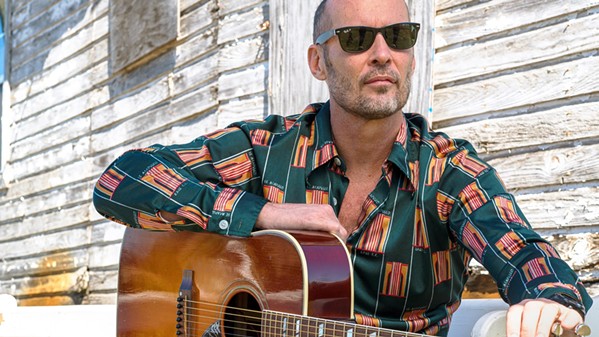 Thorn is currently touring in support of his 11th album, Don't Let the Devil Ride, which he called in press materials "the culmination of my whole life in music, coming back to my roots." The gospel album features guests such as the Blind Boys of Alabama, the McCrary Sisters, and Preservation Hall Horns. "My message on this record is 'let's get together'—I want to help lighten your load and make you smile."

I've seen Thorn a few times now and he never fails to put on an amazing show. The ladies especially seem to like him! Alice Drinks the Kool-Aid will open the show.

If you'd rather boot scoot and boogie to some classic country, check out the Randy Rogers Band at the Madonna Inn Expo Center (6 p.m.; all ages; $27 presale at Boo Boo's and ticketfly.com or $30 at the door). This super tight country band can heat it up or deliver a sweeping ballad. The Texas quintet—vocalist/guitarist Randy Rogers, guitarist Geoffrey Hill, bassist Jon Richardson, fiddle player Brady Black, and drummer Les Lawless—has delivered songs of loss, love, and, above all, truth on 2016's Nothing Shines Like Neon.

"No matter what, trouble always finds us," Rogers said in press materials. "And that title honestly sums up the last two and a half years of making this record. At times it cuts deep and you can hear the pain, but it's honest, it's real. On the flip, we like to have a good time and you can hear that too. "

You can expect some new songs, too. They've been in the studio with Dave Cobb working on an album slated for release later this year.

Over at The Siren in Morro Bay next Thursday, you can witness the phat sounds of the New Breed Brass Band (7 p.m.; 21-and-older; $12 presale at Boo Boo's and ticketfly.com or $15 at the door), which "lives and breathes the culture of New Orleans, infusing funk, rock, jazz, and hip-hop into a custom-made enhancement of second-line brass band tradition," according to their bio.

"That's what we came up under," said snare-drummer Jenard Andrews, of second line bands like the ReBirth, Dirty Dozen, and Lil' Rascals Brass Band. "Now we're trying to take that sound and bring in some new stuff and expand it. We bring outside influences like Earth Wind & Fire and Brass Construction, trying to interpret a different song for every genre, and make it all our own sound."

There you have it! Make your choice! Southern blues, rock, and gospel; Texas country; or NOLA second line jazz!

Numbskull and Good Medicine Presents also has Oingo Boingo tribute band Dead Man's Party playing The Siren on Friday, Jan. 11 (7:30 p.m.; 21-and-older; $20 presale at Boo Boo's and ticketfly.com or $25 at the door). This octet delivers the sound and energy of the former SoCal staple fronted by Danny Elfman. 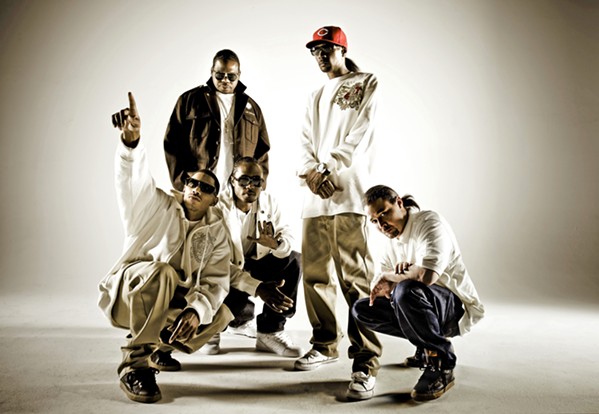 The Música Del Río house concert series presents Alice Wallace on Friday, Jan. 11 (8 p.m.; all ages; $20 donation; call (805) 466-6941 for reservations and direction). Wallace was selected as one of 12 Folk Alliance International-West premier showcase artists this year. She's been compared to Emmylou Harris and Patsy Cline. Steve Ornest will accompany her. 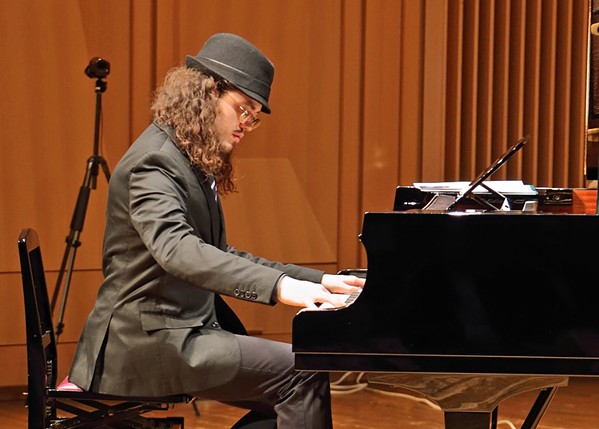 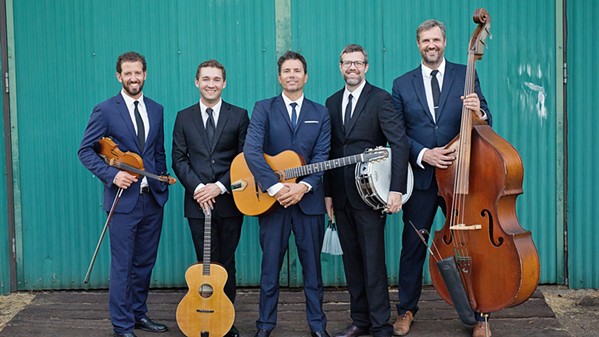 The Hopi Blues Band will back Muddy Waters' son, Mojo Morganfield, on his first California tour on Sunday, Jan. 13, at Morro Bay's The Siren (doors at 6:30 p.m.; 21-and-older; $15 presale at Boo Boo's and ticketfly.com or $20 at the door). Morganfield is touring in support of his debut EP, Mojo Risin'. Δ