The U.S. legal system can be a confusing, scary, and downright dangerous thing. Without a professional to act as a guide through those choppy waters, it can be all too easy to get lost in the overwhelming tide of legalese. Unfortunately, legal help is extremely expensive, and those who need it most are often the ones who can’t even imagine being able to afford it. 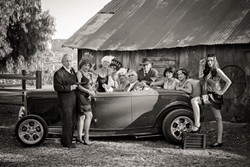 In 1992, a group of local legal professionals and other do-gooders decided that they would do whatever they could to help increase access to legal assistance for underprivileged local folks, even when they didn’t have the funds to pay for it. This group formed a nonprofit with the catchy appellation of San Luis Obispo Legal Alternatives Corporation (SLOLAC).

Though SLOLAC has been steadily growing since its inception, it has largely flown under the radar. So SLOLAC development director Mary Meserve-Miller is strategizing ways to get the word out about SLOLAC’s services in 2015. And what better way to start a fresh year of growth for the nonprofit than a massive fundraising fete, complete with food, refreshments, auctions, and live music?

This isn’t just going to be any old New Year’s party, though; the people at SLOLAC have way too much class to throw up some balloons and streamers and call it a day. They’re going all-out on a roaring ’20s speakeasy party with flappers, a jazz review by Meserve-Miller’s Legends, and photo shoots in a “speakeasy set.” Even the menu is ’20s themed.

“It’s really easy to give attention to a ballet company, or a theater group, or an orchestra—those are fun, sexy causes, and good ones,” Meserve-Miller said. “But to help frail elderly veterans and homeless—now that is a very serious cause. We’re helping extremely vulnerable people who have nowhere else to turn.”

According to Meserve-Miller, though SLOLAC aims to help anyone in need of legal help, education, or representation, the group has a special focus on helping the elderly.

“A lot of what we’ve done in the past is helping vulnerable senior citizens,” Meserve-Miller said. “It is serious stuff; there’s a really rampant problem that people don’t like to talk about and don’t give a lot of attention to.”

This is a topic that hits close to home for many, including Meserve-Miller herself. Meserve-Miller said that she was drawn to SLOLAC when her father, Papa Herky was almost conned by a $10,000 scam.

“There are a lot of wonderful causes, but we really need to take care of our seniors—especially our impoverished seniors,” Meserve-Miller said. “Think about grandma and grandpa, we want these people taken care of.”

SLOLAC’s speakeasy soiree will be held at 6 p.m. on Saturday, Jan. 3, at the San Luis Obispo Country Club. Call Mary Meserve-Miller at  547-0882 for tickets and go to slolegalalternatives.org to find out more about SLOLAC. Mention New Times and Meserve-Miller will give you the tickets for $80 instead of $100.

The holidays are a time of giving, which means this season is the perfect opportunity to support the county’s many nonprofit organizations. At the ninth annual Needs ‘N Wishes Holiday Fundraiser big hearted people will have an opportunity to help out three different local nonprofits—Maxine Lewis Memorial Shelter, Transitional Food and Shelter, and SLO Noor Clinic—all of which seek to aid the county’s homeless. There will be all sorts of attractions such as “Mrs. Claus’ baked goods,” a “children’s Xbox One raffle,” “Santa’s toy store,” which will apparently be different from “Elf’s gift store,” a silent auction, choirs, folk dancing, live music all day, and something called “Rudolph’s kitchen.”

There’s no admission fee at the event. It will be held from 10 a.m. to 7 p.m. on Dec. 16 at the South Bay Community Center—2180 Palisades Ave.—in Los Osos. Every penny donated at the event will go to those three homeless-helping nonprofits.

Intern Cliff Mathieson will be throwing his own roaring ’30s New Year’s party; it’ll probably be kind of depressing, though. Send your business and nonprofit news to strokes@newtimesslo.com.