Sweat, tears, and dye: A 5K run left me blue and feeling accomplished

I like to say my decision to try and take up running was a 2016 New Year’s resolution that I decided to attempt roughly four months into the actual new year.

The decision was born from a combination of both the inspiration of seeing my mother run multiple half-marathons over the last three years and the dawning realization that being a working writer keeps me cripplingly sedentary. Until I can talk my bosses into buying me an awesome treadmill/desk combo, I don’t think that will change anytime soon, hence my belated interest in getting out and moving a little more.

That’s what brought me to Orcutt Community Park Aug. 6. I’d signed myself and my girlfriend up months ago to participate in a 5K Run to Know More organized to benefit the North County Rape Crisis and Child Protection Center. After spending some time following the popular Couch to 5K online running program, I figured it was time to get out and put my decidedly amateur skills to the test. 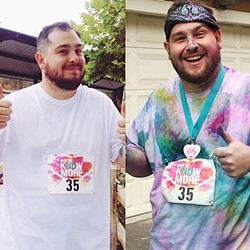 It wasn’t just any 5K. This was a color run, which meant we would be doused with brightly colored cornstarch as we made our way along the course. We were hit with the first of the fine, colored dust just before the race started, and as I watched the bright patches bloom on my shirt, I immediately realized why so many of the other runners had placed their phones in plastic sandwich bags. “A rookie mistake,” I thought to myself as I gingerly blew a thick layer of neon green powder from my phone and started running.

A 5K isn’t a particularly hard or far run, a little more than 3 miles, but going from absolutely no activity at all to running one still takes a little work. As I made my way along the looping route of the race, stopping briefly for a rest or to move through the stations and get hit with more powder, I was actually surprised at my pace and endurance. As I neared the end of the run, I was grateful that I’d actually taken the time to “train” over the past month or so. 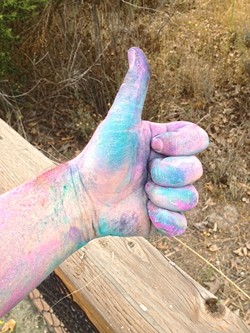 During that same time, I also learned that a surprising number of writers I admire turn to running. W.H. Auden, Joyce Carol Oates, Don DeLillo, and Haruki Mirakami are/were runners, and a small but absurdly grandiose part of my ego harbored hope that if I opted to join the cult of running, maybe a little of their talent would rub off on me. So far, while I will occasionally wake up sore from a run the previous day, I have yet to crank out anything resembling White Noise or 1Q84.

I crossed the finish line at The Run to Know More winded but happy that I actually followed through with a goal I’d set. I was covered in about eight different colors from head to toe (with blue dominating), and got my medal before heading out. Surprisingly, the first thing I did after getting home (and after scrubbing off as much of the color from myself as I could), was look up future races. I’m not sure at what point the modest amount of running I was doing each week changed from a groan-inducing chore to something I actually look forward to, but the combination of enjoyment and exercise is fairly alien to me—and I’m glad that I found something active that I actually like. I hope to continue to run for a long, long time.

Staff Writer Chris McGuinness still can’t get all that colored power off himself, but he can be reached at cmcguinness@newtimesslo.com or on Twitter at @CWMcGuinness.