San Luis Obispo city election candidates Cherisse Sweeney and Abrianna Torres have jumped out to a commanding lead in campaign fundraising for the Nov. 3 contest—together outraising the race's 10 other candidates combined, according to Sept. 24 disclosure forms. 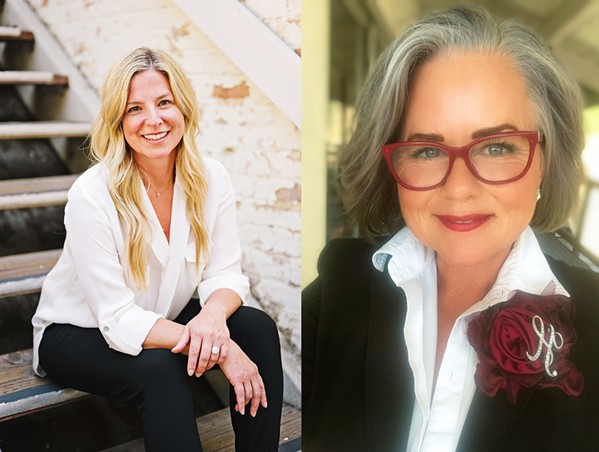 The remaining candidates logged $51,330 in combined contributions (a few did not file by a Sept. 24 deadline, indicating they did not receive donations), with incumbent Mayor Heidi Harmon raising about $25,000.

The two campaign finance leaders—both challengers in their respective races—are economy-centric allies out of the business community, who emerged as candidates after the COVID-19 crisis.

"What I do think we're lacking right now in this next phase for our city is it needs to be run like a business," Sweeney told New Times in early September. "It wasn't even so much that our council wasn't doing a good job. It was OK, tomorrow is going to be a new beginning."

With their lawn signs often next to one another, Sweeney and Torres reported several of the same donors, ranging from business owners and professionals, to retirees, to local conservative politicians like 5th District SLO County Supervisor Debbie Arnold and 4th District Santa Barbara Supervisor-elect Bob Nelson.

According to their disclosures, the two candidates have tapped the same political consulting firms to help run their campaigns—one of which, Pacific Coast Strategies, worked on the opposition to 2018's Measure G to ban fracking and new oil wells in SLO County.

Per SLO city election rules, a candidate may not accept more than $300 from one individual throughout an election cycle, with some exceptions for immediate family. Δ