Supporters say gun violence is out of control in the U.S., and that the Democratic senators’ proposed laws would help reduce it. But others—including Tacti-Cool Guns manager Joe DeGeus—don’t see it that way. 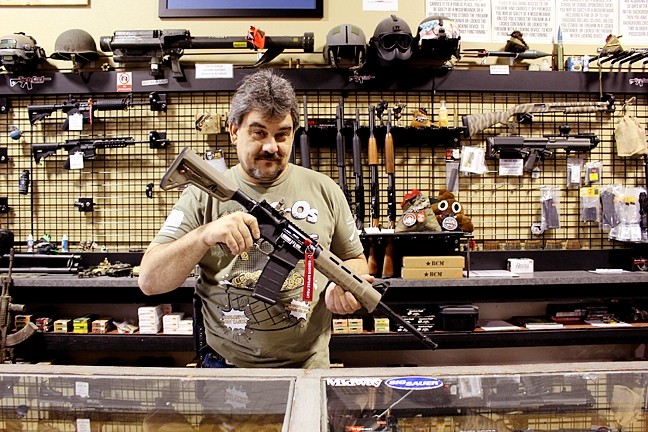 DeGeus stood behind the glass casing at Tacti-Cool in Santa Maria, gripping an AR-15 rifle. It’s one of Tacti-Cool’s more commonly sold firearms, but come January 2017, it could be reclassified as a banned assault weapon in California.

Should the gun restriction bills recently passed through the Senate become law, the AR-15 would join more than half of Tacti-Cool’s inventory in prohibition. DeGeus would likely lose his job.

He eyed the potentially endangered rifle and tapped his hip, where a pistol is concealed beneath his shirt.

“Just like my pistol, just like any hunting rifle—one shot, one pull,” he said of the AR-15, a semi-automatic rifle. “So how is that different from any other gun? Just because it looks evil?”

It’s a sensitive topic, and not a black-and-white one: Which guns are the most dangerous? Would banning them curb gun violence? Would it encroach on people’s constitutional rights? And in general, are guns more harmful than they are helpful?

These questions have loomed over lawmakers for years, but last month, California’s top Democratic senators decided they’d tip-toed around the issue enough—it was time to do something about it. Their 10-bill package cracks down with mandated background checks for ammunition purchases, a ban on large-capacity magazines (defined in California as those holding more than 10 bullets), and a ban on the manufacturing and sale of semi-automatic firearms with detachable magazines.

The Central Coast has suffered its own share of gun violence in recent years. Santa Maria saw 14 gun-related homicides in 2015 and January of 2016, according to Police Chief Ralph Martin. The second anniversary of the Isla Vista massacre, in which four people died from gunshots and three died from stab wounds, was on May 23.

And the Senate’s proposed new gun restrictions raise a question: Could stricter firearms laws have saved those lives lost to gun violence?

Elliot Roger, the shooter in the 2014 massacre at Isla Vista, legally purchased his Sig Sauer P226 9 mm semi-automatic pistol from a commercial gun store on March 12, 2013, according to the Sheriff’s Office’s investigative summary. More than a year later, he used it to wound five people and kill four, including himself.

San Luis Obispo resident Richard Martinez, whose son Chris was the final victim in Roger’s rampage, spearheaded a campaign for gun control following the Isla Vista shootings. He spoke at a press conference the day after the tragedy, demanding legislators to take action.

“You don’t think it’ll happen to your child until it does,” Martinez said at the conference. “His death has left our family lost and broken. Why did Chris die? Chris died because of craven, irresponsible politicians and the NRA [National Rifle Association]. They talk about gun rights—what about Chris’ right to live?”

He then established what would become the slogan for his campaign: “Too many have died. We should say to ourselves, ‘Not one more.’”

Some argue that the recent regulations passed through the Senate might have prevented the massacre had they been enacted years ago. Under Assembly Bill 1135, for example, Roger would not have been able to legally purchase his Sig Sauer. It would have been classified as an assault weapon and therefore generally prohibited from possession or transfer.

Still, he could have purchased a revolver.

At his desktop, DeGeus spent a few moments perusing YouTube before finding a video of Jerry Miculek firing eight shots from a revolver over the course of one second—a record-breaking feat.

“You tell me,” DeGeus said. “What’s more dangerous? A semi-automatic, or a revolver?”

He claimed people stigmatize semi-automatic weapons as more dangerous, when it’s not necessarily true. He gestured to a Sig Sauer 9 mm—the same gun Roger used—laying atop the shop’s glass casing.

“This is just an inanimate object,” he said, “no different than a pen that I pick up off the street and start writing with. I can take that pen and I can go out and create all kinds of chaos by what I write, or I can stay home and write pretty poems.”

Weapons such as Roger’s have popped up in gang-related gun violence in Santa Maria over the past couple of years, Police Chief Martin said. But those firearms aren’t necessarily purchased by their users. They’re usually either stolen or legally purchased by someone related to the gang and handed off to different people over time.

Martin said that from his observations, the Senate’s proposed bills wouldn’t even touch gang-related gun violence.

“In my opinion, being in this business for 40 years, it’s not going to have any effect,” he said. And not only that, but he said citizens should own their own guns to use for self-defense—“I’m a big Second Amendment proponent.”

According to DeGeus, the only way to find the solution to gun violence is for both sides to approach the issue maturely.

“Too many times, we’re demonized, or the other side’s being demonized,” he said. “I see it all the time, both sides picking on each other, and it’s ridiculous. Because guns transcend all political lines. I sell guns to liberals. I sell guns to conservatives, everybody. They all want guns. And we have to think about why.”

Bills passed through the Senate on May 19

• SB 1235 and AB 156 would require the California Attorney General to maintain information about ammunition transactions and ammunition vendor licenses.

• SB 1446 would criminalize the possession of any large-capacity magazines, regardless of the date they were acquired.

• SB 1407 would require people who build or own homemade firearms to apply to the Department of Justice for serial numbers.

• SB 894 would require the reporting of theft or loss of one’s firearm to a local law enforcement agency within five days of realizing the gun is gone.

• AB 1176 would make the theft of a firearm a grand theft and the buying or receiving of a stolen firearm a misdemeanor or a felony.

• AB 1511 would limit the loaning of a firearm to a spouse or registered domestic partner, child, sibling, grandparent, or grandchild.

Sun Staff Writer Brenna Swanston can be reached at bswanston@santamariasun.com.