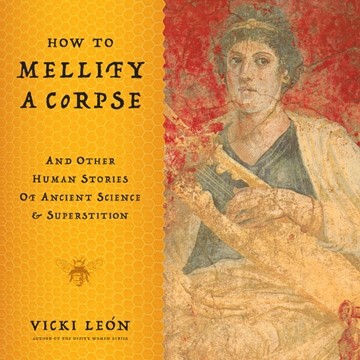 This summer, travel across the seas and through the centuries with Vicki León’s new book How to Mellify a Corpse. Riveting stories of such ancient sciences as mathematics, medicine, and physics are interwoven with mythology and superstition. Modern society is tied to the ancient world by countless threads of knowledge that are taught as basic principles. As León says, “history is really about people, not wars and dates.”

Read about Greece’s Pythagoras, who developed a mainstay of geometry—the Pythagorean theorem. Transport to a time of aqueducts and public baths. Suffer death by hemlock with Socrates. Get a glimpse into the lives of Leucippus and Democritus, who postulated material is formed of atoms. Smell frankincense perfume and relieve pain with myrrh. This book of narrative non-fiction will appeal to readers who love an entertaining true story with relevance to today’s world.

How to Mellify a Corpse is the second book in a trilogy that will be completed in 2012. The first book, Working IX to V (2007), details the medley of professions in the ancient world, from orgy planner to funeral clown. The third book will be titled First You Take a Hippo’s Forehead. This is a reference to the initial step of an anti-aphrodisiac recipe (imagine that—in ancient times men were sometimes seen as too virile). The final book in the series will focus on biology and sexuality. This series will accomplish León’s goal to provide “a quirky look at how science and superstition were tangled together and about the people in ancient times who believed in both.”

When asked what words describe her best, León pondered for a few seconds before settling on “colorful.” A fitting description, as she was dressed in a lime green T-shirt off-set by florescent orange Crocs and fuzzy turquoise socks. She then elaborated by saying “I’ve led a vivid life; it feels like several lives.” León’s research and interests have taken her all over the world, initially as a travel writer and later as a historian. One of her goals is to “erase the label of history as dry and dusty … [because] history is as fascinating as any headline today.”

The title of this book is meant to pique readers’ curiosity. The name is a little weird, a bit grotesque, and somewhat of a “parody of the how-to books.” Its contents are sure to shock, inform, and entertain because León included “stuff for the science geek and non-geek.” She bravely pairs architecture and aqueducts that still stand today with primitive cataract surgery and embalming with honey all in one volume. Get the back story on some of history’s most famous philosophers, architects, and rulers. Why did Pythagoras hate fava beans so much? His extreme revulsion prompted him to warn his followers that “beans make women sterile … and they look like genitals. Or the gates of hell.”

Life today parallels history. Chemical and biological weapons were used in warfare long before any 20th century war. Cosmetics used to contain lethal substances; today some red lipsticks still test positive for lead. People share hopes and dreams that defy time and generation. This connection brings the characters of How to Mellify a Corpse to life in a poignant way. León says, “I want people to see how much like us they were. We haven’t evolved that much.” With the help of modern tools and understanding we should be able to make discoveries and conclusions of greater depth. Many discoveries from centuries ago can be used to enhance life now.

Modern science has proven the success of ancient techniques, from the embalming properties of honey to the herculean bonding power of concrete. Alexander the Great was mellified in honey and his mummy was preserved in remarkable condition for centuries. This preservation is possible because of the antibacterial properties of honey and its ability to produce hydrogen peroxide when exposed to human tissue. Coated in honey, a cadaver maintains good skin tone and human appearance. Today’s applications of this technology include storing skin grafts in honey and bandages that contain honey. Similarly, the concrete that the Romans used to construct such buildings as the Pantheon is a substance modern architectural engineers have studied and perfected. The hydrate lime and pozzolanic ash combine to make a super-strong concrete mortar that repels water, perfect for construction of modern dams.

If you have ever wondered why or how a practice or law began, this book is a place to find answers. And you can tote How to Mellify a Corpse to the beach. You’ll amaze friends with anecdotes of emperors and goddesses, and very likely you’ll bring home a jar of honey for the medicine cabinet!