Her fate was sealed by age 4. When grown-ups looked at the brightly colored pictures made by her particular pair of tiny hands, they liked what they saw.

“I knew from the get-go that I would be an artist,” Colleen Gnos said. “My paintings in preschool, the other moms would say that you could actually tell what mine were of.”

Now, several decades later, Gnos lives and works as an artist in Shell Beach. As she’s grown and matured, her art has too. In the teenage years, Gnos’ paintings had political undertones. When she was 21 and learned how to surf, her subject matter became the ocean and fantastical mermaids. Three years ago, when Gnos was diagnosed and treated for primary bone lymphoma cancer, she took on a new subject matter. Inspired by playing bass in the local band Fox and Rice, Gnos started painting jazz players.

“I’m really into jazz,” she said. “Every morning I listen to A Morning Cup of Jazz, so I started painting what I think the music looks like, and it started evolving from there.” 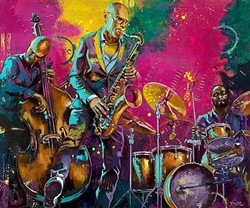 Gnos’ paintings that she’s worked on for the past year and a half feature her two most current artistic inspirations and will be the focus of her show, Musicians and Mermaids, currently on display at the Steynberg Gallery in San Luis Obispo. Gnos’ mermaids have mostly graced the walls at Kelsey See Canyon Vineyards (owned by her aunt and uncle) and their wine labels. But even prior to receiving treatment for cancer at age 38, Gnos didn’t necessarily hear the call of the ocean anymore when she took out her paintbrushes.

“I had lost a lot of my joy with painting before cancer,” Gnos said. “So after I was diagnosed, I started sculpting in between treatments and it was just so much joy. During cancer there was no pressure to sell paintings or make money. Taking that off the plate, I realized again how much I like painting, and then I was able to come back to the mermaids and really enjoy them.”

It was around this time that she stumbled across an old friend and a new muse: jazz music. Gnos’ paintings of musicians, like Spontaneous Groove, feature a bevy of bright colors and soulful looking musicians jamming. A musician friend took one look at Gnos’ newer paintings and was in awe of how much she captured that feeling of creating music. 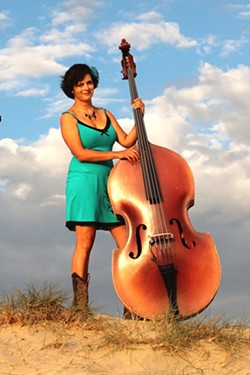 “He told me, ‘That’s what it’s like when the groove’s coming through you and you’re a part of the music,’”Gnos said.

Between jamming as the base player for local band Fox and Rice and painting full time for a career, Gnos stays busy. She’s currently booked through January working on projects like restoring a painting from the ’60s, painting a tattoo on a prosthetic leg, and beginning work to paint two lifeguard towers as part of a public art project for the Avila Beach Community Foundation.

In the fall, Gnos will celebrate three years of being cancer free.

“We move on; we take the lessons that we learn from it, and I did learn some really important lessons [from cancer] that helped me in my personal life, my family life, and my work as well.”

Ryah Cooley always wanted to be a mermaid at rcooley@newtimesslo.com.