The exhibit Type Design: A Journey features the work of Brooklyn based typeface designer Nina Stössinger and is on display at Cal Poly's University Art Gallery through Oct. 20. Visit artgallery.calpoly.edu for more information.

When it's done well, Nina Stössinger's line of work is something people take for granted, but it's the first thing the Swiss transplant notices when exploring a new city, as the different styles of words and signage pop out at her.

The Brooklyn-based typeface designer's work is currently on view in her first solo show, Type Design: A Journey, at Cal Poly's University Art Gallery and follows the evolution of her work, from her first published font family through her more recent work, including typeface design, sketches, and lettering.

While Stössinger is happy to be in her field, it wasn't always the destination.

"I didn't even know this was a thing people did," she said. "There aren't many places to learn about this."

Stössinger started out in web design and gradually became more interested in graphic design, which finally led her to the art of designing fonts. She studied typeface at Zurich University of the Arts and at the Royal Academy of Art in The Hague. She currently teaches type design at the Yale School of Art. 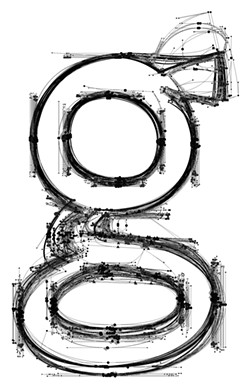 "It impacts most of us every day," Stössinger said. "It's a very niche and specialized thing."

Her work is a very practical thing since it needs to be readable, but there's also some creativity to be found in the process.

"You're designing a system of shapes that need to go together in any combination or language," Stössinger said. "I think of it as a more functional than aesthetic thing but they overlap."

Like any creator, Stössinger is hard pressed to choose a favorite among her projects, though she admitted to favoring a minimalist style (blame it on her Swiss heritage) and liking whatever font creation is the newest. Right now that's Nordvest, which translates in English as Northwest.

"It kind of turns some of the conventions of typeface on its head," Stössinger said. "I tried to see how far I could push the boundaries without being distracting."

While there are fonts everyone hates on, Stössinger firmly believes that there aren't really bad fonts, just bad font usage. Take the dreaded, overused Comic Sans for instance. It's everywhere on emails, family newsletters, and even PowerPoint presentations. But according to Stössinger, it was originally designed to be used as part of a playful, cartoonish interface for Microsoft for a character known as Microsoft Bob. That interface never quite came to life, and instead, Comic Sans was dropped into Word for public consumption. 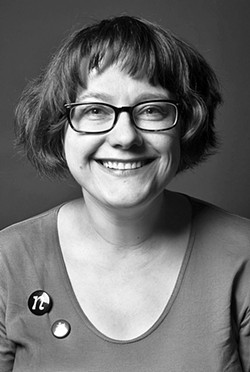 "People used it for everything, which didn't help the matter," Stössinger said. "I don't think it's a bad font. People just use it wrong."

A good font, on the other hand, can fly under the radar. Stössinger said these fonts usually have consistency, a quality that asserts itself, and no one feature gets so loud that it overpowers the others. After all, at its core, a font is supposed to enable written communication for things like books, music, and movies.

"I think the power of it is that most of us don't think about the font as something that we're reading, but it impacts the way we're reading it," Stössinger said. Δ

Arts Editor Ryah Cooley wrote this article in the Geneva font at rcooley@newtimesslo.com.