Paso Robles-based event producer Morgen Hoffman is gearing up for her second season of "one-of-a-kind dining experiences" that spotlight local chefs and vintners, as well as venues "that are unique, off the beaten path, and represent the Central Coast as a destination," she said.

"I look for locations that aren't normally accessible to the public for a seated dinner, thereby creating a very unique experience for our dinner guests." 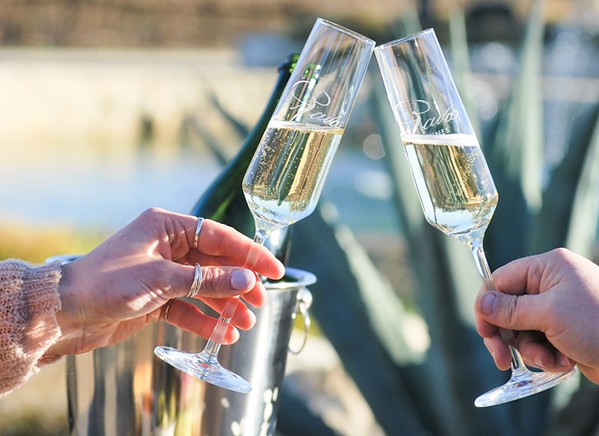 New to the Table & Vine Supper Club lineup is its first-ever brunch as well as expansion into Santa Barbara County.

Launched in 2021, Hoffman's culinary offerings run monthly from late spring to October. During the off-season between November and April, she focuses on her primary business, Morgen Hoffman Events, servicing corporate clients throughout the Los Angeles and Central Coast areas. 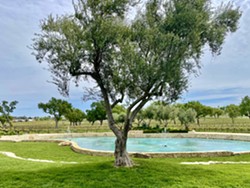 This year's supper series will kick off on May 29, with chefs Mateo Rogers and Brittney Yracheta—of Momotaro Ramen and Heirloom fame—teaming up with sparkling powerhouse Rava Wines and Events to produce a gourmet brunch experience at the Rava estate in Paso Robles.

The farm-to-table menu will start with passed bites at a welcome reception, followed by a four-course plated meal.

"Each course will be paired with the beautiful sparkling wines from Rava," according to Hoffman. Selected pours include bubbly standouts Lunare, grüner veltliner, grenache rosé, brut, and riesling.

The duo's cooking philosophy focuses "on local ingredients and framing the hard work of our local farmers," Rogers said. "I think we both lean toward really what is being utilized during its peak season in any style of cuisine."

They are also partial to Japanese cuisine, with their most recent venture—Momotaro Ramen—a perfect example. 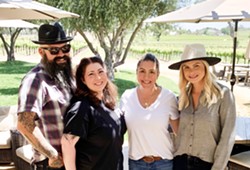 "The namesake hails from the story of Momotaro, which translates to Peach Boy," Rogers explained.

Rogers added that the menu at Momotaro is "executed with kokoro—meaning heart and soul."

Rogers and Yracheta pour their heart and soul into all their endeavors, including Heirloom Catering, which in 2019 transitioned to a brick-and-mortar in Templeton called Heirloom Kitchen and Eatery.

The establishment didn't survive the pandemic and shut down in 2021. However, Rogers added, he and Yracheta are never idle. They may "resurrect the concept at the request of many locals," he said, and have plans to open a bakery as well.

Yracheta, who received patisserie training at the now-closed Le Cordon Bleu in Pasadena, worked at Back Porch Bakery in Atascadero crafting artisan breads and classic French pastries prior to partnering with Rogers. 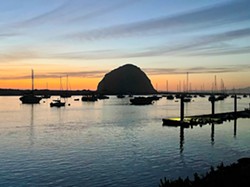 While helming the kitchen at Paso's The Hatch Rotisserie & Bar, Rogers met Yracheta, and they've been blazing a culinary trail together ever since.

Next up on the Table & Vine agenda is a partnership between chef Matthew Roberts and winemaker Jordan Fiorentini, with Morro Rock as the backdrop.

Fiorentini, meanwhile—voted SLO County Wine Industry's winemaker of the year for 2021—serves as vice president of winemaking and vineyards for Epoch Estate Wines in Paso. 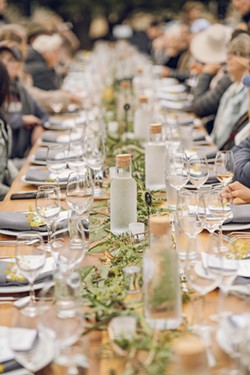 Epoch pours will include 2017 and 2021 vintages from the winery's award-winning Rhone-centric varieties. Guests will start with a mourvèdre-based rosé and grenache blanc-viognier blend, finishing with three syrah- and petite sirah-focused heavyweights.

The menu is still under development, but Tolosa winemaker Fred Delivert's artisanal single-vineyard pinot noir and chardonnay will likely grace the table.

"Nothing is ready to announce as of yet ... but we are all about highlighting and showcasing the Central Coast, so this encompasses many counties," Hoffman said. "We plan to grow and expand our dinners, collaborating with many different Central Coast chefs, vintners, and iconic/historic venues across California's Central Coast in the next year or two in order to bring more awareness and prestige to this amazing, growing culinary wine region that we call home." Δ