Taco Temple has more than gigantic tacos—it has gigantic slices of carrot cake, too

Get to the temple

Taco Temple is now open at 1575 Calle Joaquin in San Luis Obispo. There, you can have some tacos and eat your cake too.

The first thing Nicole DeWolf does when she gets to work at 5 a.m. is bake eight rounds of carrot cake, which will eventually become four cakes with seven huge slices apiece—each topped by a cute little walnut.

A massive bowl of cream cheese frosting sits on a gleaming metal countertop around 8 a.m., waiting to be spread between layers of cake cram-jammed with carrots and walnuts. There are no raisins in this dense delicacy, thank God. Those little dried up grapes have a tendency to ruin a perfectly good slice of cake. 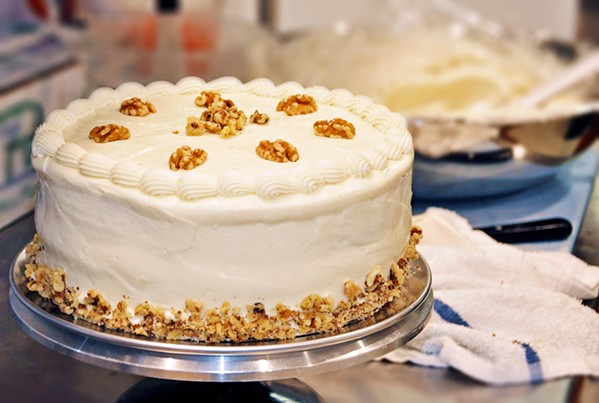 Although the kitchen at Taco Temple was empty, save for DeWolf and chef Peter Irwin, when I arrived at the spot that used to house Margie's Diner in SLO, it's now bustling. Cooks move in and out of the walk-in cooler next to the dessert station where DeWolf works. Tortillas get delivered. Irwin is pulling fish out, getting it ready for the day.

I know I should be here to talk tacos, but I'm not. Tacos are what this temple to overburdened shells is known for. Piled high with veggies, beautifully cooked fish, and the crunchiest mess of shoestring potatoes, tortillas struggle against the pile of food they're meant to keep together.

There's no skimping on taco fillings in this joint. This you know. Or you should know—and if you don't know, get your ass down to Taco Temple for a taste (you won't regret it).

I arrived at 7:30 a.m. for cake, not tacos. And I'm leaving with a heavy slice to have for breakfast with the rest of my coffee.

DeWolf's the pastry chef at the second Taco Temple location, which held its grand opening at the beginning of May in San Luis Obispo. 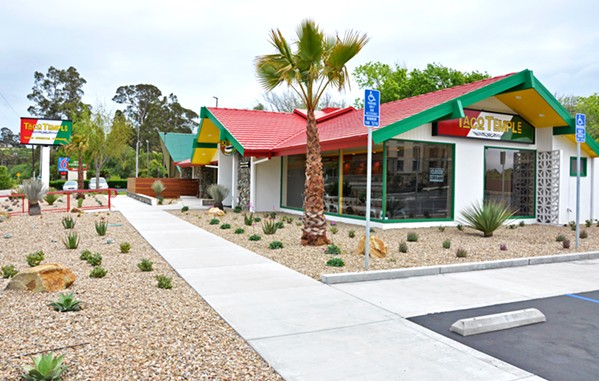 "Taco Temple has this crazy cult following," DeWolf says. "It's a beloved institution in Morro Bay, and I have a feeling that it's going to become that in San Luis as well."

Part of that cult status is apparently reserved for carrot cake. Since they've opened, DeWolf says restaurant patrons have gone through up to six cakes in a night (that's 42 slices of cake that are big enough for four people to share)—and that's just the carrot cake, mind you. She's also dishing up New York-style cheesecake, tres leches cake, chocolate bread pudding, and flan.

"I don't know if it will stay this way. It's wild," she says of how busy the restaurant has been since it opened.

Right now, though, the front of the house is deserted. We sit and chat in the dimly lit restaurant, which no longer looks like the Margie's Diner it once held. Green and blue subway tile shines behind the bar. Retro teal blue stools match the vintage industrial orange lights hanging above them. Red vinyl booths line the wall, and the tables seem to be endless. This place is big, but every time I've passed by it on the freeway, it's full—both the tables you can see from Highway 101 and the parking lot.

DeWolf counts herself as lucky. She says that she smiles to herself sometimes when she realizes that she is once again baking for a living. Her most recent job was at a little pharmacy in Morro Bay.

"I wasn't fulfilled in my previous job. The customers I loved—I loved the customer interaction—but I wasn't doing what I love," DeWolf says. "I kind of laugh that I found my way back to baking."

In 1996, DeWolf graduated from the California Culinary Academy in San Francisco with a baking and pastry arts certificate. The school helped her refine the skills that she already had, she says, because she spent a lot of time in the kitchen growing up. Basically, she was just attached to her mother's hip, she says.

"I really learned everything that I needed to know from my mom," she says.

That includes a lesson about what eats first. According to DeWolf's mom, it's the eyes. Her family often sat down to eat their meals, and those meals were always presented: plates, properly placed silverware, serving dishes, serving spoons. She remembers moving some of the serving utensils off the plates, and her mom telling her about why it's important for everything on the table to be in its proper place.

"You present food so it's beautiful because people eat with their eyes first," DeWolf says, adding that baking is her art form. "I was always frustrated because I couldn't draw or paint. ... My medium is butter and sugar instead of paint or, say, clay. ... This feeds my spirit."

In culinary school, baking wasn't on her agenda at first, DeWolf says. For six months, she was enrolled in the full chef program, where they put students through the paces in three different kitchens—including one that's called the "hot kitchen." As in, hot food and the hot seat. The frenetic energy surrounding her was almost too much, DeWolf says.

"They're yelling at you, 'Vegetables!', and I was like a deer in headlights," she says.

That's when she turned her eye toward the softer side of things with Peter Reinhart, the first baker to win a James Beard award. He taught on the baking and pastry arts side of the school.

"He really helped me," she says. "When he listened to what my issues were ... he said, 'It's not that you don't want to be in the kitchen; it just doesn't suit your personality.'"

That personality includes a desire to take care of people, something that she feels is baked into the desserts she pulls out of the oven.

She took her degree and started working for Sam's Club as a cake decorator. Within six months, she was the cafe and bakery manager. She left there when she had a baby and took a decade off from being in the industry.

Although she wasn't employed in her preferred craft, DeWolf continued to bake cakes for weddings, birthdays, and other special occasions—always expertly decorated, of course. It was her way of taking care of people and bringing both herself and them joy. Her carrot cake was a big hit, and that's a recipe she brought with her to Taco Temple.

It's moist and full of the veggie it's named for, covered in decadent cream cheese frosting and packed with walnuts. The cake is soft and inviting, something you can really tuck into and savor. Giving people that feeling of home is exactly why she bakes (she considers herself more of a baker than a pastry chef).

"A baker brings cozy to the table," she says. "Baking isn't about sadness; it's about happiness and pleasure." Δ

Editor Camillia Lanham believes that sugar is the spice of life. Send comments to clanham@newtimesslo.com.