Since California basically has only two seasons, spring is basically just summer. So time to break out those swimsuits, hit the beach, and get your seafood on. But for people who are a little lazier, and don’t want to drive the 15 minutes to Avila, have no fear, the answer has arrived, in the form of seafood tacos.

Spencer Makenzie’s opened March 16, at the former home of Fat Cats Café. Bright and clean, with teal walls and with the beach-y music of Jack Johnson and Colbie Caillat, the restaurant offers a mellow atmosphere with plenty of seafood items to make you feel like you’re at the beach without the hassle of getting in your car and driving over there. 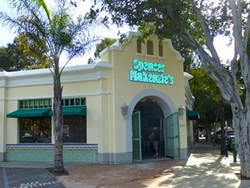 Owner John Karayan said he dreamed of opening up a seafood restaurant since he was 19. He started selling his food in a trailer in 2007, opening up stands at venues like the Ventura County Fair, The Aloha Festival, The C Street Long Board Classic, and the Coachella Valley Music and Arts Festival. During that time, Karayan traveled to and from Mexico to work on perfecting his ceviche, fish taco, and secret sauce recipes. Two years later, Karayan finally opened the first Spencer Makenzie’s Fish Company in downtown Ventura.

“I named the store after my kids,” Karayan said. “Spencer, who’s now 11, and Makenzie, who’s 9. We have two more kids now who are 4 and 2, and we named some things in the restaurant after them. We’ve got our special Brooklyn sauce, and the Parker burger. So this is very much a family business.”

Since then, the restaurant was voted the Best Fish Taco by the Ventura County Reporter, and the Best Seafood Burrito by the website fivethirtyeight.com. In addition, the Ventura restaurant boasts the largest corn hole competition on the West Coast, The Throw Down. For those who are not familiar with corn hole, it’s basically a lawn game where people throw bags of corn or beanbags at a raised platform, and try to make it in the uppermost hole.

“It started out as just a block party with local bands and music,” Karayan said. “And then it just grew into this beast, and now it’s one of the largest in the nation. We’re going to try and see if we can bring it to San Luis Obispo. Next year we’re going to test it out, maybe hold the qualifiers in town, and see how it goes.”

“I mean who wouldn’t want to go to San Luis Obispo?” Karayan said. “We wanted to open up a restaurant here because we loved the area, and it really fit our concept. We wanted to create a healthy, fast food kind of restaurant, and here a lot of people like eating healthy. We wanted to have a place that offered quality food for a moderate price.”

Additionally, Spencer Makenzie’s will be offering happy hours from Monday to Thursday, with two-for-one giant tacos from 3 to 5 p.m., and Taco Tuesdays, with hard shell tacos for $1.50, and a discount on draft beers during happy hour, from 4 to 6 p.m.

All of the food at Spencer Makenzie’s is primarily homemade, using fresh ingredients provided by Jordano’s Foodservice, located in Santa Barbara.

All of the cooking oil used is turned into biodiesel fuel for vehicles, and the plates, cups, and utensils are all biodegradable and compostable.

Spencer Makenzie’s is located at 1058 Higuera St. For more information about the menu or happy hour prices, go to spencermakenzies.com, or call 544-8226.

SLO Safe Ride will be offering a discount on its nightlife rides to celebrate the upcoming release of its new phone app, which will be available for iPhones and Androids. For the entire month of March, nightlife rides are $3 per person, with a $9 minimum on Fridays and Saturdays. The VIP Wristband is available for groups of six or more, and offers deals like no cover charges, drink deals, and discounts at more than 20 businesses throughout the week. For more information, call 620-7233, or visit slosaferide.com.