Take a shine to Moonshiner

What does it mean to let go? Does it mean throwing off the shackles of the rat race and disappearing into nature? Embracing your dream? Surrendering to love?

For Moonshiner (aka Dan Curcio, formerly of Still Time), it means all these things and more. His new album, released Friday, May 24, at SLO Brew (doors at 7:30 p.m.; 21-and-older; $12 presale or $15 at the door), features 14 tracks—“Each a different variation of the theme of letting go,” Dan says over a beer on a recent sunny afternoon.

Titled Let Go, the title track sets the tone: I knew the faster I fell well the quicker the fate/ I chose to float on this sunny and endless day/ She whispered softly says “hey there how do you feel”/ Well the river’s running high/ and it’s taking me through something unreal/ Oh love there’s a smile that I find every morning/ When I wake from the depths of this dream/ Oh love when I see you I believe/ Everything will always be how we’ve asked it to be/ And all we have is time/ Let’s drift again/ Some river where/ We both let go.

Beautiful, emotive, and picturesque language fills this new album, and Dan’s voice has the same infectious charm as Ben Harper, Jack Johnson, or Eddie Vedder. Best of all, the songs on this new album will hook you on the first listen. My favorite is “Autumness,” a song that sounds like it should be blasting out of a convertible driving up Highway 1. The chorus will blow you away!

Dan got his start with Cal Poly dorm buddies to form Longview, which became the New Longview, and eventually Still Time. The band did a couple of national tours in a ramshackle RV, and as good as they were, they never quite hit. Dan knew if he was going to make this music thing work as a full time gig, he’d need to pare down, so he’s hooked up with 23-year-old wunderkind Nathan Towne, a multi-instrumentalist whose talents Dan describes as “unreal.”

Nathan plays drums, bass, piano, guitar, banjo, and ukulele, and he uses looping technology to create a one-man band sound. When they perform live as a duo, Nathan might start by laying down a drum beat that gets recorded and played in a loop. They add a bass line, also recorded and looped, before going to a third instrument. He can control the various loops with his foot, starting and stopping and layering them. If you’ve ever seen Keller Williams, you know what I’m talking about. During the SLO Brew show, there will also be a projected video that goes with the music.

“This stuff can come off as gimmicky,” Dan admits, sipping his beer, “but Nathan’s so good at it!”

Does he mind playing second fiddle to Dan as front man?

“To be honest, I think he prefers it,” Dan says. “He’s extremely talented and could do lot of things, but for now, he’s happy working with me. I’m still trying to figure out the branding, but I want to be clear that Moonshiner is me and includes a rotating group of musicians. Right now that’s Nathan.”

Currently Dan and his wife Stephanie—his manager—are working on building an Internet presence. They’ve booked a couple of shows after the SLO Brew album release party, and Dan says, “Ideally we’ll be doing a national tour within the year. When I was with Still Time, life on the road with six guys could be challenging.”

Dan plans to tour with his wife and Nathan—keep it small. But if the quality of this new album is any indication, Moonshiner won’t be small for long.

“I think that in this life it’s often easy to get caught up with our end goals and the destination when it is really all about the journey,” Dan says. “We have a tendency to say ‘when I get this car I’ll be able to do this’ or ‘when I get promoted I can do that’—an intense focus on some unknown future that’s supposed to magically allow you to reach some sort of greater purpose or enlightenment. For me personally, my end goal is success in my music career. For a long while, I’d been driving myself crazy with the delusion that I’d be fulfilled and at peace if I get to the point of playing to 5,000-plus people each show or selling 100,000-plus downloads every month—these arbitrary goals based on a skewed view of success. It’s much easier said than done, but I think when we truly appreciate and embrace the journey of getting there, we find that the goal is often secondary and the fulfillment and true happiness are often found right in front of our faces. Let Go is deeply inspired by this sentiment, and each song reflects a different aspect of what it means to be in tune with the journey.”

Strange Vine and Jayson Jones will open the Moonshiner show. And while we’re on the topic of SLO Brew, which is due to begin construction on its new location in a few weeks, here’s what else they have cooking for the week: British blues icon John Mayall plays Thursday, May 23 (doors at 7 p.m.; 21-and-older; $23 presale or $25 at the door), with the Dani Page Band opening. Mayall’s almost 80 years old, but he’s still got the juice!

Murder By Death returns on Monday, May 27 (doors at 8 p.m.; all ages; $12 presale or $15 at the door), with The Mutineers opening. Murder By Death plays a cool mix of Americana roots noir with a post punk energy.

Man, it’s good to see Micky Rae touring with the Cadillac Angels again! For a while, she only played with them when they were near her home in Arizona, but she’s back and ready to hop on a bar with her upright bass or ride that thing like a surfboard while slapping away to front man Tony Balbinot’s highly charged roots rock.

The Cadillac Angels return to SLO Town on Thursday, May 23, with an album release party at Frog and Peach.

“Well, here it is, CD No. 18 or 19? I’ve lost count!” Tony said. “This is the first CD where I just wrote songs as they came to me without thinking about whether or not they were rockabilly or roots or whatever. I think a project like this was way overdue for me. So far the reviews have been favorable.”

A lot of the songs sound like they could have come out of the head of Chris Isaak.

“Come to Me” is another slow burner, but I think my favorite track is the walking blues song “Her Country”: The way I used to live, well, I can’t live that way no more. Going back to the country, gonna knock on my baby’s door.

“I remember my very first CD release party was in SLO at Mother’s Tavern some 15 or 16 years ago?” Tony recalled. “Tom Hewitt recorded and produced it, and it was the last live show he attended before crossing over to the other side. He made it possible for me to continue to make records because he recorded us for free—a rare thing back in those days—and I’ve just turned the money from that first CD Feel Like Rockin’ over and over for each new project. I think Tom would have liked that.”

I think he would indeed. Keep on rockin’, Angels! 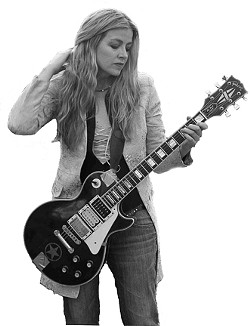 Americana and country singer and composer John Prine is a true music icon, a guy who landed in Chicago after a tour in the Army and became a postman who did the singer-songwriter thing at night. Roger Ebert wrote the very first review of Prine, calling him a great songwriter, and Kris Kristofferson is credited with “discovering” him, and is rumored to have remarked that Prine’s songs were so good “we’ll have to break his thumbs.”

Known for his deadpan humor and remarkable songs such as “Hello in There,” “Sam Stone,” “Angel from Montgomery,” “Illegal Smile,” and “Dear Abby,” he’s a one-of-a-kind performer and Grammy Award winner who does things his own way. In fact, in 2009, Bob Dylan told the Huffington Post that Prine was one of his faves, stating, “Prine’s stuff is pure Proustian existentialism.” Prine’s songs have been covered by dozens of other artists, including Johnny Cash, Bonnie Raitt, the Everly Brothers, John Denver, Kris Kristofferson, Carly Simon, Ben Harper, and Joan Baez.

On Friday, May 24, Cal Poly Arts and Otter Productions, Inc. present John Prine in concert at 8 p.m. in the Performing Arts Center (tickets cost $32 to $70; call 756-4849). Special guest Holly Williams will open the show. She’s the granddaughter of Hank Williams, daughter of Hank Jr., and half-sister of Hank III, and she’s got a great new album out, The Highway, on which she explores universal themes like love, loss, conflict, family, and desire. This should be a helluva show.

Blues at the beach!

This year marks the 20th anniversary of one of the most beloved annual concerts SLO County has ever seen! I’m talking about the Avila Beach Blues Festival, which boasts a smoking lineup this year, including The Steve Miller Band, The Elvin Bishop Band, and Carolyn Wonderland playing Sunday, May 26, at Avila Beach Resort (gates at noon; show at 2 p.m.; tickets available at all Vallitix outlets).

If you’ve never been, take it from me, it’s a great way to spend the afternoon. You can get general admission tickets and bring a blanket or low-back chair or buy reserved theater-style and table seating, and there are specialty drinks and premium beer and wine for sale, as well as plenty of delicious snacks. (No outside food and beverages! No pets!)

Hear live versions of “The Joker,” “Take the Money and Run,” “Fly Like an Eagle,” “Abracadabra,” and more Steve Miller hits! Get blown away by the ripping guitar work of Elvin Bishop and Carolyn Wonderland! Get a suntan!

The Cliffnotes, featuring Valerie Johnson and Al B Blue, are bringing their brand of blues, classic rock, and frivolity to the Shell Café in Pismo Beach on Saturday, May 25, at 7 p.m.

The 30th Annual Arroyo Grande Strawberry Festival happens Saturday and Sunday, May 25 and 26, and boasts more than 300 booths, three carnival areas, camel rides, and street performers that attract thousands of visitors to this free event! You’ll find 11 stages throughout the old town village playing a wide variety of music. The Shival Experience, the Crisptones, The Usual Suspects, the RKdians, Highway 1, the Moon Pie Band, and Bubba Ramey are a few of the performers, but there are too many to list! Visit arroyograndevillage.org/strawberry_fest for a complete schedule of events.

On Sunday, May 26, Twang N Bang Records is releasing its second compilation album, For All Mankind, coinciding with a Frog and Peach concert at 5 p.m. featuring Magazine Dirty, American Dirt, 50 Watt Heavy (from Sacramento), Matt Woods (of Knoxville, Tenn.), Dead Volts, St. James Infirmary, King Walrus & the Magicians, and Colin Prins (of Readum & Weepers). “Building on the success of last year’s compilation The Cause & the Cure, this year we continue to highlight SLO-based bands as well as spotlighting some touring acts that have become fixtures on the local scene,” said label head Patrick Hayes. “Exclusive tracks as well as preview tracks from forthcoming albums make this a unique collection of tunes that you can’t get anywhere else.”

Fresh off the release of their first EP It’s All in the Cheese, reggae-rock newcomers Na’an Stop play Frog and Peach on Monday, May 27. The Boulder, Colo., band is currently on a nine-city West Coast tour.