Virtuosic musicianship, neoclassical compositional structures, and three-part vocal harmonies have been the earmark of YES since their formation in London way back in 1968. They’re arguably the most successful progressive rock band of all time, but over their long career, keeping track of their various personnel changes has been a Byzantine undertaking. This much I know: When YES plays the Vina Robles Amphitheatre 8 p.m. on Saturday, July 6, Steve Howe, Geoff Downes, Jon Davison, Alan White, and co-founder Chris Squire will be on stage.

Squire (bass; vox) has been with the band since the beginning; Steve Howe (guitars) joined up in 1971; White (drums) joined in 1972; Downes (keyboards; vox) came on board in 1980; and lead singer Davison joined in 2012. Other notable members over the years include co-founder Jon Anderson, Rick Wakeman, and Bill Bruford, but there’ve been about 10 other members. 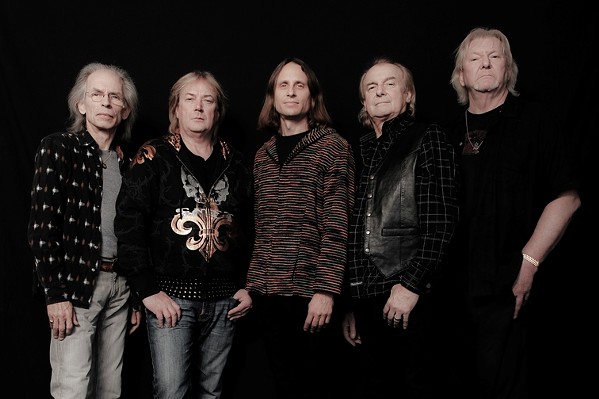 For fans, this should be a must-see concert, especially since the sound in the Vina Robles Amphitheatre is superb! And there’s not a bad seat in the house. And for those disappointed that Jon Anderson isn’t touring with the band, rest assured that Jon Davison is a worthy replacement.

Visit vinaroblesamphitheatre.com for tickets. And while we’re on the Vina Robles subject, their next show features Bruce Hornsby and the Noisemakers and opening act Railroad Earth on Tuesday, July 9 at 8 p.m.

Singer and pianist Bruce Hornsby played for years in the background with other artists before forming the Range and breaking out in 1986 with “The Way It Is,” a No. 1 pop single with a powerful antiracism message. Other hits include “Mandolin Rain,” “Every Little Kiss,” “The Valley Road,” “Look Out Any Window,” “Across the River,” “Field of Gray,” and “Walk in the Sun.”

According to their publicist, “Railroad Earth sings of our nation’s changing landscape and social ills with a commitment reminiscent of Woody Guthrie, while interpolating instrumental timbres that could have been pulled from Celtic or Cajun culture.”

Get your 4th started right! The Arroyo Grande Village Summer Concert Series continues on Thursday, July 4, with spirited concert band music from ever-popular Village Band. Head to the Rotary Bandstand in the Village of Arroyo Grande at 1 p.m. to kick off your day with two sets of patriotic music. The South County Historical Society will set the mood with traditional red, white, and blue decorations, period costumes, and barbecue. 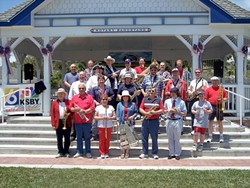 According to the band, Human Nation is “heading toward completion of the long-awaited CD, Migration! The final tweaks are being put into the mixes, we have completed artwork, logo and other graphics in place, legal details have been handled, and we’re doing the final layout for the CD cover/liner/backside. Without giving a firm date, we will have something in your hands by the end of this summer! This baby’s almost here.” In the meantime, get your Human Nation fix at Concerts in the Park in Paso Robles on Friday, July 5, from 5:30 to 7:30 p.m. in the City Park bandstand.

Bay Area jam band veteran Scott Cooper celebrates his new CD Jack of All Trades with three local shows. This new release focuses on Scott’s acoustic side with healthy portions of bluegrass, classic country, and Americana. See him Friday, July 5, from 9 p.m. to midnight in Pappy McGregor’s; Saturday, July 6, from 1 to 4 p.m. in Peachy Canyon Winery; and Saturday, July 6, from 5 to 9 p.m. in Fin’s.

Songwriter Annie Moscow has seen her music covered by Sarah Vaughn, Sister Sledge, and Mickey Mouse, and on Saturday, July 6 (1 p.m.; all ages; free), Moscow will perform her material herself when she plays Vines on the Marycrest with special guests Steve Kindel, George Nauful, and Steve Key. Moscow’s writing career began in 1986 when her song “Tears in My Heart” was recorded in Japan by Hiromi Asai, and also performed by jazz legend Sarah Vaughn in her final New York appearance. Her most recent album, Phoenix, named her current residence. 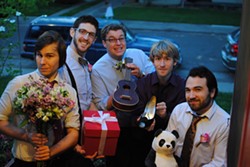 You can get a heapin’ helpin’ of hot jazz on Saturday, July 6, at the Red Barn Community Music Series when Sacramento-based act The World’s Finest Apples plays with opening act Molly Reeves of Red Skunk (5 p.m. potluck followed by a 6 p.m. show; $10 at the door). The World’s Finest Apples “serve up high-brow hot jazz on a low-brow paper plate,” according to press materials. “The first seeds of The Apples were planted in the minds of guitarist Nahum Zdybel and accordionist Keith Penney. In 2007 they undertook the experiment of busking across the United States, performing on the streets of more than 30 cities in 20 different states and living mostly out of Keith’s 2001 Chevy Lumina. After taking the act across the cobblestone streets of Europe in 2009, the duo returned stateside and joined forces with their long-time friend, drummer Pete Agraan. But to really bring the swing they needed a bassist, and after a Republican filibuster of the first choice, Kellen Garcia was promptly confirmed due to his bipartisan appeal and ideological stance on nondiatonic chromaticism. Thus was conceived The World’s Finest Apples.” Sounds like it’s going to be a real humdinger. 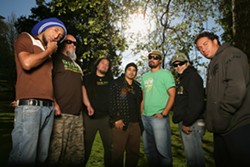 Otter Productions, Inc. and Collective Efforts Events are about to drop the bomb on Avila Beach when electronic dance music legends Above and Beyond play the third annual Avila Beach Party on Saturday, July 6 (gates open at 5 p.m.). Above & Beyond has a wildly enthusiastic fan base, the sort of rabid fans who sing their lyrics back at them in concert. Millions tune in for their weekly radio show Group Therapy. Featuring Jono Grant, Tony McGuinness, and Paavo Siljamaki, this 11-year-old trio is the only dance act in history to win the Essential Mix of the Year twice (for both their 2004 and 2011 efforts). General admission tickets ($40 plus a charitable donation and ticket handling fee) are available at avilabeachparty.eventbrite.com.

SLO Brew is taking it slow this week with just one show, reggae favorites Katchafire on Saturday, July 6 (doors at 7 p.m.; all ages; $20 presale or $22 at the door). The New Zealand band is comprised of indigenous Maori members. “A family affair from day one in 1997, founder and lead guitarist Grenville Bell and sons Logan (lead vocals) and Jordan (drums) remain the core of the band,” according to the band’s bio. “Transcending their origins in a Hamilton garage as a cover band, Katchafire took their Marley-inspired original music to the bars and clubs, building up a fan base of thousands. Their exceptional debut album, the prophetically named Revival, sold in excess of 45,000 copies (more than double platinum in New Zealand), and they scored massive hits with songs like ‘Giddy Up,’ the nation’s biggest selling single of 2002-3.”

Nate Currin is on a 60-date summer tour in support of his new aptly titled album The Pilgrim, and one of those 60 days—Saturday, July 6, to be exact—happens at Linnaea’s Café (8 p.m.; all ages; free). The Pilgrim, Currin’s sophomore album, “is unlike anything Currin has ever put out into the world, and far from most albums on the singer-songwriter, folk, and pop rock charts,” according to his press release. “It is an 18-song concept album centered around one of the most significant works of English literature, The Pilgrim’s Progress, written in 1678 by English writer and preacher John Bunyan, and presently translated into more than 200 languages.” He says it’s not a religious album, “Rather, it is his lyrical and musical interpretation of a piece of literature that has been referenced by many influential authors including Charles Dickens, Mark Twain, E.E. Cummings, Louisa May Alcott, and C.S. Lewis.”

On Sunday, July 7, pianist Joe Bagg plays a solo piano recital for the next Famous Jazz Artists Series concert at the D’Anbino wine tasting room. L.A. Times jazz critic Don Heckman has called Bagg “the West Coast’s favorite jazz piano accompanist.” Series co-producers Charlie and Sandi Shoemake will join in. There are 4 and 7:15 p.m. shows for $15 each, or pay $20 and see both. Call 927-0567 for reservations.

Ryan David Orr plays Linnaea’s Café Sunday, July 7, at 8 p.m. “I’ve been writing and performing original music since I was about 14 years old, after being involved in musical productions such as the opera Tosca, performed at the Angus Bowmer Theatre in Ashland, Ore., and in the [inaugural] Northwest Children’s Honor Choir, which performed at the Hult Center for the Performing Arts in Eugene, Ore. I’ve played as a solo act and with bands all across the U.S. Inspirations are vast, including artists like Radiohead, Mos Def, Tool, Counting Crows, PJ Harvey, Thelonius Monk, Modest Mouse, Pearl Jam, and Tori Amos. I write and produce many genres of music, but consistently return to the rootsy side of things, folk and indie rock being my major passions.” Check him out.

Nathan Fox is also playing on Thursday, July 11, at Frog and Peach (6:30 p.m.; 21-and-older; free). You can hear his music at nathanfoxmusic.com. His new EP, I’m All Done, kicks off with the Tin Pan Alley-sounding title track, moves into R&B with “Dr. Marten,” shifts to country-esque on “Losing Hope,” goes Dixieland on “Cutie Pie,” moves to pop on “I Can’t Hang,” and finishes with alt-rocker “Devil & The Hourglass.” These are tracks filled with horns and strings, really well produced and with a lot of textures. Good stuff!

Remember that tickets are still on sale for the upcoming Seven Sisters Fest on Friday and Saturday, July 12 and 13, at El Chorro Regional Park & Campground. The motto is “Celebrating Life on the Central Coast,” and the event is hosted by Tap It Brewing Company and produced by HarvestMoon Inc. with benefactors The Infinite Music Foundation, SLO Botanical Garden, The SLO Brewers Guild, Guitars in the Classroom, and the CA Craft Brewers Association. People can buy day tickets or camp overnight, and the organizers have purposely put together a very eclectic lineup of performers: Karl Denson’s Tiny Universe, Robben Ford, Gangstagrass, Nora Jane Struthers & The Party Line, Sister Sparrow & The Dirty Birds, Honey Island Swamp Band, Poor Man’s Poison, and City Folk. Tickets are available through all Vallitix locations, online at vallitix.com, or by phoning 1-888-825-5484. You can learn more at sevensistersfest.com.