Take a trip to the Netherlands 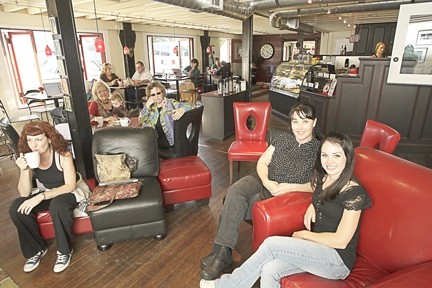 Rosemary and Stephanie Bourgault have advice for coffee snobs who live in the North County: If you can’t find a decent shot of espresso in an environment that is both cool and inviting, simply open your own café. That’s what the mother-daughter duo did last May when they opened Amsterdam.

“We were actually waiting for somebody else to do it,” said Rosemary of the pair’s dream café. But when the space, 725 13th Street in Paso Robles, became available last spring they decided to move forward with their vision. Their goal was to open in a mere six weeks, just in time for the wine festival in May.

Stephanie has a background in coffee, having worked as a barista at several cafes. She wanted to produce a high standard of beverage that would act as a draw for other coffee snobs. Toward that end, the café uses only fair-trade and organic beans, roasted by Coastal Peaks in San Luis Obispo. The rich and varied coffee flavors are complemented by freshly made panini (sandwiches), muffins, cinnamon rolls, cupcakes, and scones. Amsterdam also carries organic loose-leaf teas.

The atmosphere is the perfect balance between sleek and fun, an unlikely fusion of elegance and rockabilly charm. The design reflects the family’s personal tastes—hardwood floors, an assortment of black and red chairs, and a vibrant menu board decorated with sparrows and koi. A logo at the entrance features roses, an anchor, and a scroll. The café’s name actually originated with the logo. While taking a graphic design class at Cuesta College last October, Stephanie had to design a logo for a potential business. She came up with the name Amsterdam, which stuck with her.

Rosemary’s husband constructed Amsterdam’s cabinets and signs, and Stephanie created the designs that would be placed on them. Her newborn daughter was present throughout the process, the youngest generation to have a hand in the effort. So far, everything has fallen into place—including the throng of regulars who bustle into the café for their morning espresso.

Of course, Rosemary and Stephanie have ambitions for Amsterdam. In particular, they’d like to expand their nighttime hours. Currently, the café is open from 6 a.m. to 7 p.m. on weekdays, 7 a.m. to 7 p.m. on Saturdays, and 7 a.m. to 4 p.m. on Sundays. Paso Robles isn’t quite ready for a late-night café, Stephanie laments, but the transition should happen eventually. They’d also like to feature live entertainment and expand retail merchandise to sweatshirts, coffee mugs, and the like.

The Exploration Station, located at 867 Ramona Ave. in Grover Beach, is welcoming the public to unload unwanted electronic equipment at their facility. Computers, televisions, and monitors are among the items the station is accepting, though microwaves and other appliances are not. Donations are tax-deductible and the proceeds fund the station’s children’s programs. For more information call 473-1421.

Oddfellows is hosting a Halloween X-Ball on Oct. 31 from 7 p.m. to midnight. The Bootleggers will be providing live music. Tickets cost $22.50 if purchased before the event, and $25 at the door, and are available at Boo Boo Records and Costume Capers. The event is a fundraiser for various Oddfellows charities. Attendees must be 21 and older.

Heaven Can Wait, a nonprofit equine rescue and sanctuary, is hosting Cody’s Black and White Ball on Oct. 24 at La Bellasera Hotel and Suites, 206 Alexa Court in Paso Robles. The fundraiser will feature dinner, wine, dancing, and a silent auction. The dress code for the event is cowboy formal or evening attire. Tickets cost $90, or $600 for a table of 8. To purchase tickets call 712-3109 or 368-5702 …

Lifewater International, a local nonprofit that develops safe water systems in developing countries, will sponsor a skydiving trip to raise funds and awareness about the global water and sanitation crisis, which the World Health Organization estimates claims the lives of more than 6,000 children each day. The Water Fall will take place on Oct. 24. For every tandem skydiver who signs up, Lifewater claims it can provide safe drinking water to five children in East Africa. For more information, call 541-6634 or visit lifewater.org.