Take a tumble off the Christmas wagon

New Times recently obtained exclusive interviews with three holiday figures including the ghost of Christmas present from Charles Dickens’ A Christmas Carol, Santa Claus, and the Rat King from The Nutcracker. We proceeded to ask the tough questions, receiving candid assessments of the health risks posed by Santa’s shaking belly and the Rat King’s uncensored opinion about the Sugar Plum Fairy.

NEW TIMES I’ve heard conflicting reports; are you a ghost or spirit?

GHOST I am a ghost of Christmas present.

NEW TIMES Your physical similarities to Father Christmas have been noted; is he a relation?

GHOST There are some similarities between the Ghost of Christmas Present and Father Christmas or Saint Nicholas or Kris Kringle or Santa Claus. I think the difference between Father Christmas and myself is just the presence. I come once a year. I get one chance. Whereas Father Christmas keeps returning every year.

NEW TIMES That must put an enormous amount of job pressure on you if you’ve just one opportunity to get it right.

GHOST If I’m here to spread goodwill and cheer, it isn’t about getting it right. There are some who use my name and they claim to know me but commit deeds of passion, pride, selfishness, hatred in my name. But they are as strange to me as if they had never lived. For you should know, I am truly present, not in shouting words but in the humming of a Christmas tune or the gentle thoughts that carry a homeward hope.

NEW TIMES Obviously, your most famous work was your transformation of Ebenezer Scrooge; are you allowed to name some of your other projects? Dick Cheney, perhaps?

GHOST Well, there is some confidentiality in any sort of job market, confidentiality between you and your subject. I’m not at liberty to say. Scrooge’s case is pretty well documented. That one’s somewhat public domain. But others I would rather not talk about.

NEW TIMES Do you always work as a trio with the two other spirits, or do you ever branch out on your own?

GHOST I don’t know that it is this great triumvirate that goes around saving whoever needs saving. I would think that it was based on the individual. I believe Scrooge has a very bad case and he needs as much help as he can get realizing that humbug isn’t a Christmas word.

NEW TIMES Of the three ghosts, you’re traditionally depicted as the jolliest—the fellow with whom you wouldn’t mind getting a beer. Are you just playing the good cop in a good cop/ bad cop scenario? 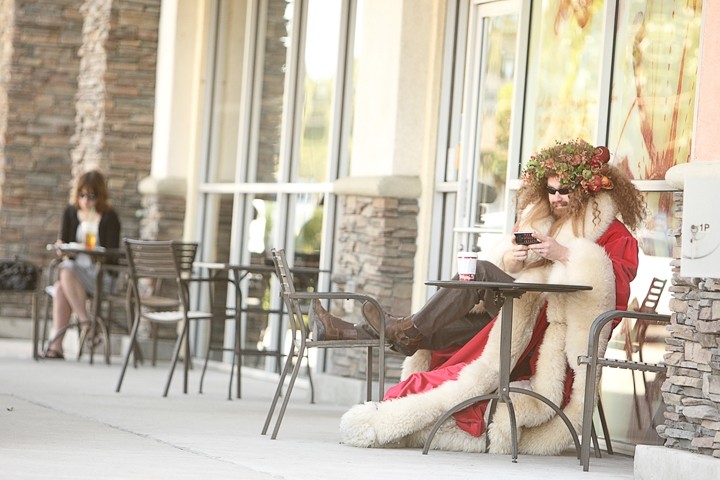 GHOST Well, I prefer the milk of human kindness. When you say nice ghost, yes, I’m very kind. However, I’ve also been compared to the Roman god Janus who is this two-faced god. There are times when my generosity will still be there but takes a turn for a more poignant point of view. When I find Scrooge or anyone, for that matter, who does not believe in Christmas, the point needs to get across.

NEW TIMES You first achieved fame in 1843; how do you avoid becoming dated in a youth-driven society? Lipo? A childlike spirit?

GHOST Well, I don’t embody present. I am present. But I see where you’re coming from in this day and age of new technologies and certain nouns that are verbs, like Google and MySpace and all of these things. I think even in these instances of technology we still put forth an effort to be kind to one another at this time of year. We must. I believe it is in our nature. Well, in your nature, as human beings. It is a time to come together and love one another and rejoice. I think, regardless of technology, of what the mass media may have led you to believe, the spirit of Christmas will always be there in the hearts and minds of those who love one another and believe in the spirit of Christmas.

NEW TIMES Did you and Scrooge keep in touch? Did he ever fall off the Christmas wagon?

GHOST I believe he got the message that I was sent to relay to him. And after that, my life on this globe is very brief. It ends in a night and there’s never enough time to say or do all the things we would wish. The thing to do is to do as much as you can in the time you have left. Remember, life is short and suddenly you are not there anymore…I leave that to chance and fate and to Scrooge to make the correct decisions.

NEW TIMES When the reindeer are out of commission, what’s your favorite mode of transportation?

SANTA I take the Polar Express.

NEW TIMES What are the wage laws at the North Pole? Do the elves have a union? Have you ever experienced an elf strike?

SANTA It’s a union job. I don’t negotiate that. They’re in it for the love of it, you know? None of these elves would ever do that. They love the children too much.

NEW TIMES Given your popularity, have you ever considered running for political office?

SANTA Oh no, that would take away too much energy from what I do.

NEW TIMES Is the economic downturn affecting things at the North Pole?

SANTA We always go at maximum speed. We all always have enough to give. No matter who you are you can always help someone. If everybody just helped one or two other people it would be the greatest planet to live on in the whole universe. That’s part of the spirit. The spirit goes beyond Santa Claus or Christmas or the holidays.

NEW TIMES Has your doctor ever sat you down to have a discussion about cookies and jolly bellies?

NEW TIMES Any famous celebrities or people we would know on your naughty list this year?

SANTA The clerical work of the list is done by the elves. I just follow the list. The elves, there are so many of them and they have so many eyes and they can see so many things that they take care of that for me. They load the sleigh for me.

NEW TIMES Where do you vacation? Do you have a problem with people recognizing you?

SANTA I just was down in Chile about eight months ago and by golly, they were screaming my name out from the side of the road when they saw me in the car. They said, “Papa Noel! Papa Noel!” And the same thing happened in France when I was over there last year. They recognized me even when I was in my vacation clothes. Same thing happened when I was in Italy. It’s unbelievable. The nice thing about my life on the North Pole is I get to go on vacation any time I want. I get to visit people all over the world all through the year. I have such a valuable, devoted crew that takes care of things and I could just spread joy. What more could I ask for? Last February we went to Antarctica…opportunities for travel are immense. I have to travel a lot to check out things during the daylight. Because doing things at night, some of the landings are tough. It’s a good thing the reindeer are smart.

NEW TIMES How on earth did you come up with coal as a punishment for naughty children? Do you have anything else you give to those on your naughty list?

SANTA That’s a regional thing. The tradition started in the U.S. when coal was very available. Becoming as green as we are now, I don’t know what that’s going to become but the elves will help me out.

NEW TIMES So, they’re in the process of identifying an alternative to coal?

SANTA That’s right. I’m sure they will because coal is definitely losing its popularity in this country.

NEW TIMES Do you have a special currency system at the North Pole, or do you embrace another system, like the euro?

SANTA Those transactions, again, are handled by the elves and they can convert anything into anything. They are so brilliant.

NEW TIMES How do you keep the twinkle in your eye?

SANTA Some things are genetic. It’s there and it’s there all the time.

NEW TIMES What kinds of presents did Jesus ask for as a boy?

SANTA It was a long time ago; I really don’t remember. I’m sure it must have been peace on earth.

NEW TIMES Are you at all concerned about how global warming might affect the North Pole, given that you’re pretty much surrounded by a sea of ice?

NEW TIMES How did you come to power? Is there some kind of electoral process?

RAT KING I was just the meanest one around and that darned Nutcracker, he’s just a thorn in my side and my goal is to defeat him so I just took over and nobody argued against me.

NEW TIMES So that was your platform, defeating the Nutcracker?

RAT KING Exactly. I have my followers and I try to get that guy every year.

NEW TIMES What do you, personally, have against the Nutcracker?

RAT KING He’s loved. You know, that little girl Clara just worships that guy. And what’s wrong with a rat, you know? We have a bad rap. Rats are considered dirty, nasty little animals. The Nutcracker, he’s not cute. Why do people love him? I can’t stand it!

NEW TIMES So you would attribute your antipathy towards the Nutcracker Prince to social prejudice?

RAT KING Well, yeah. I mean, there’s nothing wrong with a rat.

NEW TIMES Is your army entirely comprised of rats, or are there mice as well? How do the two get along?

RAT KING There’re mice. They do what I say. They get along great. The mice aren’t as strong-willed as the rats. And my wife, the queen, is a rat. But we have our entourage of warrior mice.

NEW TIMES Do you go by any title or name besides the rat king?

NEW TIMES Now that Clara and her prince have defeated you, what’s next? Do you plan to mount another attack? Retire to an island somewhere?

RAT KING I will not give up. Some day, you just watch. The rat king will prevail one day in this Nutcracker ballet.

NEW TIMES What’s your take on the Sugar Plum Fairy? Is all that sugary sweetness an act?

RAT KING Yeah, you know, no one can be that lovely and ethereal and sweet and beautiful all the time. I don’t buy it. Everyone’s like on a sugar high there and they don’t know what’s going on. They just worship the prettiest thing around. You’ve got to have some back bone and some anger to drive you, to be a leader.

NEW TIMES Your battle with the Nutcracker and the toy soldiers is obviously your most famous to date; what are some of your lesser known battles? Do you fight toys exclusively?

RAT KING I mostly have a gripe with the toy world. My mouse army, we have had a few fights with the GI Joes. Those guys kind of want to take over. At Christmas time, though, it’s all those dolls that everyone loves and they ask for for Christmas. It’s just sickening for me.

NEW TIMES Have you ever considered mounting an attack on the North Pole and eliminating the origin of all these new toys?

Civic Ballet presents The Nutcracker Dec. 13 at 2 and 7 p.m. and Dec. 14 at 2 and 6 p.m. at the PAC. Tickets cost $25-$41. For more information visit pacslo.org. The Great American Melodrama and Vaudeville will be staging The Holiday Extravaganza, including Charles Dickens’ A Christmas Carol, through Dec. 31. To purchase tickets call 489-2499 or visit americanmelodrama.com. Santa’s house will be open at the mission in downtown SLO through Dec. 24.