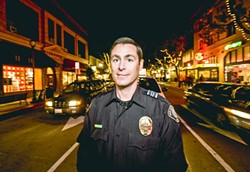 Just after midnight on a recent Friday, Officer Tim Koznek was driving down Higuera Street in downtown San Luis Obispo. The dispatcher’s voice was barely audible over the radio as she talked to officers on patrol, giving details of assaults, vandalism, and violent behavior around the city.

“Here in a college town, it really runs on alcohol,” Koznek said, carefully scanning the behavior of nearby drivers. As if to prove his point, small crowds of wobbly, shrieking students spilled out of the bars at regular intervals.

A black computer screen protruded from the dashboard to his right, displaying bright orange lines of police code and addresses that changed quickly.

As the new DUI enforcement officer for the San Luis Obispo Police Department, Koznek doesn’t have to respond to calls for service. He works the night shift every weekend, searching the city limits for drivers who appear to be under the influence.

SLOPD created the position last November, using a $304,000 grant from the Office of Traffic Safety. Chris Cochan, a spokesperson from that office, said SLO qualified for the grant partly because of the number of alcohol-related car accidents and accidental deaths that happen within its limits.

“San Luis Obispo falls in the bottom, or worst, 20 percent of cities its size in terms of alcohol-related killed and injured in vehicle crashes,” Cochan said. “It ranks even worse when figuring just the crashes involving under 21-year-old drivers who had been drinking.”

The grant funds the position and a number of police operations for one year, with a chance for renewal.

Police Capt. Chris Staley said that the SLOPD was the only department in the county to receive funding for a DUI enforcement position.

“I believe we had a position like this about 20 years ago; we received a grant that was similar to this one,” Staley said. “I think because of the way the town is made up, with all of the night clubs and establishments being in the middle of SLO—it makes sense.”

Staley said the department hopes to renew the position at the end of the year.

“The goal is obviously to reduce our DUI-related crashes in the city,” he explained.

Koznek made six DUI arrests the first weekend he was assigned to the new position, according to the SLOPD Facebook page. By early January, he had made more than 30. Numbers for 2013 weren’t available as of press time, but in 2012, the department made 263 DUI arrests throughout the county, and 242 in 2011.

Koznek has been the recipient of an award given to local law enforcement officers by Mothers Against Drunk Driving and the OTS every year, for several years running, for displaying an exceptional effort in DUI enforcement. In 2011, he took the top honors after making 50 DUI-related arrests that year—more than any officer in the state outside of the California Highway Patrol.

“It basically gives us another officer out on the street to serve the community,” Koznek said. “The problem with DUI enforcement is usually a time thing.”

Processing a DUI arrest can take anywhere from two to three hours from the initial stop.

“We aren’t far from the city jail,” he explained. “But we have to facilitate the tests and do the paperwork.”

When on the prowl, Koznek said he looks mostly at driving patterns. Are they drifting between lanes or making any sudden changes in direction or speed? If he decides to initiate a stop, he pulls the driver over and asks about 20 questions, all while scanning for any physical signs of impairment.

“Are they slurring their speech? Are their eyes red? Maybe there is an odor you can smell off them,” Koznek said. “At an 0.08 [California’s legal BAC limit], it’s hard to hide signs of impairment.”

Usually, he knows whether he’s going to a conduct a field sobriety test after a minute or two of talking with the driver, which may consist of an eye test with his flashlight, a one-leg stand, and the “walk and turn”—better known as the “walk the line.”

“A lot of it depends on how drunk they are,” Koznek said. “Sometimes it’s dead obvious. I’ve pulled people over who have obviously just woken up somewhere. They’ll have red lines on their face, disheveled clothes, or leaves in their hair.”

Sometimes, he doesn’t even need to look for drunk drivers, like recently when he arrested a repeat DUI offender: a male in his 20s who raced down Tank Farm Road toward Higuera Street before crashing into and destroying the living room of a family’s mobile home.

Another night last November, Koznek was pulling out of the station just after 2 a.m. when a woman ran straight into his police car.

“Sure enough, she happened to be drunk,” Koznek said.

Koznek has been an officer with the SLOPD for almost six years, and has worked many nights of patrol since. Many of the people he’s arrested, he admits, have been younger—but not all.

“A DUI is one of those things where you may arrest a person who would normally never be arrested for anything else in their life,” Koznek said. “It really reaches every age group and income class.”

Koznek said he knows it’s not only at night that people drink and drive, but because there’s less traffic on the road, it makes impaired behavior easier to spot.

“I try to stop off of driving patterns, and probably 90 percent of those people are just bad drivers,” Koznek said.

Most of his stops end up with the driver being sent off a few minutes later, without any citation.

“Ultimately, a DUI is a DUI. Hopefully, the numbers of DUI-related accidents go down. That’s the goal,” he said. “We hope to educate people, and unfortunately, sometimes that means getting arrested and having to go to jail—or maybe, it’s a friend that’s had to.”

Intern Jessica Burger can be reached via Managing Editor Ashley Schwellenbach at aschwellenbach@newtimesslo.com.