As an alumnus and current graduate student at Cal Poly, I am appalled by the recent racially charged incident that occurred at the Crops House. I am angered by the university’s unwillingness to take further disciplinary action against the students responsible for the racist display. Although those students allege that they did not mean any harm by displaying a Confederate flag, a noose, and derogatory language directed at African-Americans and GLBT students, I find their explanation difficult to believe. I am certain that they were well aware of the meaning of those symbols. 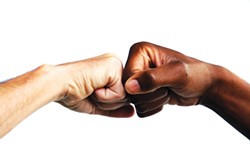 For those of us who have experienced racism on this campus and in this community, the racist symbols are painful reminders of the negative experiences endured by people of color and other marginalized communities in this country. Furthermore, the actions of students at the Crops House were not only racist and incendiary their words have created an unsafe campus environment.

During the last 19 years, I have heard you make many public statements regarding the importance of cultural diversity and tolerance on campus, and I have sat in numerous campus forums with you and other administrators regarding the issues. There is a part of me that wants to believe you are committed to addressing these issues, but your failure to provide significant sanctions against the Crops House students forces me to question your motives and commitment to diversity and tolerance on our campus, as does your delayed response to the incident. By the time you responded to the incident via e-mail, many students on campus had already mobilized to protest the hateful messages. I wonder whether sending an e-mail to students and staff to address such a serious issue was the most effective way to communicate with those affected.

I wonder whether the delayed response was driven by a desire to sweep this issue under the rug and not address persistent cultural intolerance that under-represented students feel at Cal Poly. Was the response simply an attempt at damage control? I find it hard to believe that you have worked diligently to make Cal Poly a world-class institution, when issues of diversity and intolerance continue to plague our campus.

When you realized that the incident was not going to fade away, you issued a stronger condemnation, but by that time many in the community felt it was merely a tactic for you to avoid embarrassment.

Your failure to take strong disciplinary action against the perpetrators makes meaningless your late condemnation of the acts and stated commitment to diversity and tolerance.

Living on campus is a privilege, not a right. By behaving in such an irresponsible manner the students at Crops House forfeited that privilege and violated the school’s trust. But instead of taking swift action, you waited for the students to leave the Crops House voluntarily. Why did you and Mr. Peterson, head of the crops sciences department, fail to remove the students immediately? Where was your leadership and courage?

As an undergraduate at Cal Poly, I was involved in many struggles, including the expansion of funding for the Multi-Cultural Center, establishing an Ethnic Studies minor, and requiring that all students take a course that broadens their understanding of others’ cultures. While involved in these causes, many students faced animosity, racism, delays, and resistance from staff, students, and even the academic senate. Such racial incidents as this most recent one sadly remind me that although some things have changed on campus, many problems persist.

One of the most significant problems is the deplorably low number of African-American students attending Cal Poly. Currently, 1.2 percent of the student population is African-American, versus 6.7 percent across the rest of the CSU system. Although many factors probably contribute to the low rate of African-American student enrollment here, I wonder whether racist events on campus further deter prospective students. Why would students of color or members of the GLBT community want to enroll at Cal Poly, if they know they would face a hostile, racist environment? Why would these students want to come to Cal Poly, if they feel threatened?

I question the sanctions because they amount to nothing more than a slap on the hand. Your failure to act decisively sends a message to students: If you display hateful and racist language you won’t suffer any real consequence. This is the message that you are sending, Dr. Baker.

You have emphasized that this is a teachable moment for the campus community. But why do these teachable moments have to come at our expense, at our pain and public humiliation? Why, Dr. Baker? Enough is enough.

I urge you to muster the courage to act with resolve.

Pedro Inzunza Arroyo is a 1997 undergraduate alumnus and a current graduate student at Cal Poly in the College of Education, studying counseling and guidance. Reach him via the editor of New Times, econnolly@newtimesslo.com.