'Take It or Leave It'

I’m not sure if hardcore fans of the ska-punk Long Beach-based act Sublime (1988-1996) will ever accept a singer other than Bradley Nowell, who died of a heroin overdose in 1996. Sublime reached the peak of its popularity right after Nowell’s death when the band released its third studio album, a self-titled affair that also generated the band’s only No. 1 hit, “What I Got.” Since then, there have been some Sublime tribute acts, but the band was considered all but gone. 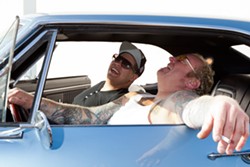 Then in 2009, the surviving members of the band—Bud Gaugh and Eric Wilson—enlisted Rome Ramirez to join them, and they started to perform as Sublime, though a judge later banned the group from using the name since Nowell’s estate owned it. A settlement was eventually reached, and they began performing as Sublime with Rome, releasing the album Yours Truly about a year ago. Then seven months ago, Gaugh announced he was leaving the band, replaced by Josh Freese.

Is this incarnation Sublime? Nope, sure ain’t. But that doesn’t mean Sublime with Rome isn’t an awesome ensemble delivering punk, reggae, and hip-hop-inflected pop music. Rome’s an engaging front man, and unlike Nowell who was notorious for showing up trashed or not showing up at all to gigs, Sublime with Rome will be at Avila Beach Resort on Tuesday, July 24, with hip-hop act Cypress Hill and punk-reggae act Pepper (5 p.m.; all ages; $35 at all vallitix outlets).

In addition to performing some of the music (“Date Rape,” “Santeria,” “What I Got”) made famous by Nowell and company, Sublime with Rome has released some infectiously catchy tracks, such as “Take It or Leave It” and “Panic.” Three huge acts on a Tuesday night at the beach? Sounds pretty sweet.

According to his press materials, “Captain Ambivalent is heading for California, not to find gold, but to bring it. A gold accordion, that is. Just don’t expect ‘accordion music.’ The Chicago area artist sings silly funny songs with pop, rock, folk, country, and even hip hop overtones, appealing to fans ages 4 to 74.”

“The Captain (aka Dan Biemer) may be joined on stage by long distance collaborator and L.A. resident Mark Frey. For the album, the two expanded Biemer’s solo act into an accordion, drum, and tuba-based sound they call ‘oom-punk.’ But Frey won’t be playing tuba live. ‘I used a sampler,’ he confesses, ‘and channeled the fat kid from the old Far Side cartoons.’”

You can read all about your chance to join me at SLO Brew on Friday, July 20 (7 p.m.; 21-and-older; $10), to see High Voltage—A Tribute to AC/CD on page 39. Basically, two AC/DC fans can get in free and sit in one of the booths and tell me if this local tribute act measures up for fans of the original band. I’ll even buy the first round. For your chance to win, simply e-mail me a few sentences about why you should be selected to gstarkey@newtimesslo.com.

Also, don’t forget about the big fundraising concert with Itchy McGuirk on Saturday, July 21 (7:30 p.m.; 21-and-older; $20). It’s the band’s 20th anniversary, and for the third year in a row, they’ve reunited for one fundraising show for a worthy cause—in this case, Dan Ernst, owner of Grand Central Music and Conservatory, who’s been diagnosed with chronic kidney failure. Though his insurance covers some of the treatment (he’s expected to make a full recovery, by the way), there are still some hefty co-pays and out-of-pocket costs.

They write the songs that make the whole world sing

After many years in the Washington, D.C. area, BanjerDan (aka Dan Mazer) has moved to Paso Robles, hence he’s ready to play Steve Key’s Songwriters at Play showcases as a new local on Sunday, July 22, at Sculpterra (1 p.m.; all ages; pass the hat). His Americana music mixes straight-ahead bluegrass as well as folk, country, and blues. In addition to banjo, he’s also adept at guitar and mandolin, and he’s got some funny stories to boot. Also on the bill will be Krystal Park, Ryan Dishen, Paul Fifield, and a trio called Ask Sophie.

Finally, on Wednesday, July 25, check out the showcase’s newest location, Upper Crust Trattoria, with Sara Petite and Karen Tyler (7 p.m.; all ages $10). Petite is an award-winning country singer-songwriter, and Tyler is a potent blues singer, who’ll be joined by her trio Valerie Johnson and Al B Blue.

As usual, no big surprises. Sure, they have the biggest venue in the county, but for some reason, they don’t seem make much use of it.

And as usual, some of the most interesting acts are the ones on the free stages, such as Paul Revere & The Raiders on July 19, Los Lonely Boys on July 24, Debby Boone on July 25, and Big Bad Voodoo Daddy on July 26—all on the Frontier Stage at 6:30 and 8:30 p.m.

How’s this for a heapin’ helpin’ of countrified awesomeness? This Thursday, July 19, the Frog and Peach is host to Huckle, Hayburner, and Spanky in a tripleheader, a hat trick, a ménage a trios of talent! Huckle is a NorCal singer-songwriter who sometimes plays the Weissenborn, Hayburner is our own country calamity, and Spanky may or may not wear shoes, but the boy can write some damn fine songs. Yee haw!

Fish Out of Water brings its funky sounds to Concerts in the Plaza on Friday, July 20, from 5:30 to 7:30 p.m. This is their first show back in California after wrapping up their sixth national tour, and they plan to head back to Australia in October. Though SLO is officially their home, after three solid years on the road, I think it’s time for this hardworking band to admit they’re vagabonds.

Get ready to swing like a ’40s sailor on shore leave when the Royal Garden Swing Orchestra plays D’Anbino tasting room on Friday, July 20, from 8 to 10 p.m. This nine-piece “big” band sounds bigger than nine and has more than 200 arrangements of memorable tunes from the swing era to modern classics. Tickets are $10 (or $5 for Record Club members).

Who put the California chic into Appalachian hillbilly music? The Appellation Bluegrass Band, that’s who! The Santa Margarita KOA Campground Summer Concert Series will feature The Abbies this Saturday, July 21, as they perform “Raditional” (radical/traditional) bluegrass music from Appalachia, reinvented for California. Join hosts Karen and Rex Jacobsma and the Abbies at 7:30 p.m. for plenty of high lonesome crooning and picking under the stars. The concert is free, but bring some dough for hot dogs, barbecue sandwiches, snacks, and drinks. Take the Santa Margarita exit from the 101 freeway, drive just shy of eight miles toward the lake, and turn in to the parking area just past the KOA campground. You can’t miss the Hay Bale Stage; it’s right in front of you.

Monterey-based singer-songwriter Ann Kelly is coming to D’Anbino Winery’s tasting room on Saturday, July 21, touring in support of her new EP, Petals and Thorns. I just checked out her sultry new video “Undone Without You,” on which she seems to be channeling Nancy Sinatra’s attitude while wearing Stevie Nicks’ wardrobe and thinking about Julie Newmar. Local musicians Adam Levine, Dave Becker, Bill Wingfield, and Dean Giles from Human Nation will provide musical support, along with Emmy Award-winning composer Mark Ross on keyboards. If you’ve been listening to KPYG 94.9FM, you may have already heard Kelly’s music (8 p.m.; $10 or $5 for Record Club members).

Broadway veteran Gale McNeeley will star in the show “A Jacques Brel Cabaret,” on Saturday, July 21, at the Steynberg Gallery (8 p.m.; all ages; $10). Gale McNeeley, Betty Faas, and Chuck Osborne will bring the songs of Belgian singer-songwriter of the 1950s, ’60s, and ’70s—Jacques Brel—to life, reminding listeners why Brel was such an influence on the likes of David Bowie, Leonard Cohen, and Rod McKuen. Ray Charles, Judy Collins, John Denver, Nina Simone, Frank Sinatra, and Andy Williams are a few of the artists who have covered his material. “In an age where the classic troubadour seems to have vanished, Jacques Brel reminds us of the need for songwriters who translate universal emotions into song,” McNeeley said. “It has been decades since he was last performed on the Central Coast.”

Former SLO resident Mariee Sioux returns to her old stomping grounds for a 4 p.m. free in-store show at Boo Boo Records on Sunday, July 22. “If I remember correctly, she played during a film festival sold out screening of The Graduate,” said Boo Boo’s Malik Thorne. The contemporary folk singer-songwriter released Faces in the Rocks in 2007 on the label Grass Roots Record Co., which was a follow-up to her self-released efforts, Pray Me a Shadow (2004) and A Bundled Bundle of Bundles (2006). Now she’s touring in support of Gift for the End (2012). In addition to being a mesmerizing vocalist, she’s also a fine finger style picker!

Lindsay Clark, a Portland-based folk musician, is touring in support of her last CD, Home of the Brave, and making a stop at Linnaea’s Café on Wednesday, July 25. “The CD was recorded here with Sean Ogilvie (of Portland bands Musee Mecanique and Laura Gibson) in 2011, and I am currently working on a new record of banjo and guitar songs to be finished by the end of the year,” said Clark.