Take it outside: SLO and Santa Maria test parklets and street closures

by Peter Johnson and Zac Ezzone

Photo Courtesy Of The City Of Slo SAFE DINING San Luis Obispo has funding to create parklets for some restaraurants to accommodate more outdoor dining.

San Luis Obispo had a long-term vision to make its downtown a more pedestrian friendly place by closing streets to traffic, but thanks to COVID-19, those plans are about to get fast-tracked.

In an effort to accommodate social distancing and allow restaurants to expand their outdoor seating, SLO will begin closing Higuera and Monterey streets to cars on the weekends, starting on June 18. The closures are part of a one-year pilot program to safely reopen the downtown for business.

"Our businesses are really excited about any opportunity to bring people back downtown in a way that is safe," said Bettina Swigger, CEO of the Downtown SLO association. "We have such a walkable downtown, so I think that's going to be a cool behavior to see change."

The closures will start with Monterey Street on June 18 and will stretch from Mission Plaza to Osos Street, closing from 5 to 8 p.m. on Thursdays and Fridays, and from 11 a.m. to 8 p.m. on weekends. Starting June 26, Higuera Street will also close Friday through Sunday during the same hours.

Restaurants can use the streets and sidewalks to expand their outdoor seating during the closure hours. SLO also plans to set up tables and chairs in Mission Plaza and other public spaces, like parking lots, for visitors to bring their to-go food to. Two city surveys of businesses and residents found that a strong majority of both supported the plan.

Samantha Welch, operations manager at Luna Red, Novo, and Mint & Craft, said that the street closures will help her restaurants be able to expand capacity while also adhering to social distancing. On top of that, Welch said the closures may generate more of a buzz downtown.

"I think it's going to build a downtown community center that we miss from not having farmers' market," she said. "I think the energy and idea of it will create a little bit more of a draw for people."

For restaurants on downtown's side streets that will miss out on the street closures, SLO's new parklet program may be a draw. The city says it has funding for four to five parklets to install outside of interested businesses. One of those is Big Sky Cafe on Broad Street.

Big Sky Cafe Owner Greg Holt said a parklet will not only expand his seating capacity in a safe way, but also signal to passersby that the cafe is open for business.

"It's just going to remind people that we're here," Holt said. "In my mind, it's the direction that I think downtown should go. Social distancing is absolutely crucial. And it's fun. It gets people outdoors. It gets people out in the world."

Similar to San Luis Obispo, the city of Solvang has temporarily closed off vehicular traffic to a portion of Copenhagen Drive to provide businesses along the stretch of road with additional space to expand into. The city also plans to dress this corridor up with rows of lights strung overhead and some patches of greenery placed throughout, according to city officials.

But these types of moves aren't possible or practical everywhere. Santa Maria, which doesn't have the same type of downtown pedestrian traffic as Solvang or SLO, isn't shutting down streets. But it's allowing businesses to expand onto sidewalks and parking lots. 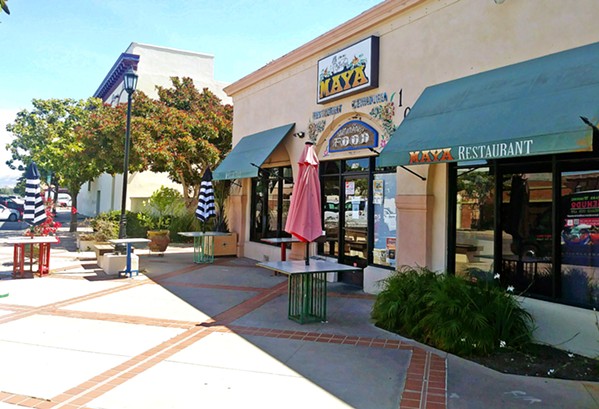 Santa Maria Community Development Director Chuen Ng said that in general, there aren't many restaurants in the city with patios, in part because outdoor dining is more common in urban-like settings with pedestrian-heavy streets, as opposed to shopping plazas. Regardless, he said the city hopes businesses take advantage of this flexibility that'll increase the amount of people restaurants can serve while dine-in service is limited due to social-distancing measures.

"There might not be enough sidewalk areas to allow for that, but we're asking businesses to be creative, and even if there is limited space around the building, the parking area is a consideration," Ng said.

Usually restaurant patios are approved as part of a project's permit, and setting up a few tables and chairs on a sidewalk is a much more informal process, Ng said. Business owners are supposed to send him an email with a photo of the area they want to expand into and a description of their plans. But this isn't something the city is strictly enforcing.

As of June 11, Ng hadn't received any such emails, but that doesn't mean it's not happening, he said. Ng points to Maya Mexican Restaurant as an example that he can see right across the street from his office. While the restaurant already had a patio in place out back, the restaurant now has one out front as well.

Maya owner Teresa Paredes said her restaurant has remained open throughout the pandemic—fulfilling takeout and delivery orders—but sales have taken about a 60 to 70 percent hit. As restrictions have loosened, customer traffic is improving, but the restaurant is still only operating with about 20 percent of its staff, she said.

With the inside of the restaurant closed, having the extra patio space where people can sit down to eat takeout meals has been helpful for business as well as for customers who are eager to enjoy a meal outside of the house.

But Paredes said it's still not quite the same experience for her customers. She said she'll feel better once the restaurant's dining room is open, although, even then, her staff will have to adapt to constantly wearing face masks and other guidelines.

"What I want people to know is to be patient with every business that's out there," Paredes said. "It's a change for sure. I think I'll feel more relieved when we open and I know how busy we will be." Δ