At the SLO Botanical Garden, the eighth annual Art Eco showcases awesome art made of junk

Something happens to sculpture when you bring it outdoors. Seen against the clinically white walls of a gallery, the artworks in the eighth annual Art Eco show might read as imposing, untouchable, and expensive. But under the broad blue sky, dwarfed by oaks, with Mediterranean flowers nipping impertinently at their heels, the sculptures in this year’s Art Eco show seem delicate and unobtrusive, a small part of the landscape. 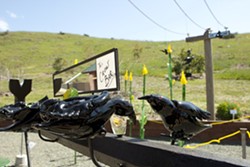 Populated by work made largely of reclaimed materials—bones, skulls, rusty gears, and bottle caps are among the show’s extremely mixed media—as well as natural resources like wood, clay, and stone, this year’s Art Eco show, sponsored by Frame Works, includes 75 pieces by local artists. Finding them all, though, can be a challenge. (Once you become accustomed to seeking out fine art in a garden, you may start to see it where there is none, catching yourself fawning over a stray flowerpot or praising the rustic coloration and industrial aesthetic of an aboveground pipe.)

But there’s no overlooking pieces like George Jercich’s wonderful Crow Bar, which is what it sounds like and more: glass crows perched on an oversized crowbar, having a quiet drink, by the looks of things. Jercich’s corresponding piece Crow Installation may be the only site-specific piece in the show: a power line stretching toward the roof of one of the garden’s covered walkways, over a blown glass cornfield. Crows alight here and there, or hang suspended in mid-flight, swaying in the soft breeze. It’s humorous yet sophisticated.

Carol Paulsen’s Global Totem is also unexpectedly true to its name: a totem pole made of globes, each sphere painted over with the likeness of an animal. It must be tricky to paint over such a curved surface, but Paulsen makes it look effortless, each animal appearing as though it had been captured in a bubble. The largest globe has become a bear, the tiniest one a bee.

There are indoor objects, too, such as Lena Rushing’s fabulous assemblage Predator, a distinguished-looking owl—monocle, vest, and all—who upon closer inspection turns out to be partially made of tiny skulls. April Kluver’s Gabriel’s Nightmare and Glamourpus, both constructed largely of bottle caps, are witty little sculptures; the first a rattlesnake, its garden-hose head poised for the attack, the second an octopus with pink curlers at the end of each tentacle. Its body is a can of Chicken of the Sea tuna, its head a light bulb.

Artist Sara Egerer, Frame Works’ curator and the show’s organizer for the past eight years, has seen the event grow steadily into a local institution. With Art Eco in mind, several of the show’s regular artists have started collecting odds and ends throughout the year, rather than throwing them away, she said. While not all of the work in this year’s exhibit is recycled—Egerer recently expanded the requirements to include anything made with natural materials—Art Eco nonetheless strongly emphasizes the use of reclaimed stuff. It’s a more environmentally friendly option, and presents new creative challenges as well.

“When you’re working with springs and bones and bottle caps, it’s an entirely different creative process than sitting in front of a canvas, trying to convey a landscape,” Egerer explained.

Egerer’s loaded assemblages Manifest Destiny and Mixed Blessings, both constructed from fearsome-looking blades, syringes, and other scary-looking found things, were recently seen at the pop-up art gallery known as the Phantom Project. Her work isn’t included in this year’s Art Eco show—the artist shrugs that she’s simply too busy—but it’s clear she knows a thing or two about making fine art out of junk. In judging found-object pieces, she says, one of her key criteria is how successfully an artist has transformed a piece’s original components into a fresh and convincing whole.

She referenced Mike McNutt’s deceptively simple Yard Bird by way of example. It’s mostly just clippers and a pitchfork, but what initially meets the eye is nothing other than a leggy, inquisitive bird.

The pieces look at home in the garden, as if they’d sprouted out of the ground. So much so, in fact, that de-installing the show every year, Egerer said, is something of a painful process.

“It’s always so sad when we take down the show,” she lamented. “It feels so empty.”

Arts Editor Anna Weltner is made of yarn and aluminum pull-tabs. Contact her at aweltner@newtimesslo.com.