The art of happiness 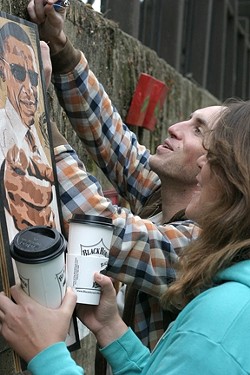 I’m still trying to figure out what’s being exchanged.

Robert Maxwell is pulling down art by Stenzskull from the east retaining wall of San Luis Creek, underneath the footbridge between Frog and Peach and Mission Plaza.

The image he grabbed is of an old-fashioned microphone. Maxwell wants it for his home music studio. He shows up, sees it, wants it, takes it. Sweet art for nothing!

Stenzskull—well, his real name is Dan Woehrle—sits on a bench on the other side of the creek, watches as Maxwell takes the art, poses for a photo, and walks away. Woehrle works for a living, at Pottery Barn of all places. He’d like to make art for a living.

So what is being exchanged? Maxwell has a painting; what does Stenzskull have?

I’m not even sure if Stenzskull’s lucky or unlucky. Most of the artwork on display was dropped off earlier at New Times’ office and San Luis Art Supply. They’re stacked against the front of the store when I show up at 9:30 a.m. Later I watch as they’re carted away by strangers; most of the artists are not in attendance and don’t know who has them now. At least Stenzskull sees their faces as people take his art and leave.

How did we get here?

About half a dozen artists who are in attendance and just as many art lovers march through downtown SLO carrying paintings. We get to Mission Plaza, where we want to set up this underground, impromptu, guerilla art show, but the plaza is filled with pop-up shades under which reside old people hawking homemade candles, jewelry, and other knickknacks. Craft fair! The antithesis of a guerilla art show!

There’s Christine Wallace from Parks and Rec sitting on a low-back chair in the grass.

“What are you doing?” she asks, shooting eye daggers at the paintings under my arms and the arms of the people with me.

“We’re having a guerilla art show,” I say.

“If you set up in Mission Plaza, I’m kicking you out.” The Wallace glare burns my retinas.

“You and what army?” I spit back at her in my head, but instead I say “OK.” It’s a guerilla art show; we’re not actual guerilla fighters, through as we’re setting up, Neal Breton of San Luis Art Supply keeps mentioning how we should go back to the plaza so we can get kicked out, which apparently sounds like fun to him. He doesn’t know what a ball buster Wallace is. Seriously, I’ve seen her just massacre some balls. 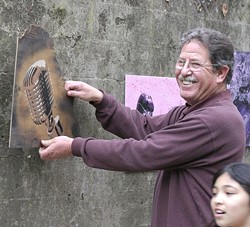 It’s a gray day and curious onlookers watch as we use poster putty to mount images on the wall, and twine to tie up the heavier pieces from the fence atop the wall. Some people see us and approach slowly, like they’re in a spook house, afraid that something will leap out at them, causing coffee to squirt out of their noses.

Then Josephine Crawford shows up with some prints she’s donating. Crawford was a professional dancer and costume designer who makes colorful, vibrant, energized works of art, and she’s limping. The doctors want to replace her hip.

“I’m 72 years old, and I’m only going to live another 15 or 20 years,” she says in that charming British accent of hers. “Do I really want someone slashing at my hip? Maybe I’ll just be a cripple.”

Most of the donating artists are young up-and-comers, not an established artist like Crawford.

“Why are you giving your art away, Josephine?”

“To be hip and keep up with all the kids, the bum hip notwithstanding,” she says, eyes twinkling despite the overcast.

Art keeps you young, but six decades of dancing murders your hip.

“How’d you two end up here?” I ask, sucking in my belly and raising one eyebrow alluringly.

“We read about it,” says the blond one, whose name turns out to be Maggie Nichols. “It’s the coolest thing!”

“Which piece do you have your eye on?” I ask the brunette, whose name is Becky Griswold.

“There’s a black and teal graffiti-looking piece I like,” she says.

Maggie is 21 and Becky is 22 and all the belly sucking and eyebrow raising in the world isn’t going to make me young enough. I press on.

Mika McGee and Noah Parker have set up a blockade around Stenzskull’s image of Obama. If somebody else wants that piece of art, they’re going to have to go through these two.

They also want another of Stenzskull’s pieces, but my sister Linda snags it for my niece Nikki, and my other niece Lindsey grabs this purple skull design. It’s a feeding frenzy. The art is disappearing fast and furiously. Christmas has come early.

I wander over to Stenzskull, who’s got a wry little smile on his face.

“You seem to be the most popular artist here,” I say.

“I just like getting my stuff out there,” he answers, working hard to suppress a smile. “Gotta get people to know my name.”

Suck it, Disneyland! The happiest place on earth last Saturday was the retaining wall on the east side of San Luis Creek. Apparently, event organizer the New Art Collective is in the business of making people happy. Implausibly, that’s a pretty good business to be in at this exact moment.