Take that, rewind it back

The artiest happenings of 2011

The inaugural Jewish Film Festival, organized by the Jewish Community Center, was held at the Palm Theatre.

Colin Mochrie and Brad Sherwood of Whose Line is it Anyway? performed a death-defying improv comedy act involving blindfolds and mousetraps at the Performing Arts Center. The PAC was also host to the touring Broadway show Spring Awakening, winner of eight Tony awards. A daring rock musical based on a rather depressing 19th century German drama, Awakening boasted a stellar cast—among them San Luis Obispo native Sarah Kleeman.

In conjunction with her PAC appearance, New Times spoke with actress/comedienne Lily Tomlin on her career in film, theater, and TV—and how best to get dirty words past television censors in the ’70s.

But there was plenty of homegrown arts and entertainment as well. This is Rock ‘n’ Roll: The Alan Freed Story— directed by Kevin Harris, choreographed by Drew Silvaggio, and written by former New Times Arts Editor David Vienna—rocked the SLO Little Theatre. 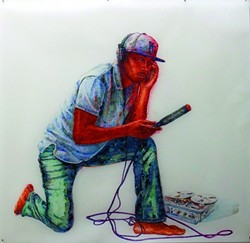 Painter Mark Bryan—known for scathing political satire, robots, monkeys, and depictions of fanciful, apocalyptic disasters in pleasant, rural settings—returned to the Steynberg Gallery with “Down the Rabbit Hole,” honoring yet another muse: bunnies!

Meanwhile, Cuesta College’s Performing Arts Department worried about budget cuts and the fate of their performance venue as they rehearsed their sexy rock opera Rent.

The SLO Symphony celebrated its 50th anniversary with a finale concert featuring Beethoven’s Symphony No. 9. Composer Craig Russell was called upon to create a 20-minute piece to precede it, a daunting task he likened to opening for the Beatles. 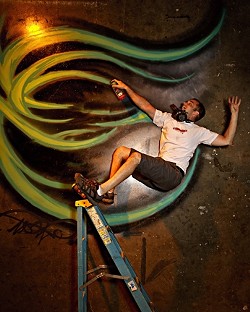 Seeing an influx of empty storefronts in downtown San Luis Obispo, New Times Staff Photographer Steve E. Miller set out to capture these visions of vacancy with his camera and iPhone4. A resulting New Times photo essay revealed the unexpected beauty in these abandoned spaces.

It turned out Titanic actor Billy Zane is also an abstract painter! The work of Zane and fellow abstract artist Janet Roberts was displayed in a group show at Cambria’s Vault Gallery.

It was festival season! The Central Coast Shakespeare Festival returned with As You Like It and A Comedy of Errors—though the setting of the latter was transplanted from Ephesus to the seedy territory of backstage Las Vegas, circa 1960.

Festival Mozaic, a 10-day celebration of Mozart and more, explored the intersection of classical music with pop culture.

New Times turned 25! Our birthday issue featured, among other things, a documentary “revealing” the identity of the Shredder, drawings of our favorite Steves (in honor of our founder, Steve Moss), and the best of our annual 55 Fiction contest.

Our Autumn Arts Annual featured photographs of artists lying on the ground, trying to appear as if they were standing up. It makes a lot more sense when you see it.

Over a period of 10 days, the SLO Plein Air Festival sent 50 of the nation’s top plein air artists flocking to the idyllic sea, land, and cityscapes of San Luis Obispo County.

At the PAC, Hideo showcased video game and anime music in an epic theatrical concert experience.

This writer followed Oakland installation artist Suzy Poling around for two days for a cover story on the construction of her exhibit “Into the Center of the Earth” at Cal Poly’s University Art Gallery.

The work of Santa Maria photographer Mark Velasquez came to the Steynberg Gallery in the solo show “Keep the Faith.”

Finally, at Vale Fine Art, “A Little Nightmare Before Christmas,” showcasing the art of Lee Harvey Roswell and Edward Walton Wilcox, was a welcome distraction from holiday cheer.

Arts Editor Anna Weltner has 2,011 reasons to remember and forget last year. Contact her at aweltner@newtimesslo.com.