1. Why did the SLOPD finally arrest firefighter John Ryan Mason?

A: Because he slapped the face off another man’s face.

B: Because of a marital spat.

C: Because New Times asked why they hadn’t arrested him (probably).

D: Because their car ran out of gas. They had a flat tire. They didn’t have enough money for cab fare. Their tux didn’t come back from the cleaners. An old friend came in from out of town. Someone stole their car. There was an earthquake. A terrible flood. Locusts! IT WASN’T THEIR FAULT, WE SWEAR TO GOD!

A: The first consultant was tied too closely with the mining industry.

B: The first consultant was too expensive.

C: The first consultant backed out.

A: Having poor fashion sense. 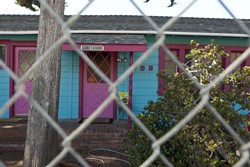 B: His salary is too high.

C: It’s all an illusion.

D: He has a conflict of interest.

A: All pay raises.

A: …to deter the kids from using drugs.

B: …to show the kids that drug dealing does indeed pay.

D: …because the Freudian overtones make it really hard to let go of.

B: Anyone who doesn’t look happy.

D: Anyone who looks homeless.

D: It actually made the university money.

E: Enough to completely fund the higher education of at least five Californians.

A: Removal of copper countertops in the president’s Spanos Stadium suite.

B: Installation of a motorized velour acoustic curtain at the president’s box at the Performing Arts Center.

D: Installation of a trap door in front of the President’s Administration Building desk.

B: It must have slipped their minds.

C: They were worried about hurting team spirit.

D: Why beat a dead Mustang into the ground?

C: They’re to be applauded.

A: A trove of Spanish gold.

B: A shipping container.

A: Through meticulous police work and a thorough understanding of state law.

B: Tailing them to meetings with the Sinaloa Cartel.

C: Proving, through forensic auditing, that they were making lots of money.

A: Providing thousands of gallons of water to happy customers in the North County.

B: Threatening to bankrupt Paso Robles.

C: Cranking up water bills to unprecedented levels in the city of San Luis Obispo.

A: The combined seismic threat from four nearby fault lines presented a question of safety.

B: The plant’s infrastructure and its components are aging.

C: The company was too busy settling with San Bruno victims and their families.

D: Americans got worried about the dangers of atomic energy after some nuclear plant in Japan blew up.

D: What happened? Where?

B: Citizen outrage over SWAT tactics used on nonviolent suspects.

D: The state could no longer afford to fund it.

B: In the Carlton’s gift shop.

C: Wherever he tells Atascadero city officials he wants it to be.

D: Within the city’s Office of Economic Development.

A: Asking the United Lot Owners of Cambria to cough up some green.

B: Petitioning the Army Corps of Engineers to invade Dubai.

C: Setting up a lemonade stand in front of Rabobank.

A: No one had hipped them to the whole “separation of church and state” thing.

B: The 700 Club supports the Theory of Evolution now, doesn’t it?

C: The American Fascist Movement’s flyer got held up at the printers.

D: It didn’t want to get sued by the powerful Child Evangelism Fellowship.

B: Oil strike! Head for them fracking hills!

D: Plans for a 700-unit home development and golf course.

A: Often seem to lose track of money.

B: Can be crazy in all sorts of ways.

C: Provide services for much of the county.

A: To keep out annoying weekend shoppers.

B: They forgot to do it in the first place.

C: To encourage people to park farther away and get some exercise.

D: To help raise money for a parking structure to replace all the public parking given to developers. 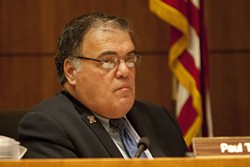 A: To pay for downtown improvements.

B: To compensate for the shrinking list of city projects.

A: The Zinfandel crew.

A: He slinked away with his tail between his legs.

B: He circulated a petition.

C: He put a sign above his door that said, “Asshole’s neighbor.”

D: However much self-respect weighs.

C: A lack of representation.

D: Supervisor Jim Patterson was cracking wise about their mommas.