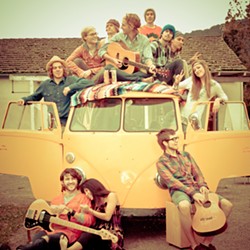 Last year at the New Times Music Awards, a lanky, bird-like, toe-headed Cal Poly student took home Best Solo Performer based largely on his arresting song “1937.” It was clear then that Chase McBride had it all: rare songwriting talent, an infectiously interesting voice, and the sort of comfortable, casual stage presence that creates immediate intimacy with the audience.

Now McBride is back with two terrific new recordings. The Good Fight is a carefully produced 11-track album filled with hooky folk pop songs of the kind that have made household names of laidback, mellow cats like Jack Johnson and Ben Harper. Wild Child is a 5-track collection of songs recorded when McBride and his band rented a house in Nor-Cal to self-produce songs in a more casual setting. Wild Child is a more intimate, personal recording, while The Good Fight features the sort of production values expected from a major label release, which brings up an interesting point…

“Despite garnering serious interest from labels and management companies during the recording of The Good Fight, we decided to release these projects on our own because of a few reasons,” explained McBride, “the first being that we funded the entire two albums from money we’ve made off of our debut EP. We didn’t take on any debt seeing as we were able to record Wild Child for next to nothing due to the self-production and group of gracious amigos that helped us along the way. 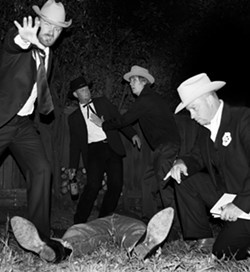 “The second being that our view of success is not reached by convincing a group of businessmen to endorse our art with the intent to make money, no doubt neglecting the quality of art produced,” he continued. “We’re more interested in bettering our craft as musicians and songwriters. If we can exponentially grow and support the act of making that art simply by sharing it with others, the rest should fall into place.”

To that end, McBride has formed his own label, Sun Tribe Recordings, which he “fully intends on growing in the coming years.” Unfortunately for local fans, McBride has perhaps correctly come to the conclusion that SLO County isn’t a big enough market to launch his career, so he’s made the decision to leave Cal Poly and pursue music full-time in San Francisco.

“We’ve kept everything surrounding the albums in-house thus far, a heavy influence on my decision to take a leave from university. During the recording of The Good Fight, I realized that if I wanted to really give these albums a full effort, I wouldn’t be able to balance the school workload with the music workload. So, given the momentum we’ve gathered, I’ve decided to joyfully work full-time on the music.”

You can send Chase McBride off in style next Saturday, June 5, when he and his band will play a double album release party at Dowtown Brew with opening acts Central Currency and Loomis & the Lust (7:30 p.m.; all ages; $7 presale or $9 at the door).

Red Eye Junction continues its foray into remorseless, countrified twang with Better Days, the third album by the old-fangled honky-tonk act that consists of a bunch of former punk rockers in cowboy hats, western shirts, and pointy cowboy boots. Not that these guys inject anything punk-like into their music. Instead, they play it straight, approaching the music with a laudable reverence. Sure, there’s some affectation—all hat and no cattle not withstanding—because front man Reid Cain takes on the vocal sounds of a dude whose nasal passages are clogged with chewing tobacco. Cain makes High Sheriff Ricky Barnes sound like he’s singing from his diaphragm! In short, Red Eye’s music is the sort of sound you might hear coming out of an AM radio in the late-‘40s. Like the band’s nostalgic sound, the songs’ lyrics harken back to a time when all a country song needed was a lonesome fellow who’s leavin’ town. Exhibit A: “Dog Tired” Well I’m dog tired of this dead end town/ Gonna pack it up and head on down the road/ It ain’t much that I leave behind/ An empty house and a lonely life, oh Lord. Country cliché to be sure, and yet that familiarity combined with some terrific orchestration make the songs on Better Days a hell of a lot of fun as long as Reid’s overly nasal voice doesn’t put you off.

Cain called the new album “a huge step forward for the band in terms of musicianship, songwriting, and production. The first two albums were completed on a pretty tight schedule, so there were concepts that didn’t come out quite as we imagined it. This album however, really captures the idea and sound we had in mind when we started this project just over three years ago. The new album has been six months in the making. It features a ton of great local guest musicians, 14 if I count correctly.”

Pedal steel master Bob Hamilton, banjoists Zach Daniels and Peter Morin, mandolinists Dan Keller and Dave Seidenzahl, cellist Bob Liepman, and fiddler Albert Dines all add to the instrumentation, and Cain gets vocal help by Natalie Haskins on one track and Cody Pendant on another. Curtis Marsh also takes over lead vocal responsibilities on a song he co-wrote called “Beer Bottles Clinkin’.” The album’s 13 other tracks were all penned by Cain.

“We’re coming off of a strong year in 2009 that saw us do a three week European tour, two West Coast tours, and a short tour through Colorado,” said Cain. “This year looks to be just as busy starting this weekend.”

Red Eye Junction plays an album release party at Downtown Brew this Friday, May 28, but instead of their normal quartet, they’ve added four more players for the event, which will open with a set by Bob & Wendy (8 p.m.; 21-and-older; $7 presale or $9 at the door).

Blues at the beach Jonny Lang was still in his teens when he burst onto the blues scene in the ‘90s. Since then he’s become a road-savvy showman who’s live concert experience was well-captured on Live at the Ryman, his newest CD released last month. You can feel the heat radiating out of his smoking guitar chops and throaty, soulful voice. It’s a good indication of what fans can expect this weekend.

Of The Ryman, located in Nashville, Lang said, “It’s one of those magical places where you can’t help but be inspired. I think a lot of that magic and inspiration makes its way onto this recording. It’s a collection of some of our best songs from our studio recordings—only more energized, thanks to a great group of musicians and a very receptive audience.”

Hey, Jonny, you think that was good, wait until you get a load of 3000 screaming fans at the beach.

“I’ve wanted to do a live record for a long time, because I feel like our band is strongest in the live setting,” continued Lang. “I think this record is a good representation of our live show, and an accurate reference for people who haven’t seen us yet. Hopefully it will be an inspiration for them to come out and see us.”

“In the old days,” said the group’s co-founder, saxophonist Stephen “Doc” Kupka, “the thought of doing other peoples’ songs would have been unthinkable, but this felt like a really good way to go—our take on classic great soul songs that we listened to on the way up.”

“We were resistant at first to the idea,” added the band’s other co-founder Emilio Castillo. “But a third of the way into the recording, we realized how good it was working.”

Always inspired by soul and R&B music, Tower of Power formed in the Oakland area of California in 1968. Their first album was the 1970 release, East Bay Grease for Bill Graham’s San Francisco Records.

Bassist Rocco Prestia said that while young music fans are learning about classic soul from them, the group is catching up with the youngsters: “It’s common knowledge that this is the way the music business is going—downloads. It’s all computerized and exciting.”

Tower of Power maybe be 40 this year, but they’re keeping it fresh.

Tickets are available at all VALLITIX outlets including Boo Boo Records in SLO, the Mustang Ticket Office on the Cal Poly Campus, and at the Mid-State Fairgrounds Box Office in Paso Robles; on-line at vallitix.com or by phone at (888) 825-5484.

Don’t forget Downtown Brew has two awesome punk-fueled rockabilly and psychobilly acts lined up this Thursday, May 27 when The Sons of KD Elder open for The Chop Tops (7:30 p.m.; all ages; $8 presale or $10 at the door). 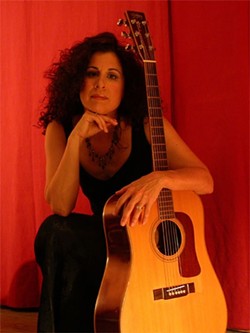 Singer-songwriter Shakeh hits Santa Margarita with two gigs this week: See her Thursday, May 27 at The Porch Songwriters at Play Showcase, which starts at 6:30 p.m.; then again on Friday, May 28 at The Porch for a 7:30 p.m. solo show. Her “Adult Contemporary Eclectic” style “spins musical tales that take the listener on a unique journey,” she said.

Boot scoot to the Cali-country sounds of Mud Thump this Saturday, May 29 at The Clubhouse (7 to 10 p.m.; $5 at the door). “Guitar, mandolin, banjo, and upright bass combine with strong harmonies to produce our California homegrown sound,” said the band, who’s known for its “engaging stage presence and lively originals that run somewhere between bluegrass and alt-country.”

One of my favorite ‘80s ska acts, The English Beat, is returning to Downtown Brew on Saturday, May 29 (8 p.m.; 21-and-older; $20 presale or $22 at the door). After a hiatus from music in which front man Dave Wakeling became involved in green energy, he’s resembled an incredible band and is playing his hits with the same raucous enthusiasm that made The English Beat one of the biggest acts of the New Wave era. Every time they play, the Brew is packed to the gills with an audience bouncing in unison to the sounds of “Save It For Later,” “Mirror in the Bathroom,” “Can’t Get Used to Losing You,” “I Confess,” and even Wakeling’s post-Beat band General Public’s “Tenderness.” 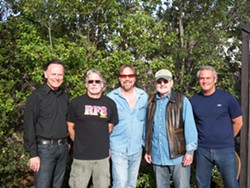 The 27th Annual Strawberry Festival happens this Saturday and Sunday, May 29 and 30, in a family-style event that brings together thousands of visitors and residents to enjoy activities and entertainment. This year’s entertainment line-up is the biggest in the festival’s history!  In fact, there’re so many acts I can’t even begin to list them all, but here’s a few: Shival Experience, Huayllipachia, Jason Farrar & Charlie Foppiano, Jody Mulgrew, Wally Barnick & Kenny Blackwell, and Unfinished Business. Visit arroyograndevillage.org/strawberry.asp for a complete schedule.

Full Moon Wine Bar and Bistro in Cayucos is hosting Glen Parrish in an “uncorked” gig this Sunday, May 30 from 6 to 8 p.m. (21-and-older; free!). “I’ve been the lead guitar player, and occasional vocalist, for Fresno ska band Let’s Go Bowling for many years now,” said Glen. “I’ve played many other solo performances, gigs with side projects, and studio jobs over the last 20 years. I now live in Cayucos and this will be my first solo performance on the Central Coast in nine years.” Expect acoustic versions of originals and covers. “I try to keep it PG-13 rated, but it’s in a wine bar after all, and I have no control of the content after a bottle or so,” he added with a wink.

Devastating Karate is making another trip through SLO. “We’re playing the Frog and Peach on Sunday, May 30 from 10 p.m. until closing,” said member Nick Ratliff. “Should be a good party. Also, this is our first trip back to SLO since the release of our new concept album, The Awesome Depression.”

Glen Starkey wants to meet Hemingway in 1921 Paris … and then fight him! Place your bets at gstarkey@newtimesslo.com.