Taking the measure of J

What's really in that 52-page initiative?

Amid all the claims and counter-claims from Yes on J and No on J, some voter confusion may still exist about the Dalidio Ranch development project. 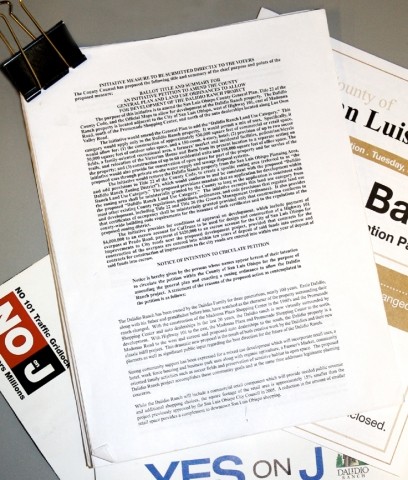 A perusal of the fine print within the complicated initiative shows that it amends the San Luis Obispo County General Plan by adding a new zone, called the Dalidio Ranch land-use category. Unlike other General Plan amendments, this one would not require an environmental impact report or other analysis under the California Environmental Quality Act, CEQA.

Rather than requiring any specific development on the site, the initiative "allows" around 530,000 square feet of commercial or retail space a four-story, 150-room hotel 198,000 square feet of office space and up to 60 housing units, as well as trails for walking or cycling, on-site water supply and sewage disposal systems, a farmers' market, and "up to two" soccer fields.

Unlike other General Plan categories, the Dalidio Ranch land-use category doesn't include any minimum parcel sizes, instead listing the parcel size range as "0 to 20 acres."

The Measure J initiative also requires that county approvals for the development be granted "ministerially," without the usual discretionary authority of the Board of Supervisors or the county Planning Commission to request changes.

Construction must conform to county building and grading requirements, but 15 other county land-use provisions specifically do not apply to the Dalidio development, according to the initiative: "No additional approvals or entitlements, including but not limited to departmental review approval, conditional use permit, land use permit, minor use permit, any approval or requirement of the resource management system, any approval or requirement of the growth management ordinance, development plan, planned development, variance, plot plan approval, zoning clearance, site plan approval, site plan review, minor use permit, or any other review or entitlement purporting to regulate or guide land use or development shall be required by the County."

Instead, the initiative spells out more than 90 of its own conditions, including a commitment that, "if feasible," retail stores should not stack goods higher than 8 feet to protect customers during an earthquake. Many of the other conditions covering geotechnical investigations, stormwater drainage, demolition and construction, tree removal, species protection, and lighting were adapted from an environmental impact report on an earlier development proposal known as the Marketplace.

The property owner is also required by the initiative to set aside $4 million toward a new Prado Road overpass, although if Caltrans cannot produce signed construction contracts within 10 years, the money must be returned.

Another provision requires the property owner to pay the city of San Luis Obispo for a share of construction costs for an extension to Calle Joaquin through the Dalidio Ranch. The amount listed in the initiative includes a typographical error "$150.000" and would also have to be returned if a contract for the new road is not signed within one year.

Typographical errors in the lengthy initiative may be corrected "without a vote of the people" as long as doing so does not create any substantial change. "No other part of this initiative measure may be altered, amended or supplemented, except upon a subsequent vote of the voters" or by an application of the landowner approved by the Board of Supervisors, the proposal says.

SIDEBAR: What else is on your ballot?

The Nov. 7 ballot is one of the longest ever, which could be one reason more than 66,000 SLO County voters are opting for absentee ballots to vote at home this year.

In addition to a plethora of candidates for city councils, school boards, community services districts, Cuesta College, and the Port San Luis Harbor District plus state judges and state propositions voters around SLO County face decisions on a variety of local measures.

Sales tax increases of one-quarter or one-half percent are on the ballot for voters in San Luis Obispo, Morro Bay, Pismo Beach, Grover Beach, and Arroyo Grande. If a sales-tax increase is approved in Arroyo Grande, voters are asked in four separate ballot measures how to spend it: transportation improvements, including upgrading the Brisco Road/Halcyon Road-Highway 101 interchange maintaining and upgrading city infrastructure, including streets and drainage expanding the police station and adding Fire Department staff and upgrading the City Hall complex to meet Americans with Disabilities Act (ADA) requirements.

In Morro Bay, elections themselves are on the ballot. Voters will decide whether any City Council vacancies should be filled by election, rather than appointment, and whether there should be a primary election, and a November runoff, for city officials.

Cambria voters again face a decision on a property tax increase to fund improvements to ambulance and paramedic staffing, a measure that failed by 74 votes to reach the required two-thirds majority in June. They will also decide on an issue of local control: whether the Cambria electorate should have to approve any extension of the water-supply service area, taking that decision out of the Community Services District board's hands.