A couple gets married, then takes the Polar Bear Dip

The bride is wearing white … Mickey Mouse ears festooned with “Mrs. Hafley” embroidered on the back. The groom is wearing a traditional black suit … and black board shorts and flip-flops. Okay, seriously, there’s nothing traditional about this wedding. It’s about 11:20 a.m. on New Year’s Day, and I’m standing on the beach near the Cayucos pier witnessing my friends Darci Rourke and Shawn Hafley get married under a blue easy-up in a service officiated by Darci’s lawyer brother Joshua Simon, a recently ordained minister who’s quoting Shakespeare, the poet James Kavanaugh, rocker Henry Rollins, and ostensibly William Goldman (The Princess Bride) before turning over a bullhorn (No, really!) for the couple to exchange their vows. 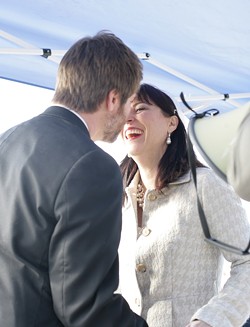 Yes, this is happening!

Soon the rings are exchanged, the couple kisses, people start blowing soap bubbles, and I wander up the beach to check out the swelling crowd of people about to participate in the annual Polar Bear Dip. Start the New Year with hypothermia! Yay!

I walk by a group of about 20 serious participants who have circled up and are going through some warm-up calisthenics; then I see four young kids purportedly dressed as Mayans carrying a piece of cardboard with the words “Sorry we were wrong” written in black marker. Hey, there’s a guy in a dog suit, his little tail sticking out of the back of red swim trunks.

I hear an announcer talking about a costume contest, and I make my way through the jovial crowd just in time to see a big-bellied guy in a bowler hat, diaper, and sash that says “2013.” Sir, I dig your chutzpah!

People are weird, but this crowd is definitely having fun, and anticipation is building because at noon, all these crazy, costumed, half-dressed people are supposed to rush into the ocean, which is about 55 degrees. People die in these water temperatures without a wetsuit. 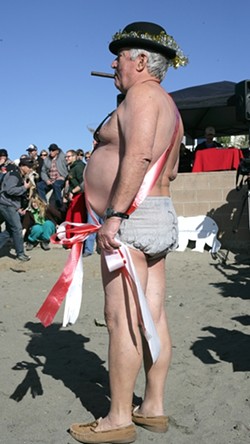 Rescue swimmers are gearing up, checking their helmets and wetsuits, putting on swim fins and checking their rescue torpedoes. More rescue personnel are in the surf on jet skis. There’s even a Coast Guard vessel floating just outside the surf line. Oh, and by the way, the surf’s pretty good: a little walled up, but some surfers are getting spectacular barrel rides before being pounded into the sand. A crowd packs nearly the entire length of the pier, and there are probably as many spectators on the beach as there are polar bear dippers on hand.

Suddenly the crowd begins to chant the countdown in unison. Then they’re off! A rush of humanity runs into the surf. Some bound farther and farther out and swim into the ocean, others scream on water contact and immediately run back to the beach. And like that, in minutes, it’s over. One thousand or so butt-cold people find their way to towels and dry clothes and usher in 2013 polar bear style. One wet, cold, happy couple clings to one another and starts a new life. Happy New Year!