Taking to the air

A new community-based radio station only a few months in the making is ready to showcase the diversity of the North Coast, and has taken to the Web while the brains behind it work to get it officially licensed and on the air. 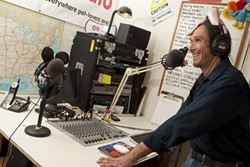 Though community leaders are now involved, the effort is undoubtedly the pet project of veteran radio host Hal Abrams. Since 2001, Abrams has been host of the nationally syndicated Animal Radio, which currently airs on more than 100 stations across the country, locally on KVEC.

Abrams settled in north Morro Bay with his wife about a year ago after taking his show on a “USA Tour,” as he calls it, moving around from Los Angeles, to Utah, Montana, back to Oxnard, and Shandon before finally settling in the harbor city.

Abrams recently sat down with New Times at his home studio, where he broadcasts his show, and discussed his past months’ work to create a radio station custom fit for the coastal communities of Los Osos, Morro Bay, and Cayucos—an “untapped market,” he said.

It’ll be months before the station can officially take to the air, but the possibility of a hyper-local, nonprofit radio station to serve the largely unrepresented North Coast has already gathered significant support from residents, businesses, and city officials.

Until recently, the project was still considered to be in its early stages. But on May 3, the station’s 12-member board of directors officially took the project to the next level.

It now has a name: Estero Bay Community Radio. They appointed officers for the application process—Abrams was appointed operation manager—and laid out a direction for how to convince the Federal Communications Commission (FCC) there’s a market diverse enough in the North Coast to justify granting the new station’s license.

And most recently, the station took to the Web—at esterobaycommunityradio.org—where it’s slowly beginning to stream music and content, which will be recycled throughout the week as more original programming comes to fruition. Once off the ground, the station aims to offer at least eight hours of programming a day, Abrams said.

But for right now, people working to get the project up and running are still looking at a proverbial blank canvas. The online station is beginning to air city meetings, sporting events, and a handful of committed original shows. Abrams said that in the coming weeks, the station will begin to stream a couple of cooking and therapy-related programs—all hosted by locals—as well as a current events talk show.

There’s also the possibility of acquiring a license to play commercial music, Abrams said, in case someone wants to be host to a music program.

One of the benefits of this particular type of station, Abrams said, is there are few limits on the types of shows that can be aired, within the realms of good taste. Politically conservative talk programming, for example, would be acceptable as long as it’s balanced with a counter view.

“The station just has to be fair and balanced and represent equal points of view; that’s something the FCC looks at when issuing licenses for a station like this,” Abrams said.

Run as a nonprofit 501(c)(3), the station would be noncommercial, meaning it would depend on private donations and possible grant opportunities.

A Virginia-based attorney specializing in guiding small projects through the FCC application process has been hired, as has an engineer. And the city of Morro Bay has donated space in its corporate yard to mount the station’s antenna at no cost.

The 100-watt frequency would allow listeners to tune in from southern Baywood-Los Osos to the northern cusp of Cayucos.

Startup costs are expected to run about $3,000, which the board is currently looking to secure. But once it’s up and running, operational costs are expected to be minimal, Abrams said, and would mostly come down to electricity bills. In the interest of keeping costs down, Abrams has volunteered his own home studio.

“I already have the studio, so why not?” he said. “We’re trying to do this as [inexpensively] as we can.”

The project has already gathered substantial support from all the right players. The Morro Bay City Council, in particular, unanimously supported the project in April at the suggestion of Councilman Noah Smukler, who was an early supporter and a member of the board of directors.

“We’re all excited about what this could bring. I’d love to see this really take off,” Smukler told New Times.

The Morro Bay Chamber of Commerce thrust its support behind Estero Bay Community Radio as well. Chamber President Craig Schmidt said he’s heard from a number of local business people who’ve expressed interest in perhaps showcasing their business or trade with a program of their own.

“I really like the direction this is going,” Schmidt told New Times. “We have no shortage of real interesting people and businesses here, and the station could be a great platform to get the word out.”

But the next six months will be crucial for the station to get through the FCC licensing process, as the commission’s window opens in January 2013. Abrams admitted that the process is tough. The federal agency is notoriously picky on which stations it permits, Abrams said, noting that it typically issues only one license per market.

“All we can do is present the best application possible,” Abrams said. “And maybe get some of the people who play golf with them to do a little lobbying for us. That would help, too.”

There remains a lot of work to be done, not the least of which is convincing the FCC that the community wants the station; that it’s worth the license. He encourages anyone interested in contributing—be it creatively, financially, or just offering general support—to contact him at hal@animalradio.com.