Tales of murder, intrigue, and scandal—short and sweet at 55 words each

New Times established the Stephen Donnellan Moss Memorial Scholarship in Journalism Fund to honor our founder by providing scholarships to deserving student journalists enrolled in Cal Poly’s journalism program. In 2017, student Megan Schellong took home the $1,500 award for the second year in a row. Applications are available to Cal Poly journalism majors during the winter term, and the scholarship fund is held with The Community Foundation San Luis Obispo County.
Make a contribution to the fund by finding 55 Fiction volumes at the Amazon Kindle ebook store. Proceeds from ebook sales go to support the scholarship fund. To find out more about the scholarship, visit cfsloco.org.

It's here again, like clockwork. For the last 30 years, around July 4, New Times has brought you reader-submitted short stories for the annual 55 Fiction contest. Death, love, disgust, and fear all make appearances, and 2016-17 even brought out a little politics. This year's judges included Arts Editor Ryah Cooley and staff writers Chris McGuinness and Peter Johnson, who prodded the stack, refining it until it held the chosen few that we just had to print. Woven in between these short masterpieces of fiction are five pieces of art, inspired by the story of each artist's choosing. 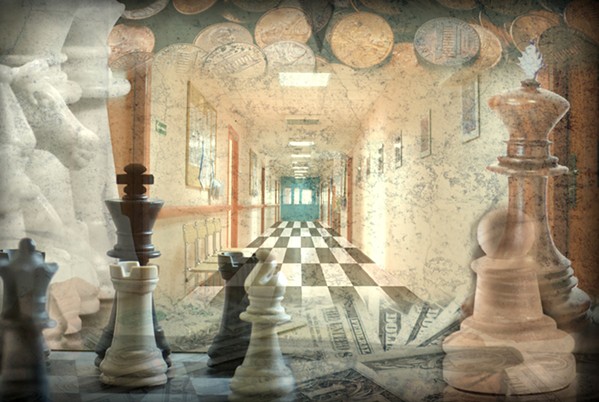 The Current State of the Chess Set

"This chess set is unusual. The pieces are in business suits, hospital gowns, and white coats."

"The Health Care Set. The larger pieces, the suits, are executives, politicians, and accountants. The small pieces, in gowns and white coats, are patients and physicians. They're the pawns."

The clock showing her she was late.

The check showing her she was underpaid.

The scale showing her she was fat.

He had no doubt it was important. It weighed on him day after day, tugging at him. It would not let go. It was constant and unceasing. But what was this relentless pressure he felt? Then it hit him. Right on the head. And all at once Isaac realized the gravity of the situation.

no U R not

But I'm your bro though

So put down the phone and pass the peas 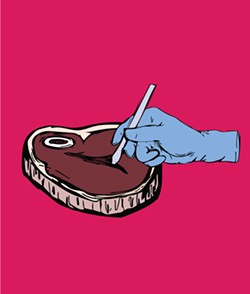 He reached for the knife, razor sharp, grasped the leg, and with a deft, practiced motion, sliced the meat straight and deep. Idly, he thought of the coming evening barbecue with friends.

Contemplating his work, he studied the tendons, muscle, bone, and blood before him with intellectual curiosity.

Kisses are just the beginning. Moonlit dreams and smoky harmonies promise eternity. But like so many times before, the dance grows stale and eternity taunts me. Embraces evaporate and hatred begins. Now she hangs in my cellar, along with the others. I visit them when the music is nostalgic and seal forever with another kiss.

He jumped out from a dark alleyway, grabbed me by the lapels, shouting: "Why are you following me?"

"Really? ... I was walking about aimlessly. Whenever I looked you were lurking somewhere in the background. ... How can you explain that?"

She searches through old boxes stuffed in out-of-the-way places.

She thinks she hears a long sigh, and then a voice ...

"Is it time for the Renaissance Fair again? Do I have to go?"

"Yes," she answers without turning around. "Yes, you do." 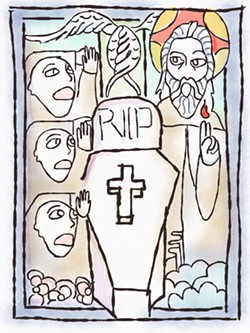 "He was always so thoughtful."

"If only God would bring him back."

"Look! There's a cloud above the coffin!"

"Is that God in the cloud?"

"I've heard your prayers. Dry your tears. I'll bring him back."

"Why?" Lana said. She tossed platinum tresses from her eyes.

She removed a pearl-handled revolver from her purse.

Lana pulled the trigger. Lance fell to the bedroom carpet. Blood oozed from his chest.

Eulogy for My Mountain Climbing Hunny

"I warned her that it was a dangerous climb in October, even for seasoned climbers. If she hadn't sprained her ankle, we beat the snowstorm and made it back down. I testify in this courtroom, before God, she was a good woman, but, it was her fault, and the rest of us were hungry."

Jim projected a profound sense of doom, of danger. It lingered in the vacuum that was left when he departed. The strength of it filled Kathy with as if an event were about to happen that would stop everything.

She looked around and saw the world covered in ashes, with everyone choking for air.

She shouted: "I heard something from the kitchen! ... No, I am not imagining things! Stop saying that! ... There is someone in the kitchen! I'm sure! ... Don't argue! Go and check!"

The crazy woman was in her bedroom, talking to someone who wasn't there. I was in the kitchen, thinking about what I should do.

"Thanks to all of you for taking the Paradise Senior Living tour today. If you have any questions ... "

"My wife just passed. Could I try one of your apartments tonight?"

"My husband left this world last week. Could I share that same apartment tonight?"

Though obtuse in most matters, the real estate tycoon rose to the top, much like curdled cream. As the collective fog cleared, authorities tried repeatedly to oust the Teflon tyrant. Only a charge of obstruction stuck.

They're Favored This Time

"I've booked Dad's trip with Time Travel Tours. Reservations were because time travel is still so new. The only date available was Thanksgiving."

"Oh, no! He's cheered for the Detroit Lions every Thanksgiving for decades!"

Take stock! I'm blindfolded, gagged, feet and hands bound and a deadly taste of bile in my mouth. Panic engulfs. Fear festers. What happened? How did things go so wrong?

"Tired of the same old lines? Want a real man to sweep you off your feet?" The ad had seemed so dreamy. 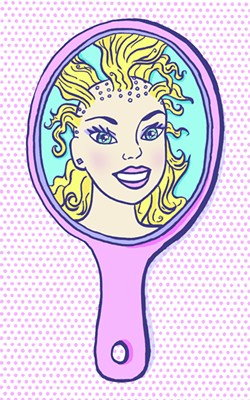 She could still remember her old doll, the shiny, blue eyes absentmindedly staring at her. Its hair was cut short in odd, choppy angles, just as hers was now. Dull anger overcame but was momentarily interrupted as the next customer (victim?) appeared.

"Just a little off the bottom please," requested the unsuspecting lady.

He comes out with rain.

With his sopping hooded sweatshirt.

With his dark eyes frowning, glistening.

He approached my car. I forward.

I gave him a nervous smile.

Superman was lying on the summit of the tallest mountain on Earth, exhausted.

Still, he couldn't escape the screams of the countless victims in need of his help.

"To hell with them! I need rest. If the world was under attack, I wouldn't move to save it!" 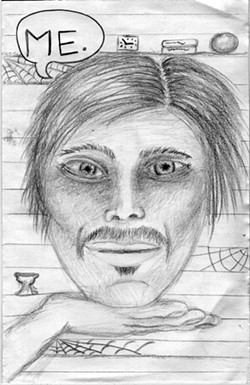 I looked around the curio shop. I'd never seen so much strangeness. Creepy statues. Peculiar tools. Disturbing amulets.

"Wow," I said to the man behind the counter. "What's the single weirdest thing in here?"

He grabbed his neck, yanked off his head with a pop, and handed it to me.

"Me," the head said, grinning.


Last Summer We Had a Bag Lady

"You leave Garbage Grandma alone," we were told when she dug through the neighborhood trash cans. Our moms canceled the Salvation Army trucks. The day she died, we snuck into her rundown shack, finding photos, toys, and trophies our parents had tossed. And the sign: "Welcome, My Family." A cop said her name was Evelyn.

He was walking down the line toward me and said something to the chef in passing.

He winced when chef yelled down the line, "Speak fucking English Flores, I can't fucking understand you."

"Why you take that shit from him?" I asked.

In 2017, student Megan Schellong took home the $1,500 award for the second year in a row. Applications are available to Cal Poly journalism majors during the winter term, and the scholarship fund is held with The Community Foundation San Luis Obispo County.