Coffee House Activists get informed and take action, after a summer break

Feeling disenfranchised from the political process, Sue Maisner has found a new way to invigorate democracy by encouraging greater citizen input to government. Maisner founded SLO Coffee House Activists, monthly nonpartisan forums wherein concerned citizens can support each other to push politicians on the issues. Gathering each month at a coffee house in SLO County, citizens discuss such topics as health care, the environment, peace, and security, and draft forceful letters to their legislators.

“Many people feel out of touch with politics because of the money that permeates the process, so we wanted to create a low-key environment where citizens can speak their minds,” said Maisner. “Legislation is always pending and personal letters are counted at a higher level than petitions, so this is an effective way to contact your legislator.”

The mission of SLO Coffee House Activists is to promote democracy through nonpartisan exchanges in friendly settings free from proselytizing or people talking past each other. 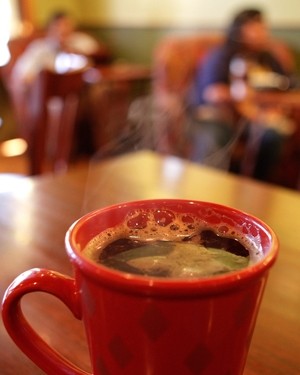 “Things obviously need to be done, and people may disagree on the best way to do it,” said Maisner. “But to have a successful democracy, citizens need to be engaged by paying attention and voting. I feel this is a good way for people to get a chance to speak up.”

Maisner views the group as an alternative to larger organizations that can seem impersonal to voters. “There’s a lot of groups doing a lot of good things, but many of them are on a national scale that can leave voters feeling like they’re not taking part in politics,” Maisner said. “What SLO Coffee House Activists allows for is coalition-building between members of these organizations, while allowing for single-issue voters to also voice their concerns.”

At each meeting, attendees are briefed on pending legislation before deliberating aspects of the bills. Letter-writing sessions follow the discussions, during which citizens draft correspondence to their legislators. “Often, it’s easier to do a task like this if you have other people around,” said Maisner. “It’s more fun, you have people to talk with and you’re not burdened with an ongoing commitment. It’s possible to avoid the long meetings and discussions and still do something.”

SLO Coffee House Activists meets monthly at various coffee houses throughout the county. The next meeting is on Oct. 16 at the Nautical Bean in San Luis Obispo, from 6 p.m. to 7:30p.m. More information on upcoming meetings is available by e-mailing slocohouse@gmail.com.