Talley Farms is known for shipping wholesale crops across the United States, Canada, and Mexico. Particularly bell peppers, of which the company can expect to ship up to 12,000 boxes per day at peak season, according to Andrea Chavez, manager of Talley Farm’s Fresh Harvest program.

But they also sell directly to the consumer.

Customers can elect to receive a monthly or weekly box of in-season fruits and vegetables through the Fresh Harvest Program. Each box contains about nine to 12 different items. 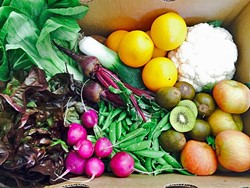 The program is coming up on its fourth anniversary, and on April 30, the Arroyo Grande-based company launched its new website, talleyfarmsfreshharvest.com, making it easier for customers to directly sign up for a box of freshly grown fruits and vegetables.

Chavez described it as a “farm to house program.” Fresh Harvest grows about 30 to 40 different types of vegetables. It’s easy on the wallet, Chavez said, costing $26 for a standard size box that can feed a family of four for at least a week.

“It would cost a lot more if you were to purchase each item separately at a farmers’ market,” Chavez said. “This is a good value.”

Artichoke season is approaching, so Chavez said to expect more of them in your CSA box.

Distribution for the Fresh Harvest program ranges from Paso Robles to Orcutt, with pickup spots at various locations, including farm supply stores, and at gyms. Chavez said her company is ready to expand the CSA program to Buellton, Lompoc, and Santa Ynez.

There are approximately 4,200 subscribers in the program, Chavez said. Although Talley Farms works to grow organic as much as it can, Chavez said that her company can’t guarantee that each week’s box will be completely organic because that would limit what you can put in the box.

The larger farm grows acres upon acres of cilantro and spinach, as well as avocados, lemons, and wine grapes on the fruit side. They also purchase crops from farmers.

To sign up for a CSA box, visit talleyfarmsfreshharvest.com, or call 489-5401.

The March of Dimes’ annual fundraising event, March for Babies, will take place at Elm Street Park in Arroyo Grande on May 14. The walk begins at 9 a.m. with registration starting at 8:30. The March of Dimes mission is to prevent premature births as well as other forms of infant mortality. Arroyo Grande residents Dan Manalo and Jamie Maraviglia lost their 2-month-old daughter, Naya, due to an illness she acquired after birth in 2011. The couple started fundraising with March of Dimes in order to honor their daughter and have raised more than $60,000. Visit marchforbabies.org or contact Maraviglia at jamiemaraviglia@gmail.com for more information or to sign up to walk.