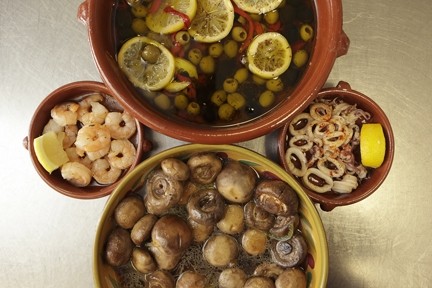 After hearing about a new café that recently opened in Arroyo Grande I stopped in on a Monday afternoon to pick up a menu and check the place out. Located in a strip mall at the corner of East Grand and Halcyon, its neighbors include a donut shop, seafood store, hair salon, and a 7-11.  But this small, cozy eatery with good food is unique, and it’s one of those few cafés in the Five Cities that is chef owned and operated. There’s nothing else like it in the immediate neighborhood, and that point alone makes it a destination for dining or refreshments. And once you’ve tried it, you’ll come back for the good food, wine, and fair prices.

The café is fairly large but is more kitchen than dining room, the latter with a bar and seats along the front window, and four tall bar tables with chairs. I peered into the cold deli case dividing the room and liked the fact their cold dishes were in the case so you can see what you’re ordering. That’s when their friendly server, Carole, came over and told me about their new happy hour. “We just started offering it today,” she explained, “it’s from 4 to 6 p.m. If you buy a beer ($3.50) or a glass of wine ($6), you can enjoy free tastes of a variety of appetizers the chef makes.”

I said I’d be back and was glad I returned. During happy hour the chef provides a selection of dishes, usually six items from the tapas menu, which changes daily. On my first visit, I tasted his very good marinated olives, a mix of black and green olives with red peppers in an olive oil, lemon, herb, and spice dressing. He also served breaded zucchini sticks, Spanish style potato, fried mozzarella-stuffed raviolis, and garlic shrimp. I loved his “pepper sauce.” Later I learned that it’s made with piquillo peppers, smoked hot paprika and tomatoes. I sopped up that delicious sauce with the veggies, pasta and the grilled baguette. The tapas are available daily and range from only $3.95 to $5.95 each.

The Mediterranean Kitchen had only been open one month when chef Mark McNeil decided to add the happy hour. He opens his café Monday through Saturday and serves food from 11 a.m. to 8 p.m. from a limited but well-chosen menu of foods. It features paella, but he changes the meats and seafood he adds to it daily. When I returned for happy hour the next day, they were still preparing the tapas. I asked Carol if he was going to offer the calamari and she said she wasn’t sure. But after pouring the glass of Tangent 2008 Riesling I ordered, she went over and informed McNeil of my request. At this point they had no idea I’m New Times’ Cuisine columnist. 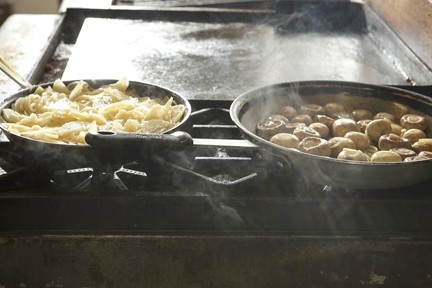 Quite generously, I must say, the chef added the fried calamari to the free tapas offered. It was crunchy outside and tender within, and excellent with the red pepper sauce. Then he sent Carol over with a taste of the paella with shrimp and Spanish chorizo he had just made—it was delicious. About then Nikki Pallesen from the Henry Wine Group, whom I knew, came in to pour Spanish wines, perfect for McNeil’s line-up of reasonably priced wines. They sat at the table next to me and she generously invited me to taste the wines, too. McNeil looked surprised and asked me: “Are you in the business?” “Yes,” I grinned in response: “I’m with New Times.”

After the wine-tasting, I talked with McNeil and admitted I was reviewing his café. I asked about the tasty chorizo and he explained that he prefers the Spanish chorizo over the Mexican version: “The Spanish chorizo is closer to the Portuguese linguica, which we’re more familiar with in this area. It has a lot of garlic, cumin, and smoked hot paprika,” McNeil said, speaking of the Portuguese community in the area. “We think of Mexican chorizo as the stuffing in tacos and burritos. It’s fattier and it can’t be cooked to be solid, that’s why you can’t grill it.” I must say, I loved the chorizo in his paella, it’s chunkier than most I’ve tried and really flavorful.

McNeil’s menu describes his cuisine: “Here at the Mediterranean Kitchen we are featuring dishes from Western Mediterranean—Italy, Southern France, Spain, and Portugal. From Italy are wonderful pastas. South of France is famous for simple seafood. Spain and Portugal give us grilled dishes, seafood paellas, and tapas.” He noted the Spanish word tapa refers to a hat or cover, such as a plate placed atop a glass of sherry to keep the bugs out of it.

According to the cookbook Tapas by Ann and Larry Walker (Chronicle Books), most people traveled through Spain on horseback or by coach in the 19th century and well into the 20th. They stopped at inns and sat in the courtyard to rest and enjoy refreshments: “It is impossible to say when and where the custom of placing a piece of bread over the glass originated. In Spanish such a lid or covering is called a tapa, from the verb tapar, ‘to cover.’ The bread kept the dust and flies and other unsavory debris swirling around the courtyard from settling into the wine. It also furnished a snack for the traveler, which encouraged another glass of wine, which was good for the innkeeper’s bottom line. It didn’t take long for an enterprising innkeeper to add a slice of ham or cheese to the bread as a further inducement to eat, drink and run up a bigger bar bill. In time the entire range of bar snacks became known as tapas.”

Locals around Arroyo Grande have enjoyed McNeil’s cuisine since the early 1980s. An AGHS graduate, he earned his degree in Electronic Engineering at Cal Poly. He original restaurant was the Bridge St. Basement, which he ran for six years then sold (it’s now Klondike’s Pizza). Carol, who worked for him at the Bridge St. eatery, told me to come back Friday for his housemade clam chowder, “It’s the best clam chowder I’ve ever had.” McNeil laughed and noted: “I would make 128 quarts of that chowder and we would still run out of it.”

McNeil worked in the computer business for a while but admitted he always wanted to get back to cooking. He leased the new site November 15, gutted the dining area, refurbished the entire room and opened to the public on Dec. 30th. Although it seems out-of-the-way, McNeil said it’s a busy intersection, many traveling Grand spot his sign and pull into the parking lot. McNeil is still tweaking the menu so we can expect more good dishes to be added to the menu, like Cataluña crema and churros.