Tapestries in The Empathy of Patience explore shared humanity

The Empathy of Patience art exhibit, featuring the tapestries of fiber artist Michael Rohde, will be on display at the SLO Museum of Art through March 17. Visit sloma.org for more information.

It all started with a shirt.

It was a very nice, hand-woven linen shirt, to be fair, that caught the eye of then biochemistry graduate student Michael Rohde.

"That started the mental curiosity about how cloth is made," said Rohde, now a fiber artist based near Thousand Oaks. 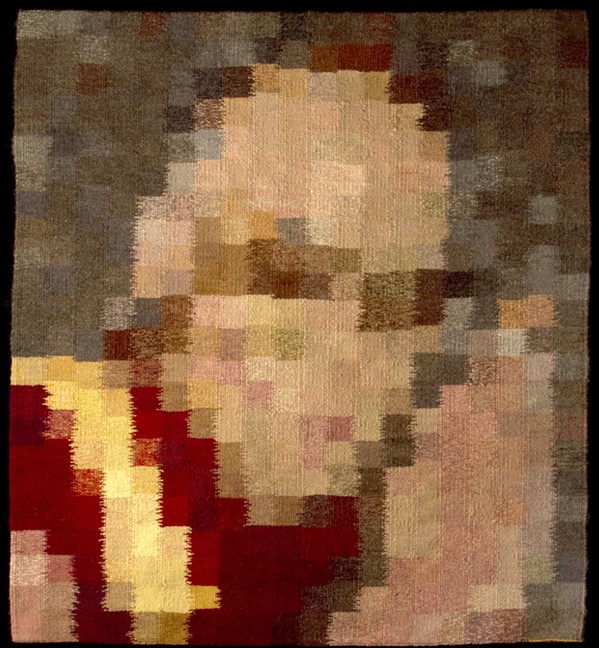 He began with making a shirt. Next, it was rugs. Now, Rohde primarily makes tapestries, which are currently on display at the San Luis Obispo Museum of Art as The Empathy of Patience: Michael F. Rohde Tapestries exhibit.

"I realized that the rugs I was making were being used on the wall rather than the floor," Rohde said.

The loom that Rohde uses works on a grid. Years ago, an art supply store owner remarked that he didn't know why fiber artists were always going against that grid by trying to make circles. Rohde took that advice to heart and now primarily works with lines, squares, and rectangles.

"I started thinking, 'Let's work with the grid and see what I can do with it,'" he said.

While none of his pieces are exactly representational, some of his pieces are certainly reminiscent of major historical and cultural icons. Colored and black-and-white squares come together to make the blurred, pixelated faces of people—including the Dalai Lama and Martin Luther King Jr. in his pieces Compassion and Dream, respectively.

"I always want to create something that is pleasing on a visual level," Rohde said. "I think the faces are a little more easy for people to respond to. A number of them, their lifestyle, the way they think about treating people is something I'm drawn to."

For all of his tapestries, Rohde dyes his own yarn, so the colors come out just right. His smaller pieces can take three weeks to finish, while a larger piece can take up to six months to complete. In his more abstract works, the artist leans heavily on colors, geometry, and shapes for inspiration. But still, his more abstract pieces aren't only about aesthetics.

"I've always loved color and how colors relate to each other," Rohde said. "If they dug deeply enough into it, they would understand it had an additional meaning."

With his shapes, Rohde hopes to create meaning, perhaps even in a literal way, so that archaeologists may one day try and decipher the code.

"I can't do the same thing for long," Rohde said. "I have to do something new." Δ

Arts Writer Ryah Cooley believes that life is a rich and varied tapestry. Contact her at rcooley@newtimesslo.com.