Many grads of teen parenting program are headed to college

Maria Hernandez does not fit the teenage-mother stereotype. As her four-year-old daughter played nearby, Hernandez talked about being married at 14, having a baby at 15, and at 16 returning to school and completing all of her high-school credits in two years. Adorning a bookshelf in the living room is evidence of Hernandez’s feat—a large trophy acknowledging her as the first student in the history of Atascadero High School to earn all of her credits in two years. “That’s amazing in itself, but even more amazing given that she’s a teen parent and single mom,” said Jannine Saldana, social worker for the Economic Opportunity Commission’s Teen Academic Parenting Program (TAPP).

Not only were the statistics against Hernandez—60 percent of mothers who have a child before they turn 18 do not graduate from high school—but she lacked encouragement from her family. Hernandez’s husband was against her going to school, and no one in her own family had graduated from high school. When her husband returned to Mexico, Hernandez made the decision to complete her education.

“I really wanted to finish high school so I could get a better job and support my daughter,” Hernandez said.

Hernandez is one of 48 teen moms in TAPP who graduated from high school in June. Among these graduates, half plan to go to college in the fall, including Hernandez who intends to pursue a career in nursing. “I’m so proud of these girls,” Saldana said. “It just shows that with encouragement and determination they can do anything.”

Encouraging pregnant and parenting teens to complete their educational goals is one of the key components of TAPP.

Social workers assist pregnant and parenting teens with transportation, connect them to EOC subsidized childcare, give them opportunities to tour Allan Hancock and Cuesta community colleges, and help them fill out college applications and access financial aid.

“The main focus is to get them through high school, then college is an added bonus,” said Colleen Ryan, a TAPP social worker who works in South County.

TAPP also helps the teens access medical care and other services, learn parenting skills, and make healthy life choices. “We have a good solid team,” said Program Supervisor Tracy Lang Wood. “They (the social workers) are passionate about the population, educated on the issues, and able to support the youth in a positive way during what could be a challenging time.” 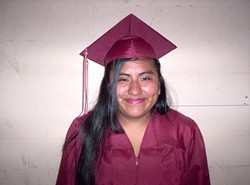 TAPP participant Joanna Torres knows all too well the challenges encountered by teenage parents. “What challenges didn’t I face?” the 17-year old quickly retorted when asked about the challenges of finishing high school while tending to a newborn. “Everyone kept telling me I wasn’t going to make it. I went to school, picked up my daughter, and worked. It was hard.” Torres’ situation was made even more difficult by her parents, who pressured her to stay home and babysit her younger brother and own baby rather than return to school. “She could have easily dropped out,” said Saldana. “We said, ‘Come on, you can do it.’” With the support of the TAPP social workers and the baby’s father, Torres graduated in June. “I felt like crying,” Torres said. “I didn’t think I was going to be able to do it.”

Torres now plans to attend Cuesta College and take classes in early childhood education. Though there will be continued challenges as she attends college, works, and raises her child, Torres acknowledged the upside to it all. “When she wakes me up with her slobber kiss,” Torres said of her 8-month old daughter, “it makes me have a good day.”

Funding for TAPP comes from the state Adolescent Family Life Program, a contract with the County of San Luis Obispo Social Services, the Community Development Block Grant program, and community donations. The program relies on community donations to offer the teens “motivational redirectives” and rewards, such as this year’s $20 gift card to each graduate. For more information, call 544-5033.

Shawna Galassi Saperstein is a freelance writer who also works for the EOC. She supplied this article to the New Times.