Target practice in Santa Margarita: We came, we shot, we ate 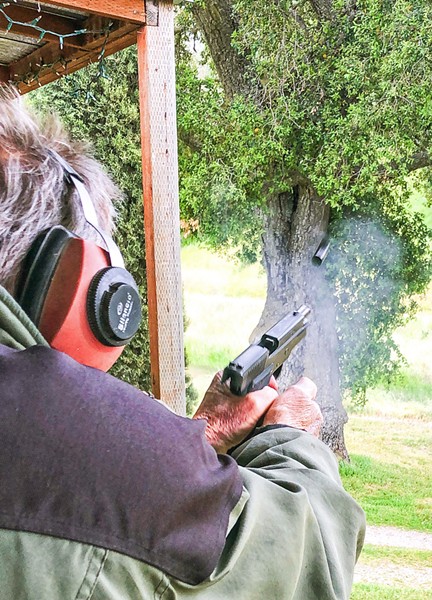 Photos By Glen Starkey IT NEVER STOOD A CHANCE This old shovel ate lead but remained standing, one of the many improvised targets in Don's "plinking gallery."

We're heading out Highway 58, just outside Santa Margarita, to visit our friends Don Lampson—a well-known local musician with a voice that sounds like rusted shovels bouncing in the back of an old pickup truck running down a dirt road, but in a good way—and his paramour, Peg Grady, an artist with a wickedly irreverent sense of humor who paints and stitches and puts weird stuff together to create even weirder, but always more interesting, stuff.

They've invited us out for some target practice and chow—two things Anna and I are always ready for. Peg's a wiz in the kitchen, and we've been promised ceviche!

As we arrive, Don's on their home's covered patio, surveying the couple's 13 acres of rolling green hills, their pond, their low-slung barn, and the handful of feral cats Peg's trapped and had neutered or spayed. Gophers have short lifespans around these parts, and a gray cat named Tippy with a rodent in its mouth disappears under the house. Apparently, this area's the place to go if you want to abandon your pet like a reprobate.

We waste little time before the guns are out.

"What are you gonna do?" Peg asks Don.

"I'm gonna start slingin' lead," Don responds, clicking a magazine into his .45. "You got ear protection?"

We do. This ain't our first rodeo. We take turns cracking off shots into Don's "plinking gallery," where he's hung pots, pans, pieces of metal, old tools—anything that'll make a "ting" when it's hit—from the trees or sticking out of the ground.

Their little ranch is beautiful and populated by the local flora and fauna—including a wild turkey that momentarily curtailed our target practice by wandering through the target area, apparently not flummoxed by the sound of gunshots.

Don's a Vietnam vet who served at tour in 1966-67, and both he and Peg worked as prison guards, so they're no strangers to target practice. Peg says she hasn't shot in years, then picks up a .22 revolver and pops three in a row into a hanging piece of metal.

Don cracks off a few more shots, and Peg asks, "Did you shoot five or six?"

"Well, in all this excitement, I forgot to count," Don deadpans in his best Dirty Harry Callahan impression.

I ask Peg whether her distant neighbors mind all the gunshots, and she assures me it's common.

"In most places when you hear gunshots, you're like, 'Holy fuck! Gun shots! Terrorist! Very fine people are coming to kill us!' Here we don't even notice," she says.

Don grills some of Peg's marinated shrimp and some beer brats on his old Weber, and soon we're chowing down, satisfied that we're all deadly as hell and sure that of the "very fine people on both sides," we're definitely on the good side. Δ

New Times Senior Staff Writer Glen Starkey is on your side. Contact him at gstarkey@newtimesslo.com.