It’s hardly surprising that accounts of a barroom scuffle involving pepper spray, repeated tasings, three police officers, and a skinny 23-year-old differ drastically depending on whether it’s the arresting officers or the defendant talking. 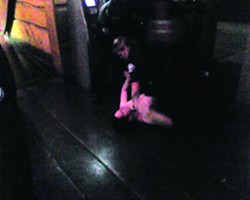 The matter could be settled once and for all with accurate, unbiased recordings of the incident (which should exist), but six months after the incident, the only video evidence that the District Attorney’s office had furnished to the defense is squad car footage that doesn’t start until the suspect has been handcuffed and a cumulative minute of Taser footage with audio that starts and stops, according to defense attorney Lou Koory.

“It’s the only objective view, and poof! It’s gone,” Koory said. “They’re handcuffing [him] in his defense.”

As New Times previously reported, Cpl. Mark Martin of the Morro Bay Police Department (MBPD) said in an arrest report that he was conducting a bar check at Morro Bay’s Fuel Dock Saloon just after midnight on June 8 when he was shoulder-bumped and taunted by a drunken Brian Lopez Martinez, who resisted violently when police attempted to take him into custody for unwanted battery and public intoxication.

Lopez Martinez denied that any such contact occurred and said he struggled to remain in the bar but never struck the officers.

A subordinate officer, Nicole Canby, corroborated Martin’s side of the story. At the time, Canby was a recent transfer to the department and was training under Martin, who’s been with MBPD for 10 years.

No bystanders have come forward claiming to have seen the bump that allegedly prompted the incident. Several witnesses, including sober bar staff, reported that Lopez Martinez was calm and coherent before Martin grabbed him by the arm. None saw Lopez Martinez throw any punches, and all were shocked to see officers deploying pepper spray and multiple zaps from a Taser gun to subdue him.

After the incident, concerned business owners met with the interim police chief, a commander, the city manager and other city officials to discuss ways to improve the relationship between police officers and establishments with liquor licenses.

“I really think this is an opportunity to set an example of how to be responsible with adults who are allowed to drink,” Fuel Dock owner Casey Kelso said.

Kelso said that stakeholders discussed ways to encourage safe drinking practices, including the organized use of designated drivers and allowing bar patrons to walk home without having to worry about getting arrested for public intoxication.

Alan Bond, a private investigator and former police officer, said that a person should be drunk to the point of being unable to care for him- or herself before police can make a legitimate arrest, but it’s difficult to prove how drunk someone was and no breath or blood tests are administered for a drunk in public, which allows officers to make their own judgments.

Multiple sources have told New Times that Cpl. Martin is known around town as an aggressive, somewhat heavy-handed officer, and shortly after the stakeholder meeting, Martin was rescheduled to work the day shift, though MBPD spokesperson Commander Bryan Millard said the shift change was a coincidence. Officers typically rotate every four months between day and night shifts. If Martin’s shift changed, everybody’s shift changed, Millard said.

According to the MBPD policy manual, officers should verbally warn a suspect before deploying Tasers or pepper spray, although the manual’s language allows for exceptions when a delay would endanger officers. No warnings were included in officers’ descriptions of Lopez Martin’s arrest.

The policy manual also requires that officers wear a personal tape recorder and use it to document “all field contacts involving actual or potential criminal conduct … arrests … self-initiated activity in which the officer would normally notify dispatch … and any other contact that becomes adversarial after the initial contact.”

Corporal Martin and Officer Canby were on site when the scuffle began, and Sgt. Su Gomes arrived shortly afterward as back up, according to incident reports. But between the three officers, zero personal audio recordings have been supplied to the defense.

In her report, Gomes wrote that she parked her squad car pointing toward Fuel Dock’s rear entrance when she arrived on scene, with the specific intent of capturing the fight with the car’s camera.

“However, I later learned the [camera] had not activated and I was unable to retrieve a recording,” Gomes wrote.

According to the policy manual, squad car surveillance systems should be tested at the beginning of each shift. The camera should be programmed to come on automatically whenever the vehicle’s emergency lights are in use, like when the car is parked sideways in the street during a barroom arrest, for example.

The scene also was stutteringly recorded by a camera attached to Martin’s Taser gun, a camera that activates automatically when the gun’s safety switch is flipped, according the policy manual.

Bond said such recording equipment is generally reliable and that officers regularly check the devices before going into the field.

“The whole purpose of having a recording is for officer safety and to protect against frivilous lawsuits,” Bond said. “They always seem to work when it shows cops being victimized. It’s funny how it doesn’t work when there’s something in question.”

Because the investigation remains ongoing, MBPD spokesperson Commander Millard could not describe exactly what evidence his department has given to the District Attorney’s office, but he said that they have handed everything they’ve got to the DA.

Prompted by questions from New Times, Chief Deputy DA Jerret Gran met with the case prosecutor, David Pomeroy, to figure out what happened with the recordings. Gran said that Koory requested all of the video months ago as part of an unusually long list of demands for a misdemeanor case. Two to three weeks ago, Koory asked for the Taser footage specifically, and just before this article went to press, Pomeroy acquired the Taser footage and told his discovery team to forward it to the defense, Gran said.

Lopez Martinez has said that he plans to file a claim against MBPD alleging police brutality, but the six-month statute of limitations on such claims will expire on Dec. 8.

He will likely have to file for an extension, because his claim can’t move forward until his current case is settled. According to Koory, Lopez Martinez can’t sue MBPD or the city for abuse if he’s found guilty of resisting.

A whole bar full of witnesses saw him resist, so defending Lopez Martinez won’t be easy. He can get off, however, if Koory can prove that police officers were acting unlawfully by attempting to detain his client without probable cause or that they used excessive force.

MBPD maintains that the arrest was legal and that the use of force was justified.